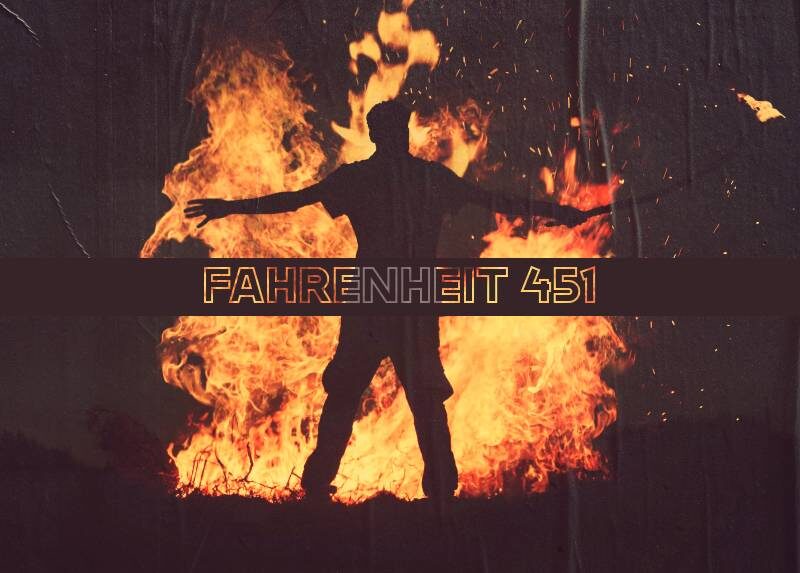 The colour white appears an awful lot in Ray Bradbury’s novel Fahrenheit 451 – but what does it mean?

The colour white is everywhere in Fahrenheit 451. Bradbury even uses it far more than red and orange (and this in a book about fire and flame).

Only black appears more often, yet this includes the surname of one of the characters. It also describes things which are commonly black. But white, as you’ll see, is a more unusual case.

This article explains what the colour reveals about core themes in Ray Bradbury’s novel Fahrenheit 451 – with spoilers.

What is Fahrenheit 451 about?

Published in 1953, Fahrenheit 451 describes a dystopian future in which books are banned. It’s up to firemen like Guy Montag to seek out and destroy them. His job is to burn books – and it’s a job he enjoys.

Then Montag meets Clarisse McClellan. Her curiosity and joy about the world makes him wonder what’s in the books he’s burning. Soon Montag has to choose between knowledge and survival.

Bradbury’s sci-fi novel is brief yet bursting with poetic images. It now has cult, classic status, though it’s similar to Orwell’s 1984 in places. More of that below.

Bradbury’s novel is a peculiarly white world. The characters are all white people, at least as far as Bradbury describes them. Yet they wear their whiteness in quite jarring ways: consider Bradbury’s use of metaphors of snow, silver, and marble, for instance.

The first character Montag meets is Clarisse McClellan. He senses her before he sees her, in shades of white. “Each time he made the turn, he saw only white, unused, buckling sidewalk”. Finally he sets eyes on her, noting variously that:

“Her face was slender and milk-white … Her dress was white … the white stir of her face … her face as bright as snow in the moonlight … her face, turned to him now, was fragile milk crystal”

So Clarisse is white, and wears white. She even radiates whiteness, and leaves Montag with a “white silence”.

After their encounter, Montag goes home to his wife, Mildred. She too is a white character – her face is “like a snow-covered island”. Later Montag thinks of her in less alluring terms: “white bacon. He could remember her no other way.”

Mildred lives for her TV shows. These are shown on wall-sized screens, and are interactive and always on. Mildred considers the people in her TV to be her family. One of her favourite shows is even called the White Clown.

So people are white and clowns are white. Side walks, smells and silence are white. White is everywhere. But what does it mean?

Mildred and Clarisse are prominently described in terms of whiteness. Unfortunately they don’t exist as rounded characters or women in their own right. They’re a counterpoint for Montag: they reflect the ‘manly’ choices he must make.

Of course, he’s married to Mildred. But their marriage is meaningless and filled with loneliness (on both sides). When he goes home after meeting Clarisse, the bedroom is like a marble tomb – in part because Mildred has taken an overdose.

The darkness in their house isn’t just because it’s night time. There’s a lack of light because there’s no love, no common ground, and no joy about the natural world.

This is in stark contrast to Clarisse. Mildred is old and distant; she belongs to the sinful, unthinking city. Clarisse is young and alive. She’s described in terms of pastoral innocence and nostalgia: “They walked in the warm-cool blowing night on the silvered pavement and there was the faintest breath of fresh apricots and strawberries in the air”.

Clarisse represents life and potential, while Mildred stands for death and stagnation. Montag stands between them, unsure of which path to follow. Instead, he is a carbon copy fireman, ruddy and dark:

“Had he ever seen a fireman that didn’t have black hair, black brows, a fiery face?”

Montag isn’t like Mildred, and he isn’t like Clarisse (though he’d like to be). He’s neither dead nor alive. He’s in a kind of limbo, just waking up to his innate unhappiness and the injustice all around him.

It’s interesting that white is stacked between purity on the one hand, and emptiness on the other. It stops short of racialised colourism and cognitive bias as we understand it today, where whiteness stands for the ‘good’ and blackness the ‘bad’.

And yet, it comes uncomfortably close. When Montag escapes from the city, he recognises fire in a new way:

“That small motion, the white and red colour, a strange fire because it meant a different thing to him.
It was not burning; it was warming!”

That fire is a symbol for hope and regeneration. Until this point, Montag knows only fire’s destructive potential, a force described in much ‘darker’ language. The book even begins: “It was a special pleasure to see things eaten, to see things blackened and changed.” [Emphasis added]

Likewise, Montag’s fight throughout is against darkness: of night, of ignorance and the death of consumerism. It’s also here that the book feels closest to George Orwell’s 1984.

Both books hint at the dangers of unthinking consumerism, where various freedoms and life itself are given up in exchange for trivial entertainments. This is what the White Clown stands for.

The White Clown is a malevolent force, though Mildred can’t see it:

“A minute later, three White Cartoon Clowns chopped off each other’s limbs to the accompaniment of immense incoming tides of laughter.”

Yet Mildred and her friends can’t turn away, preferring these images to their own husbands (see also Do Androids Dream of Electric Sheep?). They prefer the safety of not thinking about things too deeply, and find books and knowledge a disturbing phenomenon.

It’s this which links Bradbury’s dystopian future with our own digital age (see also E.M. Foster’s short story, The Machine Stops). Montag’s choice is one technology asks us to make repeatedly and every day: books or screens? Entertainment or exploration? Consumerism or the path less known?

Montag chooses to break free of ‘the matrix’. The book’s ending condones this in almost biblical imagery. The city – the source of sin and stupidity – is annihilated. Life begins over, in the purer countryside. The thinking man’s time has come.