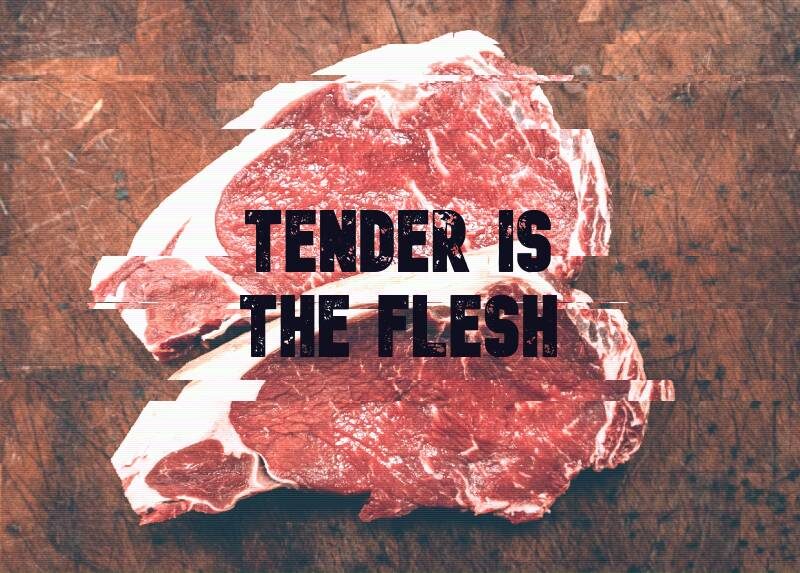 Tender is the Flesh serves up a dystopia in which animals are off the menu and eating humans is the norm. But what do we talk about when we talk about cannibalism?

Marcos Tejo runs a slaughterhouse. What do they slaughter? People. It’s completely legal – in fact, after a virus destroys the animal population, they’re the only source of meat.

The industry is shrouded in euphemisms. This is “special meat”, and the humans raised for consumption known only as “heads”. It’s illegal to eat people with a first and last name … unless you find a loophole.

While some revel in this new taste for the taboo, for Marcos the slaughterhouse masks grief and heartbreak.

This page considers ways of interpreting Tender is the Flesh, by Argentinian novelist Agustina Bazterrica – with spoilers. Like the book, it won’t be suitable for everyone.

A 2017 episode of journalism podcast The Tip-off describes how a journalist at the Washington Post uncovered systemic torture at Syria’s notorious Hospital 601, revealing: “the hospitals were slaughterhouses”.

Torture is nothing new – and certainly isn’t confined to foreign nations. War is often a backdrop, though not always. Incidents reveal we’re drawn to blood lust and sadism, especially against those seen as inferior or weaker. Sometimes it’s for revenge or control. Sometimes it’s just for kicks.

Agustina Bazterrica’s novel is set in a future in which everyone is complicit in mass killing. But is the present really so different?

Science fiction uses imagined and future worlds to show us ourselves in the here and now. Tender is the Flesh, then, is alternate universe, forecast and allegory – all at once.

The novel asks: what circumstances could make us view cannibalism as unavoidable, excusable or even stylish?

But given the commonality of torture of humans by humans, perhaps the is: why haven’t we already embraced it?

We can read the book as a commentary on doublethink. Like its characters, we use words to mask exploitation and cruelty, especially when it’s done in our name.

The art of eating people

The bread and wine of the Christian ritual of the Eucharist represents the flesh and blood of Jesus Christ. Whether you take this literally depends on your beliefs (a paradox Armistead Maupin played with in More Tales of the City).

Real-life cannibalism is typically about survival, as per the 1972 Andes plane crash or rumours of the Donner Party (see also The Shining). But sometimes it’s just about fetish.

There are reports of primitive tribes who indulge – though there’s controversy about how much we colour these to suit our world view or colonial ambitions. You could say the same about how we talk about the religious rites above. Like allegations of cannibalism, it can be a means of Othering.

Sayaka Murata’s novel Earthlings uses forbidden meat as a response to alienation and abuse. The Silence of the Lambs once revolted us; now Hannibal Lecter has his own streaming series.

If our tastes for fiction suggest eating each other is inevitable, Tender is the Flesh shows us how it might play out. Rather than survival or secret shame, the cannibalism in Bazterrica’s book is social contract.

Some of her characters call it a government plot to fix overpopulation. Incidentally, the book was published in Spain in 2017, but their responses feel reminiscent of Covid conspiracy thinking.

Others accept it as necessary evil because giving up meat is more unthinkable (read this in light of Argentina’s beef-dominated economic and culinary history). There are social rewards, too. When Marcos’s sister keeps a head in her closet to eat alive, she does it for kudos.

Such is the desire for flesh that some are willing to murder to have it. The scavengers are derided as crazed zombies and social outcasts, yet they only do what everyone else also does.

Ultimately, whether such things are acceptable or not depends on where you stand in the hierarchy. It’s all a question of phrasing.

Hence people raised for meat can no longer be referred to as human; they’re heads or cuts of meat. Stripping away their humanity means they can be used and abused in horrific ways, from torture and rape to murder and consumption.

Tellingly, their vocal chords are removed. It protects those working in farms and slaughterhouses from the screams. But if language is unique to humans, removing the ability to speak or sing or scream is a system that turns people into beasts.

The meat industries rapidly adapt to human flesh, but in fact the processes are identical. Like cattle, the ‘heads’ are stunned then bled out. Carcasses are de-haired and skinned. The body is deconstructed according to its place in the consumer chain: offal, best cuts, joints, specialities.

The book’s dissection of human flesh is overwhelming … and yet the similarity with how we treat animals is hard to overlook.

Our rearing of animals for meat and dairy is no less ‘inhumane’ than that described in the book. We talk of beef and veal rather than cows and calves. Words like free-range and grass-fed suggest rural paradise rather than slaughter.

This doesn’t necessarily make Tender is the Flesh vegan propaganda. Rather, it highlights the contradictions we live with: we love animals, yet own them or eat them. We love our fellow humans … yet we can stomach their torture.

We turn our recognition of humanity in others on and off as convenient. Sometimes this is writ large in colonialist attitudes, but eating special meat is also metaphor for exploitation of human capital, and of those who have less.

There’s often a before and after to sci-fi and speculative fiction. Descriptions of the before connect readers to an unrecognisable future world, while the transition joins the dots.

In Tender is the Flesh, transition begins with a virus that renders animals unfit to eat.

While revolting, the first transgressions: “instilled the idea in society that in the end, meat is meat, it doesn’t matter where it’s from.”

Transition is key to science fiction’s dystopia worlds. Sometimes radical change creeps in; other times it follows war or revolution. Either way, protagonists can’t stop remembering how things used to be, and desiring more authentic times. The future, fiction tells us, is often fake or fatal.

Note these similarities in particular:

Marcos always describes people by how their words feel.

His boss, Señor Urami, similarly “needs to reaffirm reality through words, as though words created and maintain the world in which he lives.” He’s not the only one. His fellow citizens redefine words to hide meaning and strip away humanity, to make the revolting palatable, and to excuse inhumanity.

With his dying father, Marcos intuits the words:

“were held together by the thinnest of transparent threads.”

Meanwhile his sister’s brats use language as a code to exclude others.

The voices of women lift him up and cast him down. They stab at him and pin him in place. At first his wife’s voice lifts him out of his worries. Then their son dies, and “Cecilia’s words became black holes, they began to disappear into themselves.”

Words have turned the world monstrous; no wonder Marcos frames people through their use of language. At the same time, the fixation reveals a man burning with grief.

The loss of his infant son is a grief that won’t go away and can’t be spoken of. His bereavement is treated as secondary to Cecilia’s; he lacks the space to name his pain and release it.

There’s also the inevitable grief of tomorrow, i.e., his sick father. But there’s also a grief for the time before transition, when animals existed (albeit in cages) and humans weren’t damned to only kill or be killed.

There are two horrors to the book. There’s the industrialisation of human suffering, but also the inescapable isolation of grieving. Both underline the frailty and futility of being human.

Marcos may be grieving, but his response to women is telling. His wife is as emotionally available as a slab of meat, the sister utterly vacuous. But is Marcos any better?

The stomach-churning description of pregnant female heads comes back to bite in the way he screws Spanel: on the cutting table, next to the dripping carcasses. She becomes one more piece of meat, a vehicle for sexual and emotional release.

Ultimately, this scene unmasks the red herring. Marcos’s tenderness towards his captive female head suggests the redemption of forbidden love. It’s easy to misinterpret his watching her on his phone as tenderness.

In fact, he watches the female for exactly the same way his boss watches the slaughterhouse: proprietorial oversight.

Marcos claims to be repulsed by the use and abuse of human cattle. But when it’s most convenient, he swiftly despatches the female who gave birth to his child just moments before. He clubs her to death – exactly as Sergio does in the slaughterhouse.

This is the moment that he finds his own methods of calming the kill. Sergio whispers a secret phrase; Marcos sings ‘Summertime’.

In the end, he enjoys her company like he enjoyed his dogs, Koko and Pugliese. He removes her in the same way, too, describing her as a pet who comes to resemble its owner … but is still only an animal.

The new baby plugs the grief that’s been bleeding Marcos and Cecilia dry. And it gives him his voice back, freeing him from silence. Now his words, like those of the others, have power:

“his voice radiant, so pure it wounds.”

There are a number of ways of interpreting Bazterrica’s portrayal of cannibal society. It’s an allegory for human and animal exploitation, for the hollowness of grief; it’s a comment on overpopulation and environmental catastrophe.

Like Sayaka Murata’s Earthlings, it’s also an expression of isolation – of people who don’t belong. But the book’s trick is making us believe Marcos is an outsider, that he doesn’t fit because he’s still human, because he cares for people and puppies.

It’s no surprise that immigrants and the poor are the first to disappear during the transition. But even before cannibalism becomes legal, black people are hunted in Africa. Perhaps there’s never a clean break between the past and future horrors but rather a slow slide towards inhumanity.

Those who break the rules about breeding with heads risk finding themselves trapped in the slaughter cycle, too. This is the tension Marcos faces – except he has connections in high places, and knows which strings to pull.

In the end, those on the edges of society unlock the book’s commentary. The scavengers can’t be bound by hypocritical limits on decency.

The transition is a watershed moment; it neutralises the taboo on eating each other. Having embraced inhumanity, it’s naive to think there could still be boundaries.

Tender is the Flesh, by Agustina Bazterrica (translated by Sarah Moses)