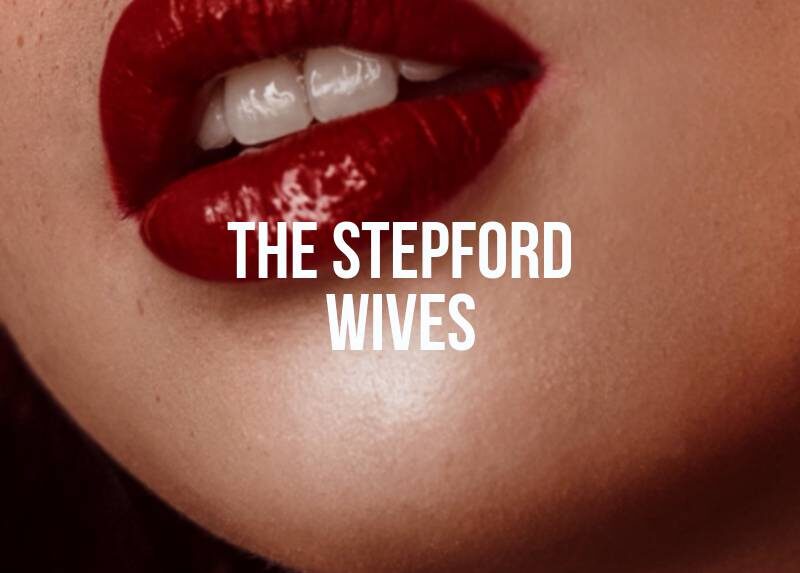 In The Stepford Wives, Ira Levin imagines a world in which women are man-made and feminism doesn’t exist.

Published in 1985, The Handmaid’s Tale anticipates a violent regime that strips away women’s rights and turns them into servants and breeders.

More than a decade before Margaret Atwood, however, Ira Levin explored the feminist dystopia in his novel The Stepford Wives.

Both books speculate on life in the West without women’s lib and feminism.

But in Stepford, this reverse revolution arrives with secrecy and stealth rather than guns and violence. And rather than reducing women to drudges, it elevates them to flawless goddesses – on the surface, anyway.

The message remains relevant for anyone reading the book now. In our highly televised era (social media as much as TV), this kind of cosmetic and plastic surgery perfection is everywhere … and inescapable.

The angel in the house

In the book, ‘real’ women are a bit messy around the edges. They don’t always have time to clean house, cook from scratch or be perfectly made-up – and that’s OK.

Similarly, contemporary TV ads like this beauty advert, have real women rush onto the beaches in plus-size bikinis. Real women, the message goes, are flawed but fabulous.

Both women suspect something disturbing is happening to the women in Stepford, unlike in Norwood and other towns nearby. Joanna comments:

“I went into Norwood to get my hair done for your party; I saw a dozen women who were rushed and sloppy and irritated and alive; I wanted to hug every one of them!”

What bothers Joanna and Bobbie about Stepford, of course, is that the other wives aren’t real, they’re perfect.

Frankly, she sounds terrifying. But then Joanna realises the other wives are the same.

The Stepford wives don’t get messy. And they don’t have personal interests – they only care about their husbands, homes and children (see also Rosemary’s Baby).

As dull as these women sound, they represent the ideal woman, at least according to the Stepford Men’s Association. In fact, the men pool their desires and create a template of femininity: docile, beautiful, clean, ego-less … and bosomy.

This reeks of Victorianism, an era when respectable women are delicate, ethereal creatures incapable of strenuous activity or deep intelligence. They were home bodies confined to the domestic realm (‘the angel in the house’).

This is exactly what the men of Stepford hope to recreate.

Related: Motherhood on trial in horror film The Nanny

Being anything like a Stepford wife doesn’t come naturally for most women, which is why we’ve ditched impossible Victorian ideals and other social tyrannies (kinda).

Most women would struggle to be as perfect and unselfish as the Stepford wives. The Stepford men recognise this, and so take a more impatient gear: they force the transformation.

Levin doesn’t explain the process in detail but it involves a blend of engineering, design and chemistry. Each husband whisks his wife away for the weekend. When they return, they are Stepford Wives.

In fact, the women become robots. They may even be dead, and animated entirely by some form of animatronics and preservatives.

We know they’re incapable of free speech because Claude Axhelm gets each wife to record herself speaking. This is presumably to programme the creature that will replace her after death.

The others even call Claude Henry Higgins, a character in George Bernard Shaw’s 1912 play, Pygmalion (later adapted as the musical My Fair Lady).

The Greek myth of Pygmalion sees a sculptor fall in love with a statue. In Shaw’s play, professor of phonetics Higgins plucks a flower girl from the streets and, by teaching her how to speak and act, turns her into a lady.

What connects Stepford with Shaw’s play – aside from the modification of women – is the idea that women can only learn what men teach them.

Without this they’re just empty vessels waiting to be filled with [a lesser version of] male knowledge and male standards of perfection.

At the end of the book, Joanna Eberhart becomes a Stepford wife. What are we to make of this?

Well, note that she’s not Levin’s only heroine who falls at the final hurdle. In Rosemary’s Baby, Rosemary Woodhouse similarly accepts her fate.

As a response to the “pent-up male reaction to the Women’s Liberation Movement” [Chuck Palahniuk writing in the introduction to The Stepford Wives], Levin seems to suggest that patriarchy is inevitable. Or, as Joanna finds at the end of the novel:

“Every man was a threat, every car a danger.”

There are two consequences to this.

Firstly, we get the impression that male desire is a clichéd, childish toy. Men need attractive, selfless, docile young women. They’ll happily leave or switch wives to get what they want. Secondly, women can’t escape from this ideal.

But ultimately, it all seems short-sighted.

The men may have created flawless robots, but the robots are only capable of care, not love. They listen without interrupting but have no interest in what the men might have to say. They have no choice, so the attention they pay is valueless.

On the other hand, removing individuality also removes worry.

When all the women exist to shop and clean, they have nothing to stress about. At the end of the novel, Joanna confides:

“Housework’s enough for me. I used to feel I had to have other interests, but I’m more at ease with myself now. I’m much happier too, and so is my family. That’s what counts, isn’t it?”

By turning their wives into zombies, the Men’s Association achieves female happiness, and the greater social good.

However, by creating a society that reserves true intimacy between men, it’s may even be the case that the Stepford husbands aren’t truly interested in women at all.

Consumerism in The Stepford Wives

Another way of reading The Stepford Wives is as a commentary on consumerism, and how non-conformity is a threat to that way of life and doing business.

It’s telling that when the Stepford wives finally leave their homes, it’s to go shopping. Consider Mary Ann’s response when Joanna meets her in the supermarket:

Consumerism is inescapable – an idea which can also be said to be true of contemporary life.

It seems that, as the novel comes to a close, Royal Hendry also knows this. His wife, Ruthanne – like Joanna – has her indulgent hobbies and interests instead of looking after her man-child husband with his sticky-taped glasses.

When Royal agrees to take the kids out of pizza, he has plenty of reason to be unhurried and amenable. He’s already booked in a weekend away with his wife. Her cards are already marked. Her time will come.

Sunshine (2007) explained: the sound of inevitability