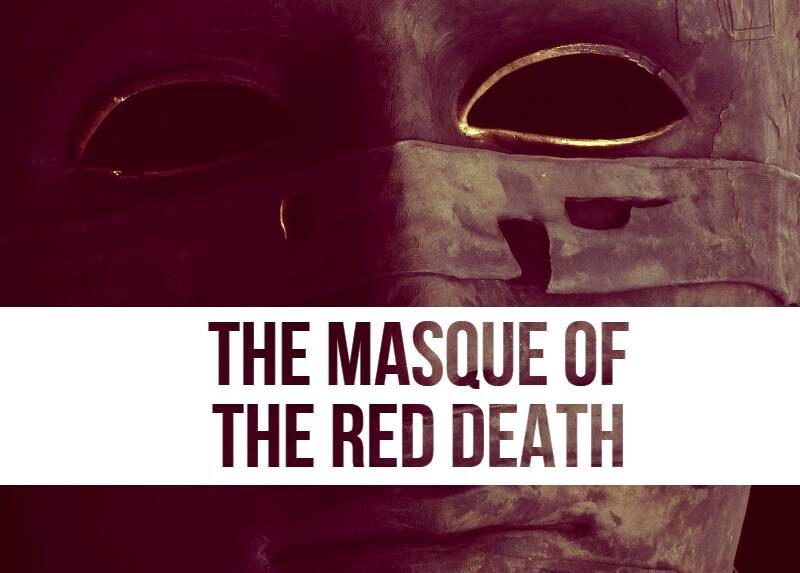 Edgar Allan Poe’s gothic story The Masque of the Red Death rings true to the horrors of Covid and self-interestedness.

What is the Masque of the Red Death about?

A virulent plague is sweeping the country, and half the population has died. Prince Prospero retreats to his castle to drink and dance until the disease known as the “Red Death” is over. Then a stranger joins the party seemingly dressed as a plague victim. But this is no costume …

Poe was no stranger to pandemics. Cholera and yellow fever killed tens of thousands across America in the 1830s and 1840s, particularly among poorer communities. Poe even caught cholera himself in 1849 and expected to die.

There’s a clear influence between the pandemics Poe lived through and the plague of his 1842 short story.

Cholera spread through contaminated food, water and sewage, causing intense diarrhoea, vomiting and muscle spasms. Sometimes death would follow within hours. Compare this with Poe’s grim description of a plague in The Masque of the Red Death:

“There were sharp pains, and sudden dizziness, and then profuse bleeding at the pores […] And the whole seizure, progress and termination of the disease, were the incidents of half an hour.”

Like cholera at the time, the Red Death had no known cause or cure. The spectre of the real-life disease must surely have felt as frightening and inexorable as Poe’s fictionalised plague.

Almost 100 years later, this resonates with the Coronavirus pandemic. For all the advances of modern medical science, disease can still hold seemingly “illimitable dominion over all”.

Moreover, social inequality continues to push the biggest burdens onto the most vulnerable and poorest communities, while the super rich buy freedom from Covid restrictions.

If our experiences of Covid have shed light on the inequality of healthcare, Poe’s story appears to go one further in its treatment of amoral politicians and the self-interested wealthy – and it’s a surprisingly modern kind of revenge.

The spectre of death

Poe’s story illustrates its fictional plague in a couple of ways. First there’s the disease itself, which Poe calls the “Red Death”. When the prince locks himself away in the castle, this is what he’s hiding from.

When the plague later infiltrates the party, Poe describes it as a man. This unknown guest is dressed symbolically as the Red Death. His mask looks unnervingly like a plague victim’s corpse. Even his clothes are liberally sprinkled with blood.

The big reveal is that this is no man – it’s the plague itself. Hence when the prince drops dead, the guests discover the stranger doesn’t appear to exist at all.

In this sense, the story functions as an allegory. The plague infiltrates the castle in the same way that a gate-crashing guest might: it simply walks in.

There’s a broader truth to this, too. Because no one knew what caused cholera, it was spread by unknowingly infected persons carrying it into the home and places of work.

In fact, Poe’s story bears a great deal of resemblance to an earlier account of just this.

Journalist and poet Heinrich Heine described an outbreak of cholera in Paris in 1832. He writes of a lavish masked ball at which guests poked fun at the very idea of cholera. Then one of them unmasks to reveal: “a violet-blue face. It was soon discovered this was no joke.”

The guests flee to the hospital, where some died so quickly they were buried still wearing their fancy costumes.

What does the title mean?

For just six words, the title of Poe’s short story can be read in a multitude of ways.

A masque, or masquerade, is a costumed ball – exactly as Poe describes it. To masquerade is to perform a deception, to hide the truth about oneself or a situation. Less dramatically, masque is an alternative spelling for mask.

So the title can refer to:

Stephen King borrowed from and referenced some of these images in The Shining.

As for why Poe chose “Red Death”, it references the disease’s bloody symptoms. It also suggests the tragedy and terror of Black Death, the bubonic plague that killed some 25 million people in the 14th century.

What does the Red Death represent?

The fright of Poe’s story is endearingly simple. Like the teens in 2000 horror movie Final Destination, death stalks the deluded guests even as they lock themselves away.

The creeping spectre represents the fictional plague sweeping across the country, as well as the epidemics Poe and his readers witnessed first hand.

But at the same time, it’s a straightforward message about the inevitability of death.

In As You Like It, Shakespeare’s “All the world’s a stage” monologue says there are seven ages to life, from mewling baby to lover and finally death.

Prospero’s castle replicates this with its suite of seven rooms, each of a different colour and mood. The seventh room is sombre black and red. In other words, it’s a funeral parlour long before Death arrives.

The guests try to avoid this room in the same way that most of us put off thinking about old age and death until we have to. The revellers turn a blind eye to the disease outside the castle, too – yet death comes for them anyway.

Deep down, the guests know this is all inevitable. The chiming clock is a dread reminder that they have an allotted time on Earth. Each time it sounds, “the giddiest grew pale”. They laugh it off … only to feel disturbed once again when it next chimes.

The clock can’t be stopped from chiming the hour or reaching midnight. And neither can death.

Does the prince get what he deserves?

We can guess the prince’s fate long before the end of the story.

As a dark-hearted fairy tale, Poe’s tale mocks those who waste their lives with no thought of spiritual rewards and consequences. They think only of immediate satisfaction and care-free times. They’re shocked when death comes for them because they’ve invested nothing in the afterlife.

It also works as a parable about the divide between rich and poor, with the castle being an inverted / false paradise. The prince uses his wealth to escape from the disease beyond the castle walls, leaving the poor to die.

Our response to the Covid pandemic has been to lock down unnecessary movement. And what is the prince’s confinement if not a lockdown? Poe paints this as a ghastly, arrogant act, and yet it’s remarkably prescient of modern disease management.

However once locked in, the courtiers give themselves over to being merry:

In literature (and religious texts), excess and debauchery typically ushers in destruction. So it is for the greedy children in Charlie and the Chocolate Factory and so it is for Prospero and guests.

If Prospero is less a debauched monster and just a guy who wants to survive the plague, then the story is quite the tragedy.

And keep in mind the prince isn’t entirely monstrous: he saves a thousand (a thousand!) of his friends and courtiers.

The problem is, he only saves those who are of use to him. In inviting those “hale and light-hearted friends from among the knights and dames of his court” he’s summoning wealthy, well-bred people who can entertain him.

This is troubling given he’s, well, the prince, and therefore has a duty to his country and its population.

Prospero doesn’t strain himself to give comfort, safety or leadership to his people. This paints the folly of thinking and grieving in a starkly different way. Does the prince have the right to withdraw at all, let alone to make merry, without first thinking of his people?

Thus the story ends, not as a tragedy but a moral judgement. The prince shirks his duties – so is removed from them. Then, in the manner of Egyptian pharaohs in Bible stories, his entire household follows him into death:

“[O]ne by one dropped the revellers in the blood-bedewed halls of their revel, and died each in the despairing posture of his fall. And the life of the ebony clock went … [A]nd the flames of the tripods expired. And Darkness and Decay and the Red Death held illimitable dominion over all.”

Poe’s story relies on concepts of “in here” and “out there” to weave its dread, only to reverse the false security of such notions (see also The Witch).

The plague is out there. So is poverty. In here is gaiety and laughter and dancing.

In the end, this is another delusion. There are no lamps or lanterns in the castle – there’s only naked fire and flame (with its association with destruction and magic).

For all its coloured rooms and costumed tomfoolery, the darkness is already inside the castle: the lack of light, its ominous seventh room, and the revellers’ moral failings.

The savage irony of within / without boils to its inevitable conclusion. The guests have welded themselves into a fortress, not realising they’re constructing their own grave – a structure they’ll never leave.

Prospero and guests turn away from the outside world, yet are undone by the plague they carry within: self-interestedness, intellectual redundancy and amorality.

Six months into lockdown, the prince throws a lavish party of “unusual magnificence”. In literary terms, he may as well have served up cyanide.

Inception (2010) explained: back to reality