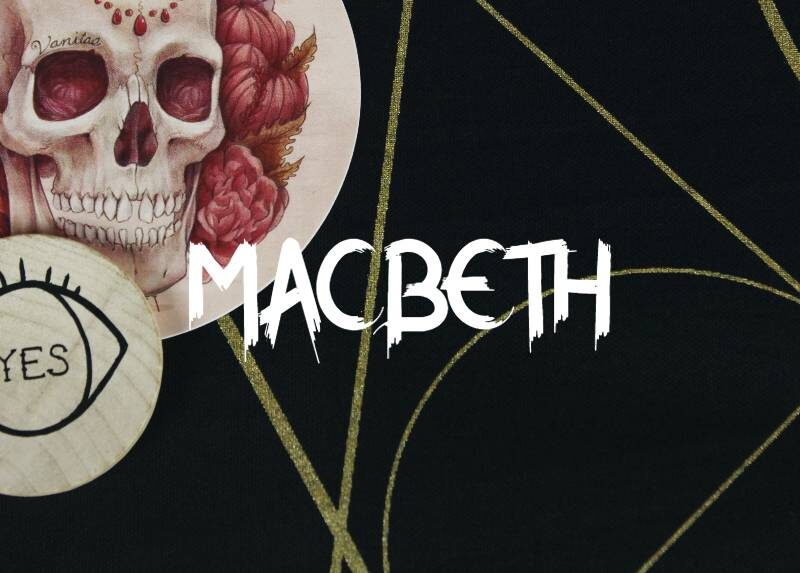 In 2002 horror movie remake The Ring an evil spirit torments anyone who watches a cursed video tape. Then, when others hear about the tape, or are duped into watching it, they too are haunted and killed.

What does this have to do with Macbeth? Well, despite a ‘release date’ 400 years earlier, Shakespeare’s play has a similar plot device. In fact, Macbeth has much in common with the horror genre.

This is a dark, violent story, with plot twists so devious that they still feel remarkably modern. It inspects the darker aspects of human nature, and even on paper, is cinematic in scope and style. Several modern films share similarities with the play’s devices:

Perhaps more than anything, Macbeth is a plague story with a difference. Here the source of contagion is whispers, rumours, spells and suggestions – and it’s deadly to those who hear their call.

This essay unpacks themes and interpretations of the written play (c.1606).

What happens in Macbeth?

Macbeth, a general in the King of Scotland’s army, is returning from battle. Along the way, he and fellow general Banquo meet three mysterious women.

These witches predict Macbeth (who already has the title of Thane of Glamis) will soon become Thane of Cawdor – and then King. As for Banquo, his descendants will be future kings of Scotland.

It’s little more than crazed whispering, but when King Duncan gives Macbeth the Cawdor title, the predictions become far more potent. Macbeth and his wife (Lady Macbeth) then kill Duncan to bring about the rest of the prophesy.

As King, Macbeth boils with blood lust. He plots to kill his enemies – who now include Banquo and the nobleman Macduff.

Paranoid about his shameful actions, Macbeth consults the witches again. They tell him he has nothing to fear until Great Birnam Wood walks, and that no man born of woman can kill him.

The predictions seem so unbelievable that Macbeth feels unbeatable. Yet as each falls into place they lock his destiny onto a dark path. And like his life until this point, the end is bloody and brutal.

The power of suggestion

When they meet on the heath, the witches greet Macbeth by three titles. He doesn’t know it yet but Duncan has already named him Thane of Cawdor, an honorary title. The witches’ greeting therefore represents his past (Thane of Glamis), present (Thane of Cawdor) and future (King).

They could be empty words – “full of sound and fury, signifying nothing,” as Macbeth later speculates. Yet here, at the start of the play, they have a curious effect on him.

Even just hearing the suggestion plants it in his mind. If we’re to believe his sense of wonderment, the witches’ greeting opens up a new world of possibility he’s never considered before.

Moments later when Macbeth learns he is Cawdor, his first reaction is to anticipate the crown itself:

“Two truths are told,
As happy prologues to the swelling act
Of the imperial theme.”

And in the very next scene, Macbeth plots to remove obstacles – Duncan and his heirs – from his new fate. “Stars, hide your fires; / Let not light see my black and deep desires”, he says. (1.4.57-58)

The prediction is a kind of weapon. Like repeating “Bloody Mary” or “Candyman” a set number of times, hearing the words is enough to unleash hell.

The witches plant the poison in Macbeth’s ear. He then infects Lady Macbeth. Reading his letter (1.5) is all it takes to open her mind to murder. “Hie thee hither,” she pleads, “That I may pour my spirits in thine ear.” (1.5.24-25) Of course Macbeth has already had these murderous thoughts poured in his ear. And they’ve taken root.

After they kill Duncan, Macduff ironically tries to shield Lady Macbeth from the horrific news. “’Tis not for you to hear what I can speak: / The repetition, in a woman’s ear, / Would murder as it fell.” (2.1.251-54)

But it’s too late. This is the very power of the words, like a spell. Macbeth and Lady Macbeth hear the witches’ predictions, and their thoughts immediately turn to murder. The repetition does indeed kill.

Even Banquo isn’t immune to this scheming. He’s given no great fortune of his own, yet his sons will be future kings.

In 3.1, he returns to the thought: “May they not be my oracles as well, / And set me up in hope?” To scheme against the king – the nation’s father – is a most devious, unnatural act. And yet, like Macbeth, Banquo can’t resist imagining what might be.

If Banquo had lived, would he also eventually have turned to murder to claim his fortune?

Suggestion is incredibly powerful in Macbeth’s world. When Malcolm and Donalbain flee to England, they spread rumours against Macbeth: “not confessing / Their cruel parricide, filling their hearers / With strange invention”. (3.1.34-36)

Eventually, these whispers are enough to turn the tide of favour against Macbeth.

At least six characters have a hand in Duncan’s death:

This ties in with a bigger question: is Macbeth a victim or a tyrant? Do the witches wreck his life for their own amusement, or do they merely reveal his true nature?

Shakespeare’s play suggests Macbeth’s fate is defined by female characters – an irony considering women weren’t even allowed to act at the time.

Moreover the witch hunts of this period saw hundreds of thousands of innocent women jailed or killed. This doesn’t exactly speak to feminine power. We’ll come back to that.

In the meantime, the play’s characters simply accept the witches have power over spirits and mortals.

The witches in Macbeth

The play opens with the witches planning to meet Macbeth. If we accept them as supernatural creatures (as audiences at the time would have), we immediately fear what lies in store for Macbeth. Thus Shakespeare sets him up as a pawn in their game.

And it’s no innocent game. In 1.3, one witch brags about terrorising a sailor, a scene that reveals the power they hold over men’s lives, and their cruelty. Later their leader Hecate confirms both of these: “all you have done / Hath been for a wayward son”. (3.5.10-11).

The witches use suggestion to plant the potential for murder in Macbeth’s mind. Having set him up, they later use the same means to destroy him. “Double, double toil and trouble”, they sing in 4.1, as they plot to double his misfortune. Just as with the earlier predictions, the witches tell Macbeth the truth, yet now use words designed to wrong-foot him.

Lady Macbeth talks a good game. Early in the play she claims to be almost super human (in the sense of Übermensch, free of morals – exactly as the killers in Rope do). There’s a meaty irony in this, and in the whole woman-blaming theme. Macbeth is a professional killer by trade, yet he quakes at the thought of killing one particular man. In fact, Shakespeare reinforces in many ways why this is such an unnatural act, and how it destroys the social contract and natural world.

So instead, it’s Lady Macbeth who becomes a warrior (in word, anyway) and coaches Macbeth to murder. She then chickens out, leaving him to bear the guilt. This is quite the double cross.

Whether Lady Macbeth kills Duncan in thought or deed, she pays the price. The contagion – the witches’ prediction – is fatal to those who hear it. It inspires Duncan’s murder. It leads to Macbeth’s death. And it contributes to Lady Macbeth’s suicide.

It’s not clear why Lady Macbeth has such a change of heart later in the play. Perhaps she merely rediscovers her conscience for dramatic purposes. It’s important that she gets her comeuppance. And, while she doesn’t have much role in the play beyond inciting murder, her death is part of Macbeth’s continuing journey.

Perhaps her prayer to the spirits in 1.5 (“stop up my blood”) is more potent than she realises – it opens the door to a haunting. Or perhaps she too, like the sailor’s wife, is the plaything of witchcraft.

The curse of Cawdor

The previous Thane of Cawdor was a traitor and manipulative schemer. He hoodwinks Duncan, and pays for his deception with his life.

Duncan calls Macbeth brave and noble. Yet by proclaiming “What he [Cawdor] hath lost noble Macbeth has won” (1.2.77) Duncan hands Macbeth the poisoned chalice. Macbeth’s prize is a fast track to destruction.

Poor Macbeth. Between women and curses, it seems he has little say in his own life. “This supernatural soliciting / Cannot be ill; cannot be good” he says in 1.3, not realising that this reflects his position – trapped in limbo.

And yet, Macbeth loves the idea of being king. To this end, he’s willing to profit from evil, yet wishes someone else would do the dirty work. Once king, his true face shows itself. It’s now a small step to order the deaths of women and children. He doesn’t truly have a regal nature, and clings to power like a coward.

The King’s the thing

Macbeth is a play about divine kingship, loyalty and witchcraft. Shakespeare wrote it for James I – a Scottish king, and a man obsessed with witchcraft (he even wrote a witch hunting manual).

Perhaps this is why the play doesn’t dispute the power of witches. It accepts their existence, and their appetite for evil.

Given this, it’s strange that Macbeth and Banquo are only a little startled to come face-to-face with real witches. They don’t attempt to catch them, or to look for them again later (although when Macbeth wants their advice, he’s able to find them quite readily). In reality, King James had many women tried and killed as witches – yet this play leaves them free to cause chaos whenever they want.

This is partly for dramatic purposes, and partly a result of Shakespeare’s royal flattery. Ultimately the play reflects the nature and needs of James I, and it does that in scope, content, themes and plot.

This is the cause and answer of many of the play’s implied questions. Why do the witches choose Macbeth? What makes Macbeth the brave warrior frightened of killing the king? Why are the play’s female characters vilified? Why does Macbeth’s success – as a husband and warrior – end in shame? Who, in the end, is responsible for Macbeth’s fate?