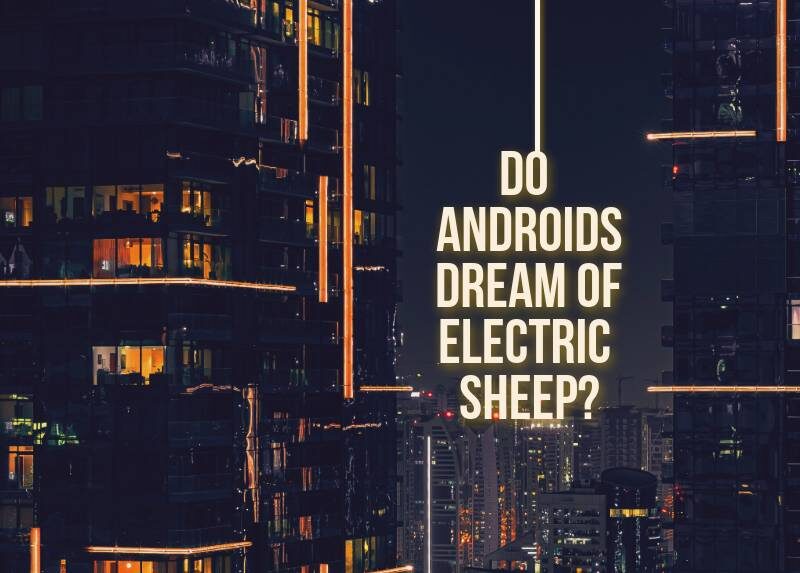 Rick Deckard, the protagonist of Dick’s 1968 novel, is a bounty hunter who destroys rogue androids (or replicants, as they’re known in the future).

When a group of Nexus-6 androids escapes from Mars and heads to Earth, Deckard must ‘retire’ them. But as the boundaries of real and fake collide, it’s hard to know which is which – and whether Deckard is on the right side.

What does it mean to be human?

It’s not just replicants that separate present-day Earth from the book’s vision of the future. In Do Androids Dream of Electric Sheep?, World War Terminus has destroyed the planet, veiling the Sun behind a blanket of radioactive dust.

Most birds and animals are long dead. Humans are dying out, too, though some are emigrating to Mars to escape the radiation. Those who stay behind risk turning into ‘chickenhead’ simpletons like John Isidore, with profound consequences:

“Once pegged as special, a citizen, even if accepting sterilization, dropped out of history. He ceased, in effect, to be part of mankind.”

Deckard faces this same threat. If the monthly tests reveal he’s sterile, he’ll be bumped down the hierarchy of humanity, just like Isidore.

This hierarchy is the book’s central tension: who counts as human? And, by extension, whose lives have value? For Isidore, even the nickname denotes his subhuman status as more beast than man (ironic given society’s new obsession with caring for animals).

The androids exacerbate this fraught situation. They’re built to be identical to us, just at the moment biological humans are in decline. No wonder their human masters fear they’ll become obsolete against such a superior species.

Meanwhile, androids – who live, breathe and think like people – yearn for the right to exist and be free.

Fearing androids are their better, more robust counterparts, human bounty hunters exterminate any they find on Earth. But replicants are virtually undetectable; some don’t even know they’re androids at all. So how to guarantee no humans are harmed along the way?

The Voigt-Kampff scale is the answer. The test looks for the presence of empathy, because: “Empathy, evidently, existed only within the human community.” The androids are nearly human but lack empathy: they don’t care what happens to others.

But therein lies a tangled ambiguity.

In this version of the future, most (possibly all) animals have died and been replaced by artificial replicas. Along with the tenets of a religion known as Mercerism, this means animals are now spiritually and commercially adored.

Thus to pass the Voigt-Kampff test, candidates must spot markers of animal exploitation in a series of questions, and then show appropriate shock, i.e., through blushing or pupil dilation.

Android Rachael Rosen struggles with this. She’s irritated by the sexual inappropriateness of one question, but overlooks the mention of a tiger skin rug. Her empathy is either too little, or too late.

There’s a parallel between this line of questioning and the Turing Test (see Terminator 2 and I, Robot). In some ways, the book is a series of dialogues that continually probes: Are you human? Or are you machine?

The problem is, not all humans can pass their own test of authenticity.

The fine line of belonging

Humans in this tomb-like world are lost, alone, and fast losing what sets them apart from their android servants. The species isn’t dead, but boy is it only just clinging on. And yet, like the kipple that creeps everywhere (i.e., entropy – see also Sunshine), death is inevitable.

The text initially paints Iran Deckard as a cold, bitter woman, more robot than loving wife, while the dubiously nubile Rachael Rosen – an android – has the sexual allure. Dubious because she’s just 18 and built more like a girl than a woman.

People are so cut off from the supposedly human quality of empathy that most of them use mood organs and empathy boxes to dial up their emotions instead. In other words, even the humans are playing at being human.

Iran is a cold woman of seemingly flattened affect (a sign of schizoid personality disorder). But so too are the androids; Dick repeatedly uses the adjective to describe the robots and their emotions.

The androids aren’t truly alive … but then, neither are the last humans. In which case, is there any meaningful difference between them?

“We’re all schizophrenic, with defective emotional lives – flattening of affect, it’s called. And we have group hallucinations.’”

Rather neatly, she describes the likes of Iran Deckard and humans who use empathy boxes. Interestingly, Deckard doesn’t quite fit into either group.

Fahrenheit 451 has a similar (male-led) view of sex in the future: marriage is another kind of tomb, and the wife equally deadened. The Stepford Wives goes one further in embracing woman as perpetual servant and sex toy, a trajectory that comes full circle in 2014 film Ex Machina.

Is Deckard an android?

Deckard is as human as it’s possible to be given there are no authentic human beings left on Earth. He’s an old-school man: while his wife clings to her empathy box, Deckard uses sex and violence to connect with humanity, then clings to the solace of opera.

It’s Rachael who voices our doubts. She asks whether Deckard has ever taken his own test, saying his memories may be false implants. In fact, Deckard passes the test yet, like Phil Resch, can turn off his empathy toward androids to kill them:

‘An android,’ he said, ‘doesn’t care what happens to another android. That’s one of the indications we look for.’ ‘Then,’ Miss Luft said, ‘you must be an android.’

Later, Deckard evades the murderous Roy Baty. “I wonder why they didn’t get me,” he wonders. ” Because I moved too fast, he decided.” Certainly, his super-heightened senses seem miraculous and convenient, all at once (and, if you consider Seth Brundle’s transformation in The Fly, a suggestion he’s not quite human)

Then there’s the shadow world, the android city that humans simply don’t see. This world mirrors Deckard’s to a T. For a while, his counterpart Phil Resch also appears to be android – suggesting Deckard will be, too. The twist is that Resch isn’t an android … yet his limited empathy shows he’s not far off it.

And just as the androids face endless testing, so too does Deckard. Rachael administers a test of her own – sex – then watches carefully for the shock response: “that expression on your face, that grief”.

All this is another way of saying that the tests, like human-android boundaries, are meaningless on Earth, where both species lack empathy and hope. Humans won’t accept people like Isidore are authentically alive, just as androids aren’t.

And yet, this raises the stakes of passing as human. Being classed as human is more important than being human; without it, there’s only death and isolation.

Do androids dream of electric sheep?

In the end Deckard seems most human when he’s beset by tragedy (which, like empathy, only exists in humans).

Deckard longs to own an animal. The narrative’s lack of children is telling; caring for animals appears to be a proxy. But with animals in such short supply, people are willing to get into debt to own one, and fake it with a replica in the meantime.

Ultimately, Deckard’s hopes are dashed. Rachael kills his goat just as tangles himself in debt to pay for it. The book ends with an unresolved question: do Deckard’s dreams of animal ownership prove he’s human?

Because androids lack empathy, they don’t care for animals; Pris even maims a spider for the fun of it. But whether Deckard’s need for a goat or a sheep or a toad comes from empathy or the need to pass as human is one more ambiguity.

This circles back to the question of the book’s title. The androids replicate humans [including our species’ limited empathy]. Therefore, do androids yearn in the same way that Deckard longs to own an authentic animal?

What the book articulates in response is the replicants’ need for parity. They begrudge their lack of empathy as a sense of incompleteness. And some of them try to balance the odds by revealing human empathy as a con. As Irmgard says: “without the Mercer experience we just have your word that you feel this empathy business, this shared, group thing”.

Do Androids Dream of Electric Sheep? came to the big screen as Blade Runner. That name doesn’t feature in the book, however. Vulture explains it came about from a conflation of several other stories.

The value of fake

This doesn’t mean fake has no value in the “tomb world” of the future.

Artificial animals soothe the pain of loneliness, giving people something to care for (an irony considering human warfare killed the animals in the first place).

When Pris pulls off the spider’s legs, Mercer calms Isidore by appearing to heal it again. Only later does Deckard realise the new spider is likely one more fake.

Mercer is Jesus-lite, offering easy-access TV religion without so many of the obligations. This, along with empathy boxes and mood regulators, replicates love, connection and caring because those things no longer exist as authentic states of being. No wonder the distinction between fake and real is so crucial for people left on Earth.

Androids, animals and Mercerism are all shades of the same thing. They ape human experience, standing in for all the things we’ve lost. But like the decaying human communities themselves they’re replicas – almost human … but not quite the real thing.

Do Androids Dream Of Electric Sheep? by Philip K. Dick (1968)

What to read and watch next

05/02/23: “There are no children in the book” now reads “The narrative’s lack of children is telling” – with thanks to the reader who asked about this. I’ll answer this in more detail in the newsletter.