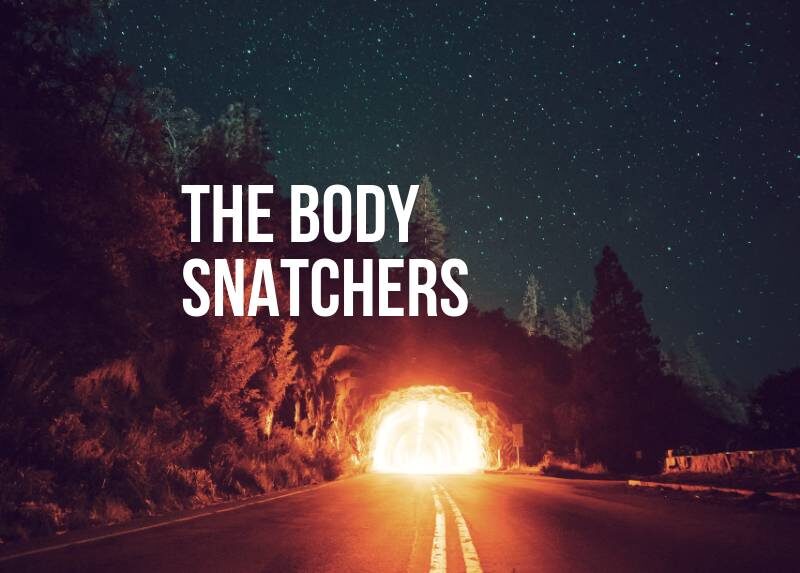 Published in 1955, Jack Finney’s novel The Body Snatchers captures a community – and country – gripped by fear and mistrust.

What is The Body Snatchers about?

When Becky Driscoll turns up at his surgery, Dr Miles Bennell is drawn into a bizarre mystery. Becky’s cousin Wilma says someone – or something – has taken over her uncle’s body.

Then Miles discovers patients all over California are saying similar things. It sounds like a mass delusion until Miles sees one of the ‘imposters’ for himself – a discovery that puts him in terrifying danger.

Paranoia in The Body Snatchers

What do we mean by paranoia? At the broadest level, we’re talking about delusion, typically underpinned by a sense of persecution. It can also be a deep sense of fear, particularly of the motivations of others. Either way, paranoia defines the spirit of Finney’s novel.

To be fair, protagonists Miles and Becky have much to be mistrustful about. Alien spores have drifted through the furthest reaches of space to land in Santa Mira. The spores then infiltrate and take over the bodies of local residents. (This kind of body swapping is also key to The Stepford Wives.)

Once Miles and Becky suspect what’s happening, they can trust no one. Their former family and friends are out to capture and clone them, too. In fact, the aliens plan to colonise and consume the entire country, then the world.

And yet, when the invasion begins, Miles tells the first witnesses that they’re delusional. He tells Wilma:

‘I don’t expect you to stop feeling emotionally that this isn’t your uncle. But I do want you to realize he’s your uncle, no matter what you feel, and that the trouble is inside you.’

The supporting cast of the story are doctors and psychiatrists – trusted professions. This comes to bite later on. Psychiatrist Mannie Kaufmann (or rather, his clone) says it’s Miles who is imagining things:

“You saw nothing, Miles … Except a rolled-up rug, maybe on a shelf in Becky’s basement. Or a pile of sheets or laundry; almost anything at all, or nothing at all, would do.”

This dance of suspicion, mistrust and paranoia is a main driver of terror in the book. But at a more intimate level, the characters are already paranoid even before the aliens arrive.

For example, Miles is in love with Becky, but thinks a relationship would only end in another divorce. He won’t even let himself acknowledge how he feels about her until it’s almost too late.

Until that point, Miles is a fatalist. It’s only by standing up to the aliens that he realises things aren’t always set in stone.

The Cold War and the threat of modernity

Finney’s book and the 1956 film adaptation, Invasion of the Body Snatchers, are often called political allegories. In fact, this isn’t always clear-cut. Either way, the book reflects the tensions of the time, especially Cold War paranoia.

For instance, fears about Communism are visible in Santa Mira’s slow commercial decay:

“‘You can’t get an order any more.’ The Salesman shrugged. ‘Not to amount to anything, anyway.'”

Moreover, the way the aliens pretend to be their hosts is exactly what we imagine spies do. And spies were a subject on everyone’s minds in 1950s America.

It’s also interesting that the alien invasion happens in Santa Mira, and not a bustling city. In Santa Mira, people know each other, and have grown up together. Finney’s tale takes place in an unspoilt, nostalgic location – that’s what give it its impact.

In this sense, it’s not Communism that’s a threat; it’s modernity itself. Regardless of aliens and outsiders, the small-town American life Finney describes was already changing. This is what Bennell means when he says:

“But now we have dial phones, marvellously efficient, saving you a full second or more every time you call, inhumanly perfect, and utterly brainless; and none of them will ever remember where the doctor is at night, when a child is sick and needs him. Sometimes I think we’re refining all humanity out of our lives.”

Of course, in a different way this is exactly what’s happening. The aliens seek to push ‘all humanity’ out of existence.

In The Day the Earth Stood Still (2008), US Secretary of Defense Regina Jackson (Kathy Bates) explains why we should fear alien contact. She says history shows civilisations are always destroyed by more advanced societies. Often it’s a fight for resources, sometimes just for kicks and bigotry.

What Jackon’s polemic overlooks is that – as far as we know – these are human traits. We wipe out other species and societies, or enslave them, or take their land and resources. The dominant culture then paints themselves as ‘the real victim’ or somehow at risk of annihilation: consider cowboy films or overblown fears of immigration.

Finney turns the spotlight onto this kind of doublethink. Still, it’s ambiguous whether his is an ironic or deliberate comment.

In Chapter 13, Miles recalls that a “middle-aged Negro had a shoeshine stand”. Billy supposedly loves cleaning shoes and playing up to white people. Then one day Miles witnesses the real Billy; a man filled with bitterness and anger at the role he’s trapped in.

Perhaps it’s easier for those who create or profit from inequality to believe the victims somehow ‘enjoy’ their slavery. It doesn’t take much empathy to realise that of course Billy would hate performing his blackness and poverty to his white masters.

Miles gains an insight into this this when he hears the aliens mocking him. He hears their real, unadorned opinions, the kind that can only said in private. Miles also recognises – fleetingly – that he shares a responsibility for Billy’s fate:

“I turned away and walked on, ashamed of him, of Billy, of myself, and of the whole human race.”

This is as far as Miles is willing to explore collective guilt. Still, the projection of that guilt is writ large in The Body Snatchers.

By casting the residents of Santa Mira as victims, Finney’s story is exactly the kind of social mythology that overlooks atrocity. It excuses it, then turns it into entertainment for people who have far less to fear in reality.

Read as an unmasking of our true nature, the novel ends with a chilling prediction. The aliens intend to suck the Earth dry to support their own species. Once the Earth is used up, the spores will move on to some other planet, and repeat the cycle:

“Parasites of the universe, and they’ll be the last and final survivors in it.”

Now, 60 years later, humans are only just beginning to face the consequences of this attitude to the Earth in themselves. At the same time, we hold onto the idea that our species will jettison this planet when the time is right, and find another world to destroy.

An introduction to Wide Sargasso Sea, by Jean Rhys