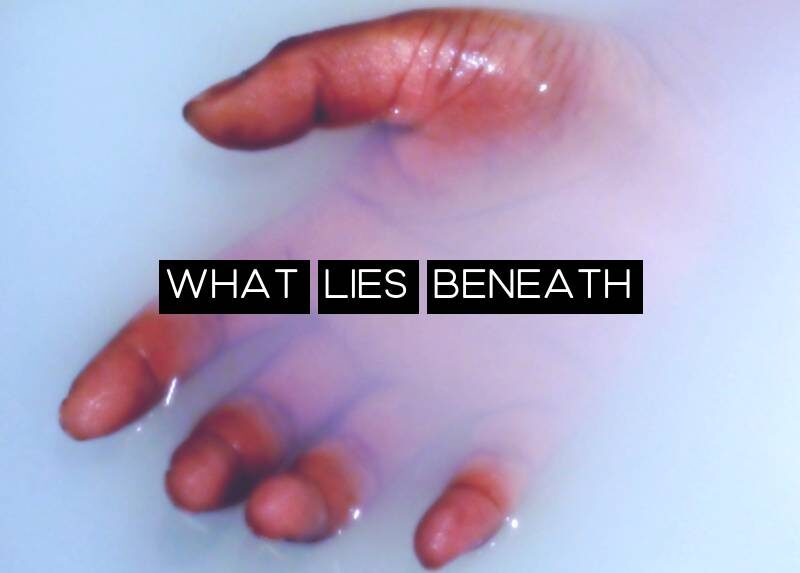 What Lies Beneath is a horror film with a big reveal – yet its characters and props telegraph the twist from the start.

Claire Spencer (Michelle Pfeiffer) thinks her beautiful lakeside home is haunted. Doors open and close by themselves, lights turn on and off, and a photograph repeatedly falls to the floor. Then there’s the ghostly message that appears on the bathroom mirror: “You know”. But is it a warning for Claire, husband Norman (Harrison Ford) – or the neighbour she suspects of foul play?

This article dives into What Lies Beneath, with red herrings, spoilers and gay abandon.

So, what really lies beneath?

Claire thinks surly next door neighbour Warren (James Remar) has killed his wife. While watching him with binoculars one dark, stormy night she’s startled to find him at the window gazing back at her. Then he vanishes from view – and muddy footprints lead towards her house …

Of course it’s a red herring – one lifted almost wholesale from Rear Window. In fact, this Hitchcock-like misdirection is key to a film where hidden knowledge continually threatens to burst into the light.

Mary Feur isn’t dead, and Warren isn’t out to silence Claire. Instead, the finale reveals Norman killed missing student Madison Frank to hide their affair, then submerged her body in a river near the Spencer’s home.

This is far from the only truth lurking below:

The return of the repressed

Claire’s identity is defined by her role to others. She’s mother to Caitlin and wife to an eminent scientist (Claire gave up her own career as a musician to be with Norman).

Then Caitlin leaves home and Claire begins to doubt her purpose and place in life. She joins a gardening group and fills her days with keeping house. The boredom – a rip in constructed identity – leads her to suburban clichés and voyeurism.

Rather than watching TV or reading romance novels, Claire watches the neighbours at love and war. She forges a new identity as detective, convincing herself Warren has killed his wife.

So far, so middle-aged angst. But is that all it is? Claire’s need for freedom and fulfilment wakes buried memories. The quietness of days becomes a vacuum that sucks the past into the present, back into the light (see also Ellen Brody in Jaws).

At first, this presents as a side-plot of a murdered wife – a ghost story goose chase that detracts from the real mischief. At the same time, however, it’s a huge clue about what’s going on right under our noses.

How the plot contains its own spoilers

Twenty years later, cinema is still struggling with meaningful diversity. It’s no great surprise that three female characters in a mainstream Hollywood movie of the early 2000s could all pass for each other: thin, blonde and Barbie-like (complete with dream home).

At one point, Claire even mistakes a ghostly reflection for neighbour Mary that turns out to be Madison.

Still, for What Lies Beneath, the similarity is significant. Claire’s resemblance and psychic connections to Madison and neighbour Mary foreshadow the story’s development.

Mary Feur is weepy and dramatic while Claire is refined and in control. In fact, what’s happening next door foreshadows Claire’s fate:

A similar mirroring happens with Madison:

Claire exhumes injustices done to Mary and Madison, bringing them into the light and freeing them from the darkness beneath.

Yet given Mary disappears once the misdirection is done, and Madison never exists except as a memory, in a sense there’s only really Claire and her three personalities.

So the fates of Claire, Mary and Madison mirror each other – but this isn’t the only signposting.

There’s the literal mirroring for starters. Jump scares happen in reflective surfaces, particularly in the haunted bathroom. And the house is stuffed with mirrors.

On one hand, this is a cue to the film’s main theme: appearances are deceiving.

Later, the mirrors offer Claire a way out when she grabs a shard of glass as a makeshift weapon against murderous Norman.

Speaking of Norman, the film shows us his cards in the first few minutes. The opening shot of the bathroom and Claire is filled with shades of white. Notably, Norman is in contrasting black – hinting at his opposition and darker identity.

Claire repeatedly appears in spotless white and pastel colours. But when she slips into Madison’s identity (or rather, subconscious memories of Madison) she wears vampish red … with a red apple, no less, signifying biblical temptation and fairy tale traps.

Red, white and black. It’s interesting how the film relies on the subtlest of coding. Yet more interesting is that we can intuit what these stand for without even realising we do. Or, as Madison might say: “You know …”

Is there really a ghost?

So the film has its ghostly goings on, a séance, a possession and an exorcism of sorts. But is there really a ghost?

Well, you could say the horror trappings are another red herring. The note in the bathroom mirror – “you know” – reads at first like a response to Claire’s question (“What do you want?”). But it’s Claire’s repressed memory calling out, a reminder that she knows what went down.

This fits with the ambiguity of the reflection in the bath water as Mary / Madison. It could be a ghost; it could also be a manifestation of Claire’s trauma, of repressed identities and memory resurfacing.

There’s another (accidental?) reflection in the “You know” bathroom scene – spot it at around the 01:18 mark.

True, this doesn’t explain the haunting: the computer turns itself on, a photo keeps sliding to the floor. Yet each of these also align with Claire’s repressed memories of a missing student.

This is particularly the case with the front door that keeps opening by itself. It’s almost muscle memory, a looped repetition of the day Claire saw Norman and Madison together (reflected in a mirror).

A car crash locks Claire’s memories behind amnesia and trauma until Caitlin leaves home. Then fears of an empty house, together with a scrapbook, brings them flooding back into consciousness.

What Lies Beneath owes half a debt to Hitchock. There’s the nod to Rear Window, an ambivalent marriage, and a wife who doubts her sanity.

Hubby Norman helps with the latter. He refuses to believe Claire, either about the neighbours or the haunting. Later he convinces her she’s going crazy and should see a psychiatrist: classic gaslighting.

Either way, Norman acts to protect himself, his work and his reputation. The terror he unleashes on women is born of privilege. He thinks time served – to his work, science and social standing – exempts him from the consequences of his actions.

He kills Madison because she threatens to tell the Dean, which would destroy his achievements. And he tries to kill Claire for the same reason.

Arguably, the film’s title is as much about Norman as the disappeared women: he hides his true self beneath the veneer of respectability.

Note that the way he kills women is an extension both of his privilege and his gaslighting. He uses muscle relaxant to stage manage their final moments, dictating both how they die and how others will interpret it.

Claire is one of the film’s disappeared women (see also Rebecca). She complains Norman doesn’t see her, making her one more ghostly presence in the house.

The tug of life and death resounds throughout the plot, echoes from the hereafter colliding with psychic connections. We’re led to believe Madison drives this story; her belongings are an irresistible siren song that inevitably draws Norman and Claire to the river.

The necklace is the last piece of this puzzle, seeming to summon Madison from her watery grave for a final revenge.

The film has come full circle by this point. It begins with Claire (or is it Madison?) underwater. It ends the same way, too.

Claire’s last act is to visit the graveyard – with a final subliminal flash of Madison’s face as the credits roll. Madison’s memory has been freed and laid to rest … but so too has Claire’s.

She’s been the perfect society wife: poised but hollow, defined by her relationships to others. Her push back against such an empty life is the final reversal: you can’t keep a wronged woman down forever.

What Lies Beneath (2000), directed by Robert Zemeckis