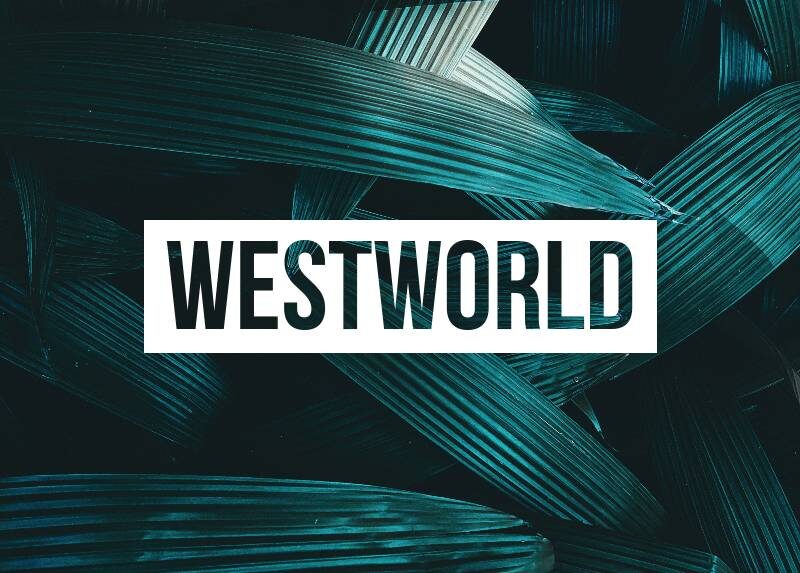 What is Westworld about?

John (James Brolin) and Peter (Richard Benjamin) are on their way to Delos, a high-tech fantasy amusement park. The resort’s immersive zones – Medieval World, Roman World and Westworld – recreate past times for paying guests at $1,000 a night. But when the park’s robot hosts malfunction, the tourists find themselves hunted by ruthlessly efficient killers.

Men are driven by sex and death – so sayeth Westworld. When the film’s male characters (there aren’t any female leads) go on holiday, it’s to do the stuff society frowns on back home. What happens in Delos, stays in Delos.

John and Peter head to Westworld to experience life in the manly, rugged wild west of the 1870s – grrrr. There, free of social expectations like marriage and duty, they can live purely for pleasure. And for them, pleasure means a grown-up version of the cowboy games they played as children.

For a thousand bucks a night they get to feel like heroes gunning down the bad guys. But there’s a grown-up twist, too. When they get shot, the bad guys really die – with blood and agony and everything.

Of course, the bad guys aren’t humans. They, along with the rest of the park’s staff (and its animals) are robots. This is the get-out clause, morally speaking.

Peter and John can experience what it feels like to kill without being guilty of murder. This is particularly ironic because – back in the real world – Peter is a lawyer.

The virtual reality of Westworld allows male visitors to live out a hyper-masculine fantasy. The theme park appears to address just two supposedly masculine desires – sex and aggression – as though no others exist.

What this means is that, by holidaying in Delos, guys like Peter and John don’t escape society. They’re plugged into a narrower, more intense version of it, along with its expectations about what ‘being a man’ involves.

In Delos, that means virility, aggression and heroism. Presumably back home they feel these things are lacking in their lives. But in Delos, they’re not optional.

When the robots malfunction, they don’t go haywire. They actually become more effective at following the script. In the same way that Peter and John must become hyper-masculine to fit in at Westworld, the robots become even better at the roles they’re given. So what does that mean?

Like everything else in Delos, the resort’s animals exist for the pleasure and fulfilment of paying guests.

For example, while there are snakes in this Garden of Eden, they don’t bite. The turning point comes when one of these supposedly harmless creates attacks John. It’s a warning that something is wrong in paradise – reality bites back.

In fact, when the snake malfunctions, it becomes a better snake. The malfunction disables the limits deliberately imposed by its coding. This means the snake can now do what it was designed (by Nature) to do: protect itself aggressively when threatened.

Similarly, the resort’s villains (Yul Brynner’s Gunslinger and Michael Mikler’s Black Knight) are programmed to be ‘like men’. When they malfunction, they too become even more effective at following their programming. In fitting with the Delos view of masculinity, they become ruthless killing machines.

In this sense, they are the conclusion of Peter and John’s fantasy of masculinity – all id and no moral control.

The film’s premise is that Westworld is somewhere men can go to break free of social bonds. But they’re no more free than the robots. Both are stuck with a predetermined script.

We don’t find out why the Westworld robots go bad. The malfunction is described in almost human terms, like a virus. One scientist even admits that they don’t fully understand how the robots work, because they’re designed by computers. He says they’re “almost as complicated as living organisms.”

When they malfunction, it almost sounds as though the androids ‘catch’ sentience. They become more ‘human-like’ (see also Terminator 2).

Consider the way Delos is set-up to cater to human desire. The scientists program the robots to have a weakness. Snakes can’t bite. The Black Knight has a blind spot. The sex models are programmed to never refuse guests.

In essence, the resort is a game park, where human visitors come to hunt for sport – it’s a Predator-style universe turned on its head. When the robots malfunction, however, things are reversed. Now they hunt the humans.

This idea that the robots are almost-human repeats throughout the film.

When John introduces Peter to Westworld, he tells him to watch the robots’ hands. This is the ‘tell’. The scientists are able to make robots indistinguishable from humans … except for the hands.

In fact, it’s not just the hands. The robots have human faces but, underneath the masks, they’re empty. There are circuit boards, but no kindness, love or moral compass. Again, this reflects the cynical masculinity at the heart of the film, and of Delos itself.

When they enter Westworld, the real world comprising Peter’s family failings is stowed for travel and forgotten about. In Delos there’s sex and death … and not a whole lot else.

The park’s advertisers sell this as the masculine dream, but in fact it reduces the men who visit to little more than robots, too. Beyond the fun and games, they too seem pretty vacant.

Like Jurassic Park, Westworld features a theme common to much of Michael Crichton’s work. Can we create sentient technology and expect to stay in control of it?

In Westworld the fantasy is built on unstable foundations and inevitably falls apart. The resort is an exclusive and exotic setting created so the wealthy can feel like gods (the same as Jurassic Park).

As the public service announcements reiterate, in Delos, you can’t die or be hurt. Moreover, there’s no consequence for damaging and destroying others. Dead robots are removed, reassembled and returned for the next day’s fresh start.

And yet none of this seems healthy. The hedonism, the shielding, the bogus fantasy – none of it is sustainable. Once the computer virus – AI sentience – takes hold, the illusion crumbles. Reality, once more, bites.

In Greek myth, the boy Icarus was gifted a pair of wings but flew too close to the sun. The wings melted, and he plunged to his death. This idea that humans are greedy for the attributes of divinity, with none of the grace, is not new. It always ends in disaster.

The film replicates something of this in a scene at the end of the film. John discovers the scientists are all dead: they suffocate for lack of something as basic as air. They’re surrounded by the most sophisticated equipment – yet can’t open the door to escape.

Is Westworld an allegory for class warfare?

The film (probably) isn’t a direct comment on class struggle. However, the story does touch on some relevant issues.

Delos is a remote paradise that exists only for the wealthy. By day, visitors can cause chaos, break out of jail, seduce the Queen, etc., and face none of the usual consequences. But when they malfunction, the robots – the workers – take over the factory, as it were.

Instead of existing purely for the benefit of a parasitic higher class, they regain some kind of agency – albeit warped. Consider the maid in Medieval World who finally is able to refuse the knight’s rapey seduction – but only because of a coding error.

Ultimately it’s not the robots that run amok in Delos, but consumerism. The film ends with realisation and remorse.

An exhausted Peter slumps on the steps in the medieval castle – seemingly the sole survivor of this destroyed world – while the words of the Delos advert play on a loop: “Boy, do we have the vacation for you.” What’s missing is consumerism’s inevitable small print: buyer, beware.