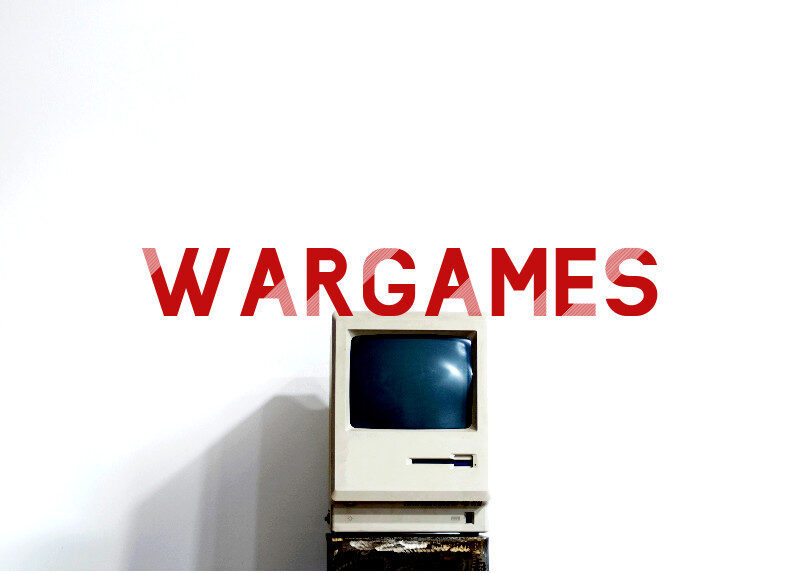 What’s the worst that can happen if computers control nuclear weapons? Teen action movie WarGames has a high school hacker find out.

What is WarGames about?

High school student David Lightman (Matthew Broderick) hacks a computer games company so he can play their unreleased titles. But when he starts a game of Global Thermonuclear War he doesn’t realise he’s playing it for real.

80s teen action movie WarGames marries the era’s obsession with video games with its fears of nuclear war. But the film is also right on the nail about the coming digital age, accurately predicting our relationship with computers and AI.

This article unpacks the themes and story-telling devices of 1980s classic movie WarGames – with spoilers.

Is WarGames an anti-war movie?

Who do you trust to manage a nuclear war – people or computer programs?

At the start of WarGames, two soldiers are ordered to launch a nuclear missile. One soldier hesitates because, naturally, you’d want to double-check before annihilating the planet. The other soldier (a very young Michael Madsen) demands at gun-point that they follow through with their orders.

For US army leaders, the close call is an excuse to delegate future missile launches to a computer (WOPR – The War Operation Plan Response). Humans are the weak link in responding to threats. Computers are faster and more stable, and therefore safer. Right?

The computer’s creator, Professor Falken (John Wood), designed WOPR – or Joshua, as he calls it – to learn from itself. Artificial Intelligence, in other words. But when Lightman kickstarts a countdown to nuclear war, no one can turn the game off.

Eventually, David and Falken realise they have to teach Joshua to understand futility. They fire up a game of Tic-Tac-Toe – the unwinnable game. Mere seconds from World War III Joshua learns the truth about nuclear war and stands down.

Ultimately, people can’t be trusted to manage nuclear weapons, but neither can computers. War – what is it good for? Absolutely nothing. This is the film’s underlying message: the question of who should manage nuclear war is bonkers, because such a war is a zero-sum game.

Instead of killing innocent people en masse, the film asks us to imagine a brighter alternative – a future shaped by idealistic young people interested in computers. Hmmm.

Side note: films about nuclear angst

WarGames is one of a whole batch of 80s films that touch on nuclear war, reflecting growing social unease about The Bomb at the time.

But long after The Day After, Threads and When the Wind Blows, films including Terminator 2, The Hunt for Red October and even Indiana Jones and the Kingdom of the Crystal Skull continue to explore the end of the world as we know it.

These movies made in, by and about the West imagine worst-case, what if scenarios: what would nuclear war be like? However, they typically overlook that we’ve already been there for real – when allied forces dropped atomic bombs on Japan in 1945.

How WarGames predicts the digital age

WarGames is a fascinating snapshot of Western popular culture and social ambition in the 80s, just as home computing was getting interesting but before it became ubiquitous.

First there’s the nod to computing as many kids would have experienced it: pay-to-play video games in arcades outside the home. But there’s something new on the horizon: the personal computer. Unlike video games, these were bulky, grown-up toys, typically used to increase efficiency in the office.

Of course, there’s a middle ground – gamers like David Lightman, who want to exploit both the gaming and efficiency aspects of home computing. This is precisely where we’ve ended up almost 40 years later, something Lightman’s character forecasts.

For example, he makes a bogus flight reservation via computer – at the time something only travel agents could do. Now anyone with a smartphone can do the same thing in minutes.

There isn’t yet a world wide web in the film’s universe (the internet appeared in 1983, the same year as the film). So, despite the cutting-edge computers and AI, David still has to rely on books and people – analogue sources – to plug the knowledge gaps.

Interestingly, David may go on to save the world, but as a computer nerd, he’s curiously amoral. He’s fine with stealing games, lying about his grades and spamming hundreds of phone numbers (without paying for the calls).

… and the geek shall inherit the world

David’s ambiguity is interesting in light of modern tensions with digital devices and tech companies. The internet has become a vital part of creativity, knowledge, income, justice and freedom. Yet access can be uneven, expensive, or exploitative.

We can book flights on our phones, but digital transactions are two-way and opaque: we don’t always know what personal information is being harvested, sold and misused in return.

To put it another way, David Lightman – looking suspiciously like a young Bill Gates – represents our attitudes to tech innovators. At first they’re scrawny and likeable upstarts putting one over on The Man. But we sense and are suspicious of the self-interest lurking beneath the surface, and the gap between what THEY know and what WE understand.

Perhaps most interesting of all is that Joshua’s inventor is NOT a trendy young geek. He’s a tired, cynical middle-aged man. And there’s a reason for that.

Who’s the enemy in WarGames?

The film’s binary opposites are a source of tension. But it’s also why parts of the movie get stretched a little thin.

For example, none of the folk who created and maintain Joshua can avert nuclear disaster. It falls to a high school kid to find a solution. This isn’t unusual in cinema, of course – see also Harry Potter defeating Voldemort.

Other characters are symbolic, sometimes veering into cliché. The cigar-smoking, Texas-cowboy general, for instance, who stands for tradition and the way things are usually done (by might, not reason).

David’s new-age masculinity – non-competitive, bookish and somewhat feminine – is in direct contrast to this. So is the peaceful, hopeful world view he shares with Jennifer (Ally Sheedy).

David accidentally threatens humanity with destruction, then saves the planet. The story paints this as David Vs the Computer, yet humans created both Joshua and nuclear weapons. As per The Day The Earth Stood Still, humans are the biggest threat to the planet.

Computers on the big screen

Recent films and serials don’t hold back on real-life programming and hacking techniques. Chances are that, even without coding knowledge, most viewers follow along just fine. Many will even know some coding themselves.

In WarGames, however, there’s no programming. Frankly, what would audiences have made of it, given so few even owned a personal computer at the time?

We’re told WOPR has played countless games of ‘nuclear war’. Yet it’s not until David teaches it to play Tic-Tac-Toe that it learns about futility.

And when it comes down to it, David and Falken don’t program Joshua to be better. They use a hack that lets Joshua teach itself.

This actually seems fitting, given WarGames gives Joshua a personality, making him a character in its own right. He has a voice, a human name, and desires (he wants to WIN). Rather than being a frightening, unthinking alien intelligence, he’s a growing, playful child – Falken’s dead child, in fact.

David, too, is likeable and non-threatening. He’s an early prototype of the on-screen computer hacker. Jump forward a couple of decades and Mr Robot, Die Hard 4.0 et al have expanded and exaggerated characteristics like social awkwardness and alienation. Now hackers are borderline dangerous loners but in the 80s, you could still grow up to be Ferris Bueller.

So You Want to be a Producer: a warts ‘n’ all Hollywood memoir