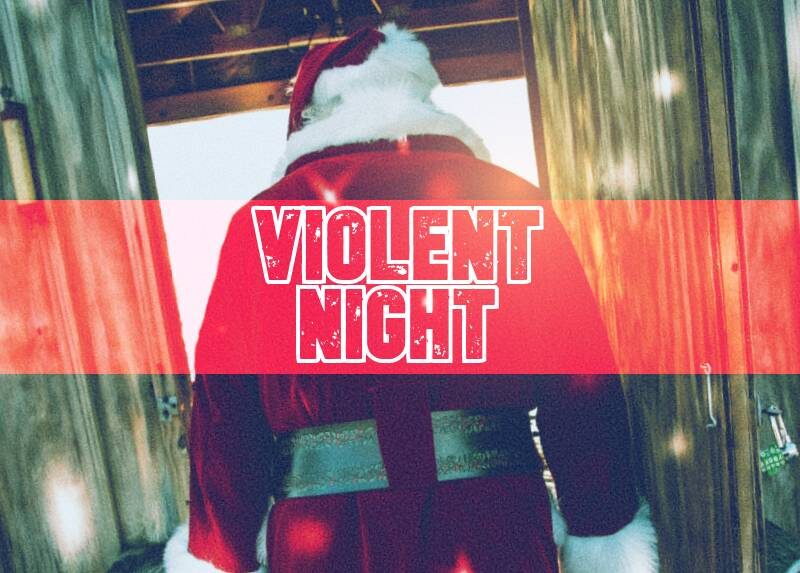 ‘Boxing’ day comes early in Tommy Wirkola’s merrily gratuitous Violent Night – but the film pulls its punches before the pay-off.

It’s Christmas Eve, and Santa Claus (David Harbour) is at the pub getting mortally wasted. Jaded by the season’s crass commercialisation and endless requests for video games, all Santa wants for Christmas is cookies and hard liquor.

For kids like Trudy Lightstone, though, nothing can take the shine off Christmas. Well, almost nothing: mom Linda and dad Jason are separated, but putting on a good face for the annual family gathering.

This would be a lot easier if the rest of the Lightstones weren’t completely hideous.

Grandma Gertrude (Beverly D’Angelo) swears like a sailor, but has millions stashed in the basement vault. Sister Edi will do anything to get her hands on the cash, aided by her binfluencer son and z-lister boyfriend. Meanwhile, Jason dreams of ditching his mother and getting his family back on track.

Sadly, no one’s getting what they want this year. The team Gertrude hires to cater the family gathering are actually violent criminals hell bent on pulling off a heist. But as leader “Scrooge” (John Leguizamo) fires the starting pistol, one guest slips in under the radar. It’s Santa Claus. And he’s pissed.

“Pissed” means drunk in the UK, and angry elsewhere. Either works for Violent Night’s non-traditional take on Father Christmas.

While we’re busy arguing over whether Die Hard is a Christmas movie, Violent Night’s mic drop is a strangely familiar story about a Christmas heist and a hero in a dirty vest (it’s Die Hard, folks).

So yep, there are punchy one-liners, and enough bloodshed to make John McClane look like John Lennon. Then, half-way through, Santa Claus turns into a Norse god. If nothing else, it’s incredible value for money.

When the plot finally delivers its real-deal booby traps and prat falls, it’s everything you could hope for and more. It’s just a shame we have to sit through the first two acts to get there.

Violent Night’s premise couldn’t be simpler: it’s Christmas, and Santa’s a bad ass. What it doesn’t need – yet has in spades – is lots of dialogue about broken childhoods and how the sun’ll come out tomorrow. Worse, these chats happen before, during and sometimes instead of the action.

The violence, while often dazzling and black-humoured, isn’t nearly as inventive as it could be. There’s a criminally wasted baby Jesus, for instance. Too many fight sequences also take place in the dark, or pan away too soon to stick the landing.

In the end, it’s hard not to remember we’ve seen this done before. That includes Shaun of the Dead for needle-drop fight scenes with zing, while Bullet Train set a high bar for hyper-violence in 2022. And yep, Die Hard.

Violent Night’s position in the film calendar feels fitting. It follows Bullet Train in the hyper-violence trend, but on a disarmingly oddball note. It’s also fever-dream disjointed enough to feel like a credible warm-up to 2023’s Cocaine Bear.

Does the film live up to its trailer? Well, it writes a couple of big cheques, but skips town before pay day. It delivers on gratuitous violence and enjoyably pantomime characters, yet at times it feels like watching an R-rated John Lewis Christmas ad.

The script is funniest when it goes wide-angle weird, but some ropy acting in tandem with annoying characters will have you wishing the guns would come earlier. Don’t hold your breath: this is one of those movies where everyone forgets guns can fire bullets when it helps the protagonist.

Essentially, Violent Night does to Father Christmas what Ted did for cuddly toys. The film’s running gag is the weirdness of having Santa Claus feed a bad guy to a lawn mower while screeching f-bombs. To be fair, there’s a lot of mileage in the gag; it’s just not a film with any one obvious audience.

After all, this is a film about Santa that kids can’t watch, but which still wants its older viewers to believe in fairies (just not the religious ones, ironically enough).

Bottom line? This stocking comes with a few holes, but if you’re a fan of twisted Christmas stories and gratuitous gore, Violent Night delivers. Merry Christmas, ya filthy animal.