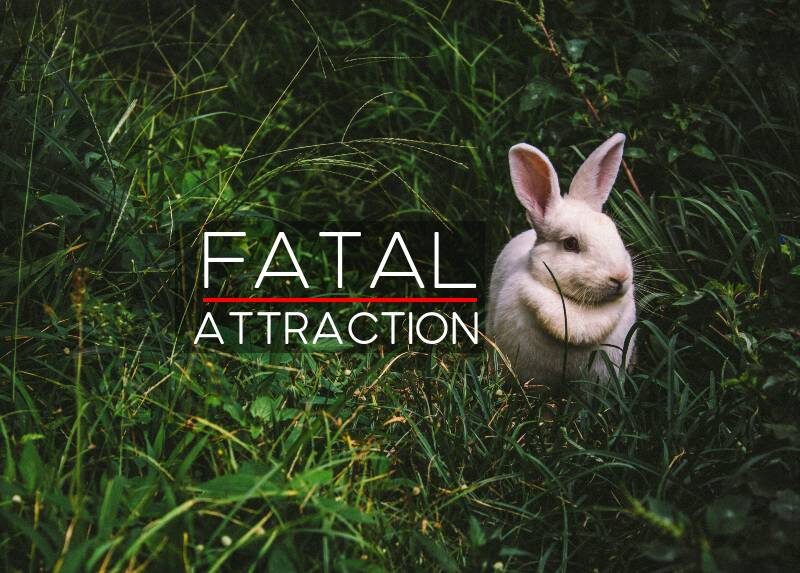 It may be famous for its bunny-boiling take on revenge, but Fatal Attraction (1987) is a clever spin on Puccini’s opera, Madam Butterfly.

What is Fatal Attraction about?

Dan Gallagher (Michael Douglas) is a happily married lawyer. Then he meets editor Alex Forrest (Glen Close). The two begin an affair while Dan’s wife (Anne Archer) and daughter are out of town. But when Dan tries to end things, Alex lurches from desperation to deadly violence.

Fatal Attraction is well acted, tightly scripted, and balances dramatic tension with social commentary. It may be famous for its shocking moments, but it says an awful lot in far more subtle ways.

Read on to discover the film’s key themes, and how it’s a retelling of Puccini’s opera, Madam Butterfly – with spoilers.

Dan Gallagher must choose one of two paths. There’s the family bliss and a quiet home in the countryside that he already has. Then there’s the crowded, cut-throat city, and the temptations of the flesh, i.e., Alex Forrest.

Dan doesn’t hesitate about jumping into an affair but comes to regret it. He discovers that all actions have consequences, and he must now live with his.

The film and its ending are controversial. They paint love-cheat Dan as the innocent party, and Alex as one more ‘mad woman in the attic’.

By killing Alex in the final scenes, Dan gets to shirk the greater consequences of his infidelity (compare also What Lies Beneath). He doesn’t have to play Dad to Alex’s child, and is even reunited with his family because of Alex’s actions (the film ends with a close shot of the Gallagher family photo).

The film is more than a morality play, because there are no clear cut villains and heroes. Yet viewed as a take on Madam Butterfly, the film isn’t a misogynistic attack on Alex Forrest, but a tragedy. While her actions aren’t excusable, her pain is understandable.

For most of history, men like Dan have done what they want – because they can. Alex Forrest’s character is a turning point. Like a modern fairytale, Fatal Attraction warns wayward men to think twice.

Madam Butterfly is Dan’s favourite opera, and is tied to his childhood memories of his father. Alex also loves the soundtrack, and plays it during dinner one evening.

But the opera connection goes further. Fatal Attraction borrows its plot, and revisits key themes, such as honour and loyalty.

What happens in Madam Butterfly?

In Puccini’s opera, Pinkerton, an American officer in Japan marries 15-year-old Cio-Cio. Not because he loves her, but because it’s convenient.

Pinkerton then leaves Japan for a few years. When he returns, Cio-Cio has had his child – and Pinkerton has remarried an American woman. Pinkerton agrees to raise the child with his new wife. Cio-Cio says goodbye to her son … and kills herself with a ceremonial knife.

The moral questions at the heart of the film are big, complex topics. It’s easy to give them black-and-white answers, but real choices always have more shades of meaning. This is something the film touches on in its repeated use of black and white imagery.

Starting and ending with characters in white, and battling for their souls in the bathroom, is a neat touch. It’s fitting for a film about morality. In other words, it’s possible to look innocent whilst having a flawed character. It’s also possible to have flaws and still not be entirely evil – and that’s human nature.

What we learn from the ‘bunny boiling’ scene

The film’s biggest impact in 1987 was its commentary on ‘the woman scorned’. Its warning wasn’t so much that married men should stay faithful, but rather that they might choose the wrong woman.

Such was the strength of this message that it gave rise to its own language: the phrase “bunny boiler” – a supposedly deranged woman.

The film is also interesting for showing the extra challenges of cheating in the analogue age.

When Alex phones Dan, it’s always on a shared line – at his office, or at home. Dan doesn’t have the personal space that comes with a smartphone. He can’t text or sext others in secret. Instead, he relies on his wife’s absence (and her trust) to get what he wants.

The scene involving Ellen’s pet rabbit has overtaken the film’s reputation. This is a shame, because it masks other more subtle techniques that appear throughout.

The bunny’s fate, for instance, is foreshadowed early in the film. When Dan and Alex start their affair in the kitchen, the camera cuts to a kettle boiling over. This represents their passion, but also nods to the pot boiling over in Beth’s kitchen later on.

Similarly, when Dan takes the rabbit home for the first time, we see him riding the lift back to his car, the cage by his feet. As the lift ascends, a red light on the wall casts a bloody glow over Dan … and the unfortunate bunny.

Early in his affair, Dan reveals that Madam Butterfly is his favourite opera. His father took him to see it as a 5-year-old, the only time Dan recalls him being nice.

It’s sad that Dan works so hard to not appear to be like his father – and yet isn’t so different.

While Dan showers Ellen with love, he also puts his own needs ahead of hers. He chooses to have an affair, even though it could destroy her happiness. In fact, Ellen is the innocent victim: Alex abducts her and tries to kill her mother. Alex also kills her pet rabbit.

This kind of battle between past and present occurs several times. One example of this is the film’s tension between city and countryside (another classic theme in art and literature).

Moving to the country represents moving up in life … and yet Dan can’t quite bring himself to do it. Perhaps the affair is his subconscious attempt to destroy himself – or to not grow up at all.

What to watch or read next