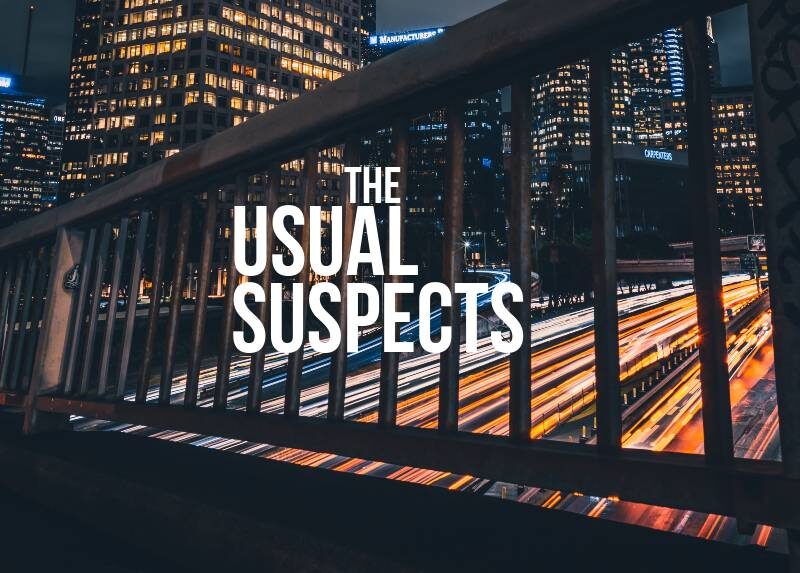 A police line-up leads a group of ex-cons to plan a heist. But if they’re the usual suspects, there’s nothing ordinary about the twist.

What is The Usual Suspects about?

When a dockside robbery goes wrong only gang member Verbal survives the ensuing bloodbath. Under interrogation, he reveals the strange coincidences that led to the heist, and the double crosses that stymied the getaway.

There’s a bigger prize, though. Verbal’s story appears to confirm the existence and true identity of a ruthless crime boss … if cop David Kujan can just get to the heart of it.

Verbal narrates almost the entire plot of The Usual Suspects – a fact that proves to be hugely significant. The story, told to Special Agent Kujan under interrogation, begins 6 weeks earlier.

After the robbery of a truck full of stolen guns, the police bring in five known offenders for a line up:

While each man claims he’s innocent of the truck heist, the line-up soon has them planning a job for real.

They target a taxi service run by corrupt cops to ferry criminals around the city. Motivated by revenge, this sees the guys re-use the famous line-up phrase (“give me the fucking money!”) for real.

After travelling to California to fence the stolen goods, the crew take another job that ends badly. This time, rather than jewels, they’re left holding a cache of drugs … and there are rumours drug lord Keyser Soze is involved.

Soze’s lawyer Kobayashi (Pete Postlethwaite) then pays them a visit. Each man has wronged Soze in the past; now they owe him.

The deal they can’t refuse involves stopping Soze’s competitors from completing a dockside drug deal. Doing so buys back their freedom – and a share of $91m.

Unfortunately, Verbal’s prediction of a suicide mission prove true. Keaton’s remaining crew are killed, and a terrified Verbal only escapes by hiding.

Kujan fills in the end of the story. There was no drugs deal: Soze set it up to kill an informant hiding on the boat. He then bumps off everyone onboard to cover his tracks.

The Usual Suspects uses a story-within-a-story mechanism: the police investigation and, inside that, the story Verbal tells. This means there are two conclusions – and two twists.

The first is that Keaton has completely misled nice-guy Verbal (and us, the audience). Forced to confront the betrayal, Verbal confesses Keaton was the gang’s leader. Then Kujan goes further to reveal Keaton is Keyser Soze.

This big reveal feels like the end of the film, but it’s only the end of Verbal’s narrative.

The second twist comes during the film’s closing scenes, when Verbal drops his act. There’s no limp or claw hand, and he’s not vulnerable, scared or stupid. Verbal is Keyser Soze.

When the crew first meet Kobayashi we learn that Hockney robbed the truck that led to the line-up (… but Verbal could have made this up).

Why do we believe Verbal?

Verbal is the outsider, both for the scale of his crimes and his disabilities (he has a pronounced limp and can’t use one hand).

Special Agent Kujon goes further in repeatedly calling him stupid, gullible and deformed, but Verbal is no accidental crew member. He’s the “man with the plan”.

This goes beyond a two-bit cop car heist, however. As the feared Keyser Soze, his real plan involves long-tail deception and murder. So what makes Verbal so convincing as his alter ego?

Well, most obviously there’s the way Verbal wears vulnerability as a costume:

Key to the last of these is “according to Verbal’s version of events”. Kujan learns too late that the story is a lie made of details hiding in plain sight; the whole thing is showboating.

In fact, the story is a construct designed to convince us Verbal is the underdog:

Keep in mind as well that Kujan’s cruel jibes also set-up Verbal as the underdog, because everyone hates bullies. “I’m smarter than you,” Kujan says, pretty much sealing his fate.

Neither Verbal nor the actor playing him have the physical conditions they portray, making The Usual Suspects one of several films that use temporary disability as a device. They’re at least partly questionable now for their lack of inclusion and treatment of disability.

The clues hiding in plain sight

All of these injustices and obstacles establish Verbal as the exact opposite of the real villain, Keyser Soze.

Verbal is non-threatening and (kinda) likeable; Soze killed his own family. In terms of credibility, this opposition is the biggest reason to trust Verbal, and why we assume he’s innocent.

But in film narrative terms, it’s the the biggest clue Verbal is Keyser Soze. Compare superheroes and the alter egos who are their opposites, such as Unbreakable’s David Dunn.

There are other clues of opposition. Verbal struggles to light his own cigarette in Rabin’s office and Kujan has to do it for him. This contrasts with the opening scene, when Keyser Soze lights-up from an elegant gold lighter. Later, when Verbal is released, the duty officer returns his possessions, which include “one lighter, gold”.

And when we hear the legend of Soze killing his family, he’s shown with exceptionally long, flowing hair, in contrast to close-cropped Verbal (along with the lack of limp).

How much is true?

Verbal is the [unreliable] narrator in The Usual Suspects. But as well as recounting how a botched heist came about, his role mirrors how we tell stories.

Like many storytellers, Verbal draws inspiration from things around him. He blends real people and details with fantasy:

Incidentally, Verbal’s name is a cute epithet for a man who supposedly doesn’t talk much, and certainly not to the police. It also nods at another phrase: verbal diarrhoea, when someone can’t shut up. Verbal certainly sings for the police … and it’s all bullshit.

Who is Verbal really?

Verbal describes Keyser Soze as the Devil. He’s so ruthless that he (supposedly) counters an attack on his family by killing them first. And such is his appetite for vengeance that other gangsters fear him as a bogeyman character (see also Candyman).

Moreover, Soze as the Devil is a master manipulator.

But note that the cops also hint at Verbal’s protector. Rabin says: “I’m telling you, this guy is protected from up on high by the Prince of Darkness.”

In fact, the non-existent figure both men are describing is Verbal.

Yet the real trick is convincing Kujan that Verbal exists. There is no Verbal, same as there’s no Redfoot or Kobayashi: it’s an alias, and all act.

The film’s title, The Usual Suspects, supposedly references a line in 1942’s Casablanca: “round up the usual suspects”. It also hints at a bigger plot device:

Verbal is right when he says Soze will only show up to get rid of him. When Soze appears, Verbal (his alter ego) disappears.

There’s no easy truth to Verbal’s story because much of it erases itself in the telling. However, what’s left suggests some possibilities.

Like The Departed, this is a story of rats and secret identities. Verbal even says, “I’m no rat” … while proceeding to rat on everybody and everything. Along the way, he also claims to reveals a number of double-crossers, both among cops and robbers.

The film has all the hallmarks of heist, but this is another sleight of hand (see also potential heist movie The Great Escape). There’s the introduction of men by their gang roles, and the flip from perfect plan to bungled consequences.

But really, the plot is a vehicle for settling scores, and it all leads to the removal of informer (i.e., rat) Arturro, Soze’s Argentinian competitors, and Keaton’s crew.

Kobayashi may be a fictional name for a real person, but presumably his part of the story is true: the gang ripped off Keyser Soze.

Each variously claims to be unfairly accused, victims of corruption, and the unwitting stooges to a master criminal. But they’re also rats, and they get their comeuppance. Maybe there was never any heist; there was only ever revenge.