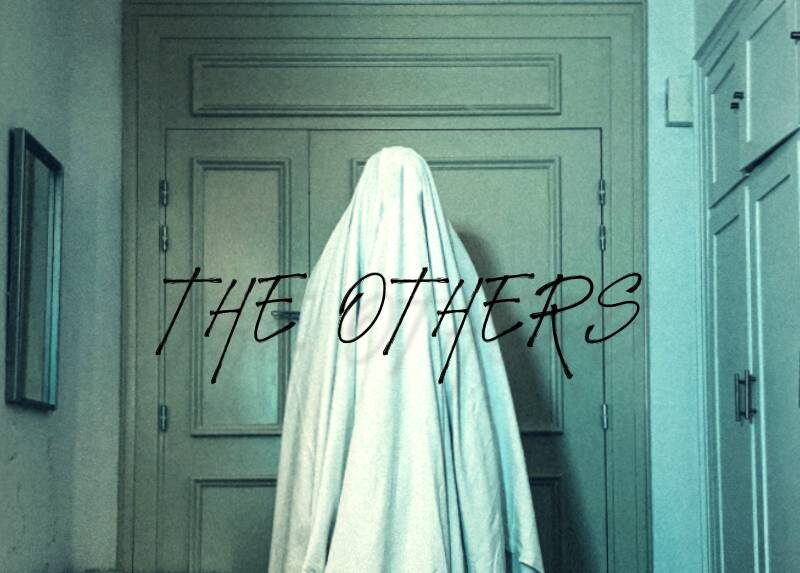 Exploring the inverted Gothic horror of The Others – and how the film telegraphs its twist from the very start.

When her husband never returns from the war, Grace (Nicole Kidman) is left to care for the children and their once-grand mansion. The children are photosensitive, so the family spend their days locked up and completely alone.

Then three strangers arrive claiming to be servants, an event that coincides with strange noises, unexplained events – and the feeling they’re not alone in the house after all.

This page explains story and storytelling in 2001’s The Others – spoilers ‘n’ all.

Some movies are so well known for their twists that the ending becomes common knowledge, a cultural currency that outpaces almost everything else about the film. That’s true of The Others as much as Sixth Sense; coincidentally, both share the same dramatic reveal.

The characters who tell this story are dead – they just don’t know it yet. And, for much of the film, neither do we.

… except we kinda do.

When Charles (Christopher Eccleston) doesn’t come back from the war, the grief is too much for Grace. She smothers their children with a pillow, then shoots herself.

But what should be the end of the story becomes the beginning. As in The Devil’s Advocate, the moment of death is a reset button. Instead of dying, Grace is still alive – and so are the children.

Catholic Grace thinks God has given her a second chance. So the family continue their strangely isolated life exactly as before – until the new servants arrive. Of course, they’re not servants at all but fellow dead souls come to break the news.

Oblivious, the family think their home is haunted by former residents. But they’re the ghosts, the spirits who won’t release the house they’re attached to.

Essentially, this story is inverted. The living family, the one whose story we usually hear, is pushed to the margins. Instead, we hear from the poltergeists – sad souls who’ve lost their way.

Keep in mind there are two twists to the film. The first is that Mrs Mills (Fionnula Flanagan) and co. are dead – but this red herring isn’t the full story. Mrs Mills, Mr Tuttle and Lydia are part of a framework that repeatedly misdirects us.

Gothic misdirection in The Others

The Others is a Gothic-inspired ghost story – a framework that blinds us to some fairly rampant clues throughout the film.

It takes place shortly after the second world war, which explains the deathly quiet and isolation: many people were evacuated or never returned from combat. As per the Gothic fictions of Poe et al, the family at the heart of the story come from old money and good breeding; they have servants and a sprawling estate.

Most of us don’t live like this, yet we buy into their plight as though it’s our own. How come? Well, the cues – the mist, large house, breeding, isolation and illness – tell us this family is in peril long before Anne (Alakina Mann) mentions ghosts.

You don’t need to recognise these as Gothic or horror cues to know what they mean; regardless, they brew an unmistakable atmosphere of dread. See also Rosemary’s Baby, an urban horror movie which, like The Others, draws us in by invoking our fears of being alone.

We’re also primed to champion the underdog in fiction – people who are disadvantaged or who have some unjust hurdle to overcome. It even works when characters are outrageously wealthy: Inheritance and The Game use dead fathers to similar effect.

Grace, struggling alone with young children and grief, deserves our sympathy – even after we discover her crime. Anne says Grace has mad fits (a very Gothic illness), while the children themselves – like tiny vampires – can’t bear sunlight.

In the end, though, we do do most of the heavy lifting ourselves. We assume the family are living, because that’s where most stories start. And, in looking for underdogs, we overlook the obvious.

After the film’s dramatic reveal, the plot rearranges itself right in front of us. In fact, the film sprinkles its hidden knowledge liberally across the story but, because of frameworks and assumptions, we don’t spot them.

Having hidden its surprise in plain view, the film distracts us with more of those horror cues.

The war-time setting, plus the children’s photosensitivity shrouds the house in almost perpetual darkness – always handy in a horror movie.

Mills, Tuttle and Lydia are servants, so are from a lower social class. They’re coarse in comparison to Grace’s refinement and poise. She and the children are young – Tuttle and Mills are old. The Nanny and The Witch uses these same oppositions to craft their horror, too.

As a result, we peg the servants as somehow frightening long before Anne finds their graves, masking the bigger truth.

Our fears of old age are enough to paint Mills and Tuttle (Eric Sykes) as ominous characters, even though Sykes is best known as a comedian.

In telling Nicholas scary stories, it’s the audience Anne is trying to spook. She runs the mechanism, explaining and drawing how ghosts look and act; she alone can see them at first.

The film then introduces yet more disturbing elements, such as the postmortem photo albums (which have historically been a real thing).

If we’re playing horror genre bingo, grief is the trump card. After all, horror is a means of inspecting our beliefs – and fears – about life after death.

When someone we love dies, sometimes part of us dies too – or so it can feel. Grace calls life after Charles the dark, a prison, and that’s what the house becomes – a physical manifestation of grief. Photosensitivity is merely the hook; the locked doors and darkened rooms mirror the madness of losing love.

Grace also takes on the deadening of her grief quite literally. She kills her children and then herself.

Later this grief extends to their home. “This house is ours,” they chant, reminiscent of the old man who declares “my house!” in The Conjuring 2.

This is the other sense of possession, incidentally: it’s not just about demons, but an act of ownership and the threat once more of loss.

Similarly, the house becomes a beacon for the dead – drawing to it those souls who wander.

This revelation brings the story back from its inverted position. Now we recognise the family for what they are: the tragic dead who don’t know they’re lost, and who won’t share their home with the living.

The film shows us this movement between inverted perception and [the film’s] reality through reflected surfaces. The house is filled with mirrors – a hint that we may not be seeing things exactly as they are.

And in the possession scene, when Anne appears to transform into an old woman, the scene flips repeatedly between hallucination and reality through mirror reflections.

The story’s twist is presented as buried knowledge that comes to light. There’s the photo hidden under the bed plus the graves – literally, the bodies buried under the garden.

The film begins and ends with a bedtime story, yet the two halves don’t quite meet.

In the opening credits, the story repeats Grace’s unshakeable beliefs (“There are things your mother doesn’t want to hear,” Mrs Mills says). But by the end, she has no certainty of anything any more.

Grace’s stories and home schooling also introduce a grim religiosity that’s of little comfort to Anne and Nicholas. In the end, the dark fairy tale of children’s limbo comes to define their fates.

Their joyless faith is part of their exceptionalism, however. It’s one more of many things that stand them apart from the rest of existence (and plays into Grace’s denial of being dead).

At first, ‘the others’ are the servants who vanished without a trace. When Grace and Charles talk of the futility of war, ‘the others’ means the outside world:

“Why did you go and fight that stupid war that had nothing to do with us? Why didn’t you stay like the others did?”

Eventually, the intruders are ‘the others’: the shadow family that will threaten to erase their existence (see also Us).

But of course, when the story turns right-way up, Grace and the children are the others. They’re the family we think stands for us in cinema’s eternal battle of good and evil; in the end, they’re the very thing we pity and fear.

The Others (2001), directed by Alejandro Amenábar