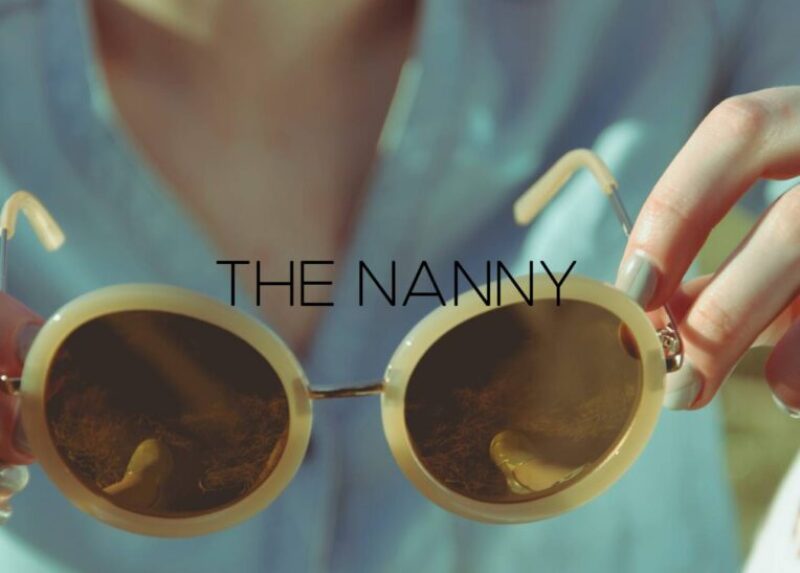 1965 horror film The Nanny stages a disturbing battle of the sexes to keep women in their place.

What is The Nanny about?

10-year-old Joey Fane has been in a psychiatric facility since the death of his baby sister two years earlier. When he finally returns home he seems scared of the long-standing nanny (Bette Davis). Joey claims ‘Nanny’ killed Susy – and now she’s trying to kill him, too …

This page examines the key themes and techniques in The Nanny – with spoilers.

The social background to The Nanny

The Fanes are a well-set, upper middle class family. Bill Fane is a Queen’s Messenger – a courier with diplomatic status. Virginia (Virgie) Fane is a stay-at-home mother. She has few domestic duties, because Nanny takes care of the household.

It’s telling that Nanny stays on with the Fanes even though there aren’t any children at home.

Mrs Fane is childlike and weepy, and still struggles with Susy’s death. Mr Fane is more like a headmaster than a husband, and has little time for her meltdowns. Nanny’s real job is looking after Mrs Fane.

This set-up – distant parents, a servant underclass – reflects attitudes of the time. This is an era when people ‘knew their place’. They followed the rules, and accepted the social hierarchy, even when it discriminated against them.

When we first meet the Fanes they’re preparing to bring Joey home from the institute. But, despite not having seen her son for two years, Virgie is distraught. She won’t go with Bill to collect Joey, sending Nanny in her place.

The film takes this idea of the nanny as a stand-in mother to its extremes. The adults take turns shirking their parental responsibilities, leaving Joey to fend for himself.

Creating the voice of authority

Because Joey is the film’s protagonist we see and interpret events through his eyes.

Joey is a well-spoken but spirited young boy. His age, mannerisms and social standing make his a compelling voice in the film.

Moreover, his time away from the family, as well as his fears about the ominously eyebrowed Nanny, make him an unlikely underdog. Having such regimented parents only compounds our sympathy for him.

On the whole, we accept Joey’s version of events. These are that:

Joey goes to impressive lengths to avoid Nanny. He demands she stays out of the bathroom while he’s bathing, and blocks his bedroom door so she can’t get in.

Joey’s predictions finally come true. First Nanny lets Virgie’s sister (Aunt Pen) die of a heart attack, then she tries to drown Joey. This seems like case-closed … but is it?

Much of what makes 10-year-old Joey the film’s voice of authority also works against Nanny.

She’s as an older, unattractive women, which plugs into social hang-ups about witches and unmarried women. The fact that she’s childless (or so we assume for most of the film) is another source of suspicion.

Audiences at the time would have understood that Nanny’s social position makes her ‘less than’ her employers. We’re primed to trust them over her. Meanwhile, the way she babies Mrs Fane often seems inappropriate and creepy (rather than caring).

We still embrace social attitudes like these. At her peak, Bette Davis was one of Hollywood’s legendary A-listers. But while male actors get roles well into their twilight years, there are fewer opportunities for older women. Davis’s later roles cast her as just that – an old woman, grotesque and horrific: see also Whatever Happened to Baby Jane?

We’re conditioned to mistrust Nanny because she doesn’t fit narrow gender concepts. She isn’t young, attractive or helpless … and that’s all it takes to make a cinema villain.

Could Nanny be innocent?

Eventually, Nanny is caught and put away for her crimes. Joey is reunited with his mother, and the bad feeling between them seems to vanish. Does this prove Nanny is a deranged murderer, or could there be a bigger crime under our noses?

Here’s another way to read the film’s plot points:

Joey isn’t a reliable narrator. It’s quite possible that, if he didn’t kill Susy himself, he at least shares some of the responsibility. At the very least, he hears Susy falling into the bath tub and chooses to ignore it.

Society says women should dote on their children, but Mrs Fane is frightened of Joey. She still struggles with the death of her other child, and is more concerned with her own emotions.

Likewise, Nanny’s true failure is also in motherhood. As her daughter tells her:

“You were too busy looking after other people’s children, weren’t you. You had no time for your own.”

Nanny has neglected her own (illegitimate – another crime!) child all these years. Her daughter resents her for this so much that she refuses to speak to Nanny while alive. She also refuses to mother an illegitimate child herself. She dies following a botched backstreet abortion (the procedure was only legalized in the UK in 1967).

Nanny’s punishment – for leaving the Fane children alone, for being a neglectful mother, for being of a lower social class, for being unattractive and unmarried – is to lose all her children.

When she returns from Amanda’s death bed, Susy has drowned. The trauma is so painful that the two events merge in a kind of psychological rupture.

Meanwhile, Nanny develops an unnatural maternal relationship to the Fanes. She babies Mrs Fane (feeding her, brushing her hair) and even thinks of it as her true responsibility in life.

In fact, it’s Mrs Fane’s needs that motivate Nanny. Nanny wants to silence Joey because one day, someone will believe his lies. Then Nanny will have to go, and no one will be left to look after Mrs Fane.

Together, the two women represent a fractured view of idealised motherhood. Mrs Fane is pretty and docile. Nanny dotes on the children. But as individual women, they are ineffectual and frightening.

The biggest sign that Joey’s persona may be an act lies in the film’s use of symbols.

Many scenes feature lights (or lamps) and mirror images. You might expect this, because the film is almost entirely set in the Fane’s apartment. They also represent clarity and plain sight, as well as the disorientation of mirrored images.

So, what is is that isn’t being seen, or is being mis-seen? Firstly, Joey’s innocence, and secondly, Nanny’s guilt.

A psychological reading: Sexual dominance and growing up

Another way of reading the film is through the psycho-sexual dynamic, and the Oedipal complex. This term, introduced by psychoanalyst Sigmund Freud in 1899, is controversial. At its simplest, it refers to:

“a boy, aged between 3 and 6, becoming unconsciously sexually attached to his mother, and hostile towards his father (who he views as a rival).”

This tension runs throughout The Nanny. And, as a story of latent sexual desire, other interpretations become possible:

Joey’s role in the household is as a miniature male guardian. He pulls the women into line (like father, like son) and controls their sexual tendencies or desire:

A coming of age

The Fanes, and their apartment, represents a dying era. They’re cold, regimented people who rely on class and gender to keep their place in the world.

Joey’s upstairs neighbour, 15-year-old Bobbie, stands for the liberated 60s. With her short hair and smoking, she represents the exciting world happening (literally) outside his window. She also represents the sexual desires that lie ahead; together they play-act a kind of adulthood.

This – and the decades to come – unravel much of what defines people like the Fanes. Women’s work slowly moves beyond the home, and becomes more valued.

Perhaps this makes Nanny’s fate even more poignant. After a lifetime of servitude and self-denial, her reward is to lose her final, surrogate child – Mrs Fane. The lesson is emphatic: know your place – and stay in lane.