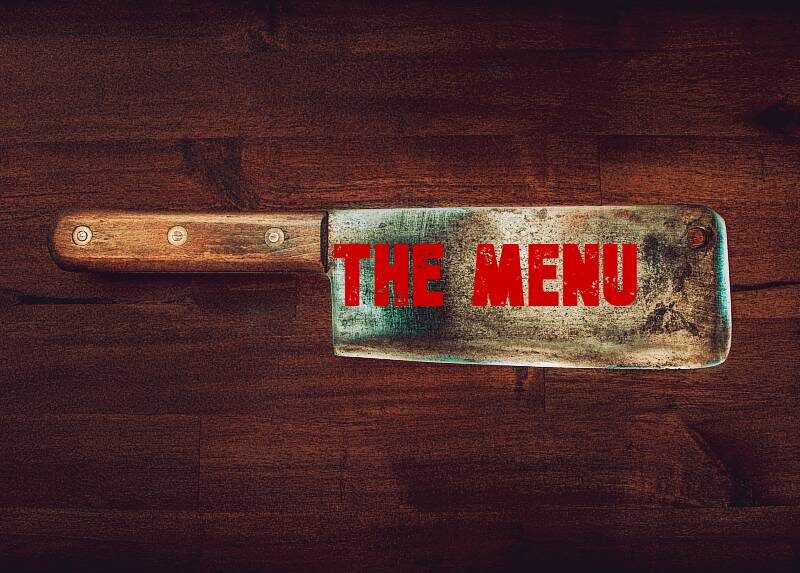 The Menu follows a trend of horror movies that peel back the facade to show us what bubbles beneath the surface. Pull up a chair.

When Margot (Anya Taylor-Joy) and Tyler (Nicholas Hoult) join an ultra exclusive dining experience, there are early signs it’s going to leave a bad taste in their mouths. Not only are their fellow gastronomes oddly unlikeable, but each has blown “twelve-fifty” for a seat at the table. That’s as in $1,250.

As the guests are dropped off at a remote island retreat, Margot casts a glance at the boat heading back to the mainland. The sense of foreboding is unmistakeable: Margot – you in danger, girl.

The diners are oblivious. They’re too busy gushing over the artisan curing shed and grabbing shots for the ‘gram. Sure, some things seem a little off – like how the restaurant’s staff all sleep on-site in army bunks – but maître d’ Elsa (Hong Chau) is on hand to handle awkward questions.

Everything is excusable, and a little bit thrilling, because this is Hawthorne, a restaurant fronted by kitchen guru Julian Slowik (Ralph Fiennes). Slowik and his staff push the boundaries of haute cuisine and taste; the kind of innovation that divides the punters and leaves critics breathless.

Sound familiar? Slowik could be almost any celebrity chef: creative and playful, but also often egotistical, obsessive and tyranniacl. When Slowik demands his guests don’t eat, it’s a play on words. Don’t eat, he tells them, but taste. Then he serves a bread platter that has no bread, and we start to wonder if maybe he’s not just a little bit precious.

At Hawthorne, concept eclipses mere nourishment. At first inventive and charming, the menu soon slides towards the absurd, the unsettling and the downright horrific.

Saucer of satire for table two

Satirical horror has been quietly doing interesting things in the last couple of decades.

Jordan Peele’s Get Out and Nope marry story and social introspection to wildly creative ends. Jennifer Kent’s The Babadook is a subtler and more mournful kind of horror story. American Psycho plumbs the depths in famously visceral style, while Mother! sacrifices sense for symbolism.

Mark Mylod’s The Menu largely steers clear of the genre’s pitfalls, serving up enough of a story to get your teeth into. At the same time, its nightmarish portrayal of modern culture is recognisable, relatable and funny.

So what’s on the skewer? Certainly at least on one level, our relationship with food as spectacle. Tyrannical chefs are applauded, or excused because they entertain us. Reality TV is more about personality than the pastry. And then there are the folk who experience their food through a screen, whether TV or TikTok.

Tyler embodies the latter, with his sneaky phone shots and adoration of everything Slowik says or does. Gushing, self-involved critic Lillian (Janet McTeer) and side-kick Ted (Paul Adelstein) are hilariously and recognisably pretentious about high-art food.

It would easy to assume this is a searing take on ‘eat the rich’, but The Menu isn’t (entirely) class specific. It’s a disdainful, distasteful look at conspicuous consumption, which is highly performative but often lacks emotional depth.

As per Westworld and the Jurassic Park franchise, the guests pay a heavy price for such vacuity. They think they’re here to consume, only to become part of the spectacle in ways they couldn’t possibly have imagined.

Not all of Mylod’s or Slowik’s courses are fully realised, and the ending could be meatier than it thinks it is. Still, there’s much to like about The Menu. Just not the food.