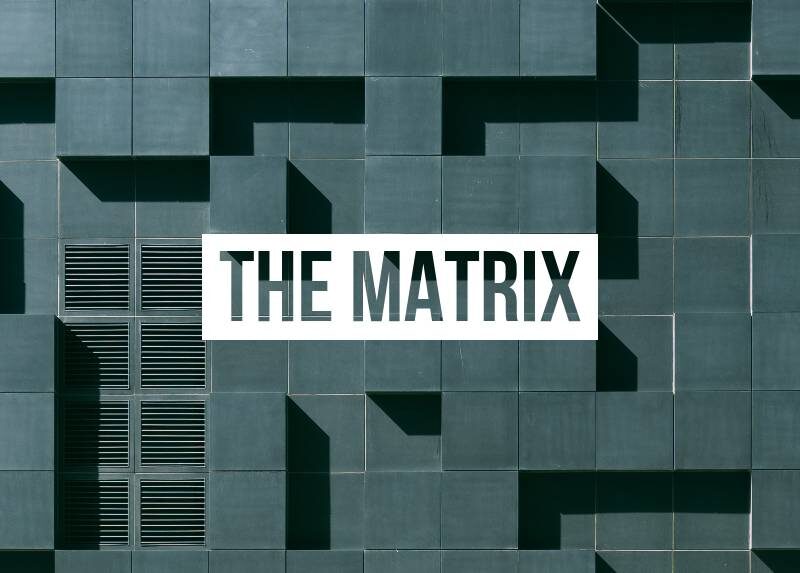 A computer hacker discovers reality is a computer simulation – i.e., ‘the matrix’. But is it all just a dream?

What is The Matrix about?

Software programmer Neo (Keanu Reeves) leads a double life as a computer hacker searching for greater meaning. When the leader of an underground rebel outfit offers him a taste of true reality he jumps at the chance, only to wake up to a nightmare. Human existence is a computer-generated illusion – and the machines are out to destroy us.

While most films reserve their twist for the end, The Matrix runs its big reveal early: what we think of as reality is a computer-generated lie.

Following a future war between us and the machines, humans only exist as batteries to power Artificial Intelligence (AI). The Matrix – fake reality – is an illusion designed to control human beings while they sleep through the truth.

In the film this substitute is a vast software program that humans interact with via in-game avatars. Meanwhile sentient bots – the agents – move in and out of the game at will, tweaking it to suit the machine’s purpose.

For humans who escape the game, however, the Matrix works more like a dream. And that immediately means things are far less reliable than they seem.

Neo thinks he’s waking up to a hidden truth about human existence; he even thinks this is an active choice (the red pill of reality or the blue pill of ignorance). But there’s a possibility he actually experiences a series of false awakenings and lucid dreams.

Is the Matrix a dream?

Neo’s story begins with him waking up to an instant message from Morpheus – the implication being that he may have dreamed Trinity’s rooftop chase. There’s no guarantee he isn’t still dreaming. Neo even answers his door and muses whether he’s awake at all.

We then see him wake up multiple times within the Matrix, including the day after following the white rabbit. Even the hackers fall asleep to play the game, gasping dramatically each time they wake up from it.

The repetition of dream tokens and deja vue within and outside the Matrix adds to this confusion between sleeping and waking states. For instance, the bug inside Neo looks very similar to the sentinels that attack the ship later on.

Like Alice in Wonderland, Neo follows a white rabbit to begin his adventure into the underworld. In the book by Lewis Carroll, Alice is another dreamer.

Morpheus references this when he first meets Neo: “I imagine that right now, you’re feeling a bit like Alice, tumbling down the rabbit hole?” Later he offers Neo the chance not to escape the Matrix but to go further into the dream:

“You take the red pill – you stay in Wonderland and I show you how deep the rabbit-hole goes.”

If Neo is dreaming about a fictional world called the Matrix, his struggle in it is about gaining control of the dream (see also Inception).

Like many lucid dreamers, Neo learns to do things his waking self is incapable of – like learning kung fu. He’s able to manifest his desires – immortality and true love – and, by the end of the movie, can fly (a very common lucid dream experience).

Morpheus asks Neo how he’ll tell reality apart from the dream world, but perhaps Neo repeatedly fails to do exactly this.

The Matrix as software

Computer games offer the experience, fantasy and special abilities of lucid dreaming while awake, so it’s no surprise the Matrix can be seen as either. And as AI-generated reality, the Matrix is clearly a bit of both.

Both the agents and the rebel crew tell Neo the Matrix is a sophisticated bit of software, though as game pieces they kinda have to say that.

As sentient bots the agents control the game’s variables and respawn at will. However, the hackers can similarly port in and out of the game and pick up expansion packs – the implication being they’re all sentient programs.

The backstory Morpheus gives Neo functions like the in-game explanation of non-player characters (compare Nigel Billingsley in the Jumanji reboot). He sets out the game’s rules and gives Neo his objectives.

Neo’s character arc also sees him become more like an agent than a free human. For instance, learning how to manipulate the Matrix, use bullet time, and respawn.

Agent Smith says humans are a plague that has destroyed reality through over-population and over-consumption. In fact agents, humans and hackers all share the attributes and actions of [computer] viruses that exploit or replicate everything they come into contact with.

The Matrix as all-enveloping game remains relevant to social media, gaming and the coming metaverse (1909’s The Machine Stops shows this isn’t a new fear). Instead of allowing digital interaction to become an all-consuming replacement for reality – something better than life – the question is whether to carry on playing or to wake up to reality, with all it’s imperfections.

The film’s main metaphor is about waking up to reality. For Neo, this means rejecting what he sees (realities created by state, corporate and capitalist machinery) and trusting in faith instead.

This is underlined by the sheer number of times Neo is asked to choose between two paths (see also The Devil’s Advocate). This happens repeatedly throughout the film :

The other characters face similar choices. In the past, each has had to decide whether or not to leave the Matrix. Later on Cypher (Joe Pantoliano) decides he wants to go back, essentially trading Neo for a steak.

Neo’s choices each appear to culminate in his awakening from the Matrix; in fact they lead to a different resolution. We already know there’s a prophesy which names him as The One; Neo’s real choice is whether or not to believe it.

This is similar to the choice David Dunn faces in Unbreakable. Both films are rooted in alternative superhero mythologies, where the hero must overcome self doubt before they can save the world. In that sense The Matrix is an origin story about how Neo gets his powers.

Morpheus explains how they each choose in-game avatars which reflect their self view and affiliations. Neo’s look changes as he comes to accept this for himself.

During their early training fight Morpheus and Neo are negative images: black and white, younger and older … even their outfits are reversed.

As Neo comes to believe the prophesy they switch places: his long coat and sunglasses at the end of the film is Morpheus’s outfit at the beginning. His position and powers overtake Morpheus as he comes to replace him.

In a way, Morpheus is Neo’s father: he brings him into the world. Lots of imagery backs this up, including the placenta-like pod Neo is trapped inside. Once he’s free of it his eyes hurt because, like a new-born baby, he’s never used them before.

Like many son-father pairings in fiction (and psychology), Neo becomes his father as a way of achieving adulthood. Or, if you like, Morpheus shows Neo how to grow up.

According to Agent Smith, the first version of the Matrix was a Garden of Eden that gave humans everything they desired without any of the harms. Unfortunately, it was too perfect for humans to comprehend so, as per the Bible story, their minds kept rejecting it.

Parallels with Christian stories go further – most obviously in Neo as the Jesus-figure who sacrifices his life to save humanity and is resurrected to continue the good fight.

The agents represent the authorities who want to destroy Zion (also a name for Jerusalem), while the ship’s crew are the disciples who either crave or doubt the existence of a Messiah. Cypher is the Judas betrayer: he and Neo even drink from the same cup.

But religious parallels go further than the Bible. The original Morpheus, the Greek god of sleep and dreams, lived in the underworld. This is also where the Nebuchadnezzar and Zion exist, deep beneath the Earth’s surface.

Morpheus claims to awaken dreamers to the real world, but much like the way he destroys his beliefs about the world, the red pill delivers Neo to existential and literal hell.

There’s a contrasting spiritual nod in Trinity. In Christianity, there are three parts – a trinity – to God: the father, son and holy ghost. Trinity likewise completes Neo: she believes in him until he believes in himself. Their love, union and belief is what defeats the agents (here and repeatedly in the franchise).

And of course, while Neo is The One in a messianic way, the more modern way we use the phrase is to signal romantic fulfilment, saying someone is ‘the one’. Neo and Trinity find The One in each other.

Ultimately, The Matrix mirrors medieval romance as much as it does dreams and software. Neo thinks his search is for meaning and Morpheus, but what he’s looking for all along is love – and that’s what really lies at the heart o’ the city.

Does cinema push positive male role models out of the picture?