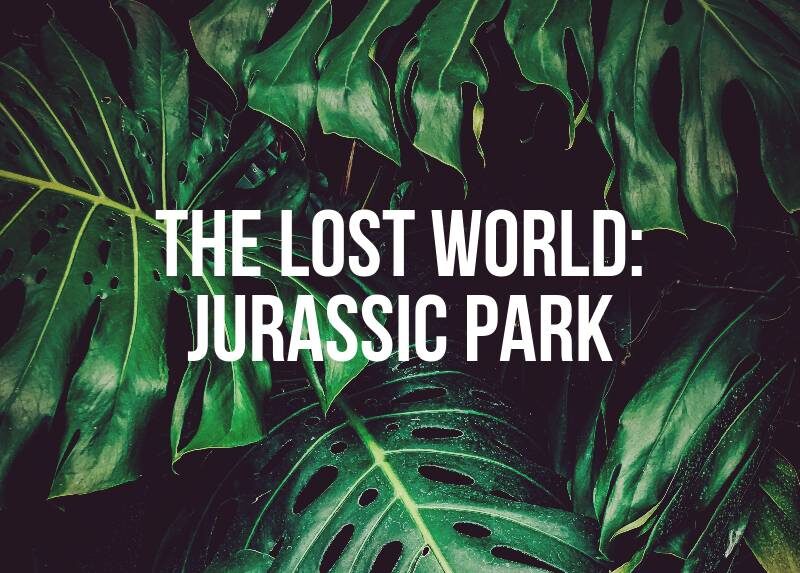 In which we ponder how Ian Malcolm is like a T-Rex, and why family is key to The Lost World: Jurassic Park.

When Dr Ian Malcolm (Jeff Goldblum) learns of a second dinosaur site near the original Jurassic Park, he wants nothing to do with it. Then he discovers palaeontologist girlfriend Sarah Harding (Julianne Moore) is already on Isla Sorna – Site B – and has no choice but return.

But what begins as a rescue mission quickly drifts into trouble, with a rival InGen team and Malcolm’s teenage daughter caught up in the chaos.

Return of the bad dad

If you embark on a creature feature franchise, do the animals inevitably become more like us – more human – over the course of the series? There are two ways this usually happens: you make the predators smarter, or you make them parents.

Having portrayed dinosaurs as frighteningly intelligent in the first Jurassic Park movie, The Lost World brings in the dads – twice over.

Ian Malcolm, the chaos theorist who was both irritant and hero in the earlier film, is back to save the day. And this time, he’s a dad. Of course, common to films of impending doom, he’s a flawed father (see also Greenland and Signs).

When teenage daughter Kelly (Vanessa Chester) tells Malcolm he likes having kids but not being a parent, she’s throwing one of his most famous lines in his face. Sure you can breed, but you never stopped to think if you should.

Malcolm cares about Kelly, but shows it in frustratingly academic ways. He tells her to clean her room but rarely talks to her – hence he doesn’t know she’s been cut from the gymnastics team.

Of course, the real reason he doesn’t know is a plot device. It introduces Kelly’s gym skills so she can high-kick a velociraptor in the face later on. Because otherwise it would be unbelievable …

Usually, flawed fathers are given a shot at redemption when their families face danger. That kind of happens here – though Malcolm arguably spends more time with girlfriend Sarah and a baby T-Rex than Kelly.

Incidentally, he also treats Sarah as a daughter extension: he prefers telling her what to do or rescuing her than listening to her. Hmm.

The Lost World establishes Malcolm as a father in search of forgiveness. What’s interesting is that his path to parenthood is mirrored by dinosaurs – a twist on the usual good guy, bad guy mirroring common to many film plots.

In other words, Malcolm’s failings as a father ground the T-Rex actions in behaviour we understand.

Absent father Malcolm forgets about his kid, both generally in life and when he doesn’t realise she’s stowed away in his trailer. In contrast, the T-Rex parents tirelessly follow their baby … er, also to Malcolm’s trailer.

While Malcolm leads the rescue mission, everyone else does the saving. Eddie saves Malcolm, Nick and Sarah. Nick and Sarah save Kelly. And Kelly does gymnastics to save herself – and her dad – from the Velociraptors. The T-Rex are far more involved in saving their kid – and then coming back for revenge.

And while Malcolm’s no helicopter parent, daddy T-Rex is committed to teaching its offspring to be top predator, i.e., by hunting Peter Ludlow.

So what we have is an interesting parallel parenthood. Moreover, it highlights the franchise’s key theme: respect for dinosaur life beyond human commercial interest.

In this respect, Sarah’s mission is the film’s mission:

“Robert Burke said that the T. Rex was a rogue who would abandon its young at the earliest opportunity. I know I can prove otherwise.”

Sarah’s prediction foreshadows the plot to come, with a male T-Rex dedicated to retrieving its infant, first from Malcolm’s trailer and later from his convertible.

Similarly, it’s no coincidence that InGen hunters bag a buck – not the mother – to bring back to San Diego.

One thing that The Lost World does well is its portrayal of badness as a complex – and sometimes cack-handed – thing.

Richard Hammond stands on the shoulders of giants to create the theme park that nearly kills his grandkids. You’d think that would stop him having another go … but no.

The contradiction of this is quite delicious. Hammond has blood on his hands yet looks like Santa Claus. He’s a squishy grandfather and big-hearted kid, but he can’t stop sacrificing innocent people to further his dreams.

Big-game hunter Roland (Pete Postlethwaite) is similarly bad but good. Bad because he’s an agent of environmental vandalism and refers to dead Eddie as a T-Rex snack. Good because he mourns his friend and orders: “no one tells the little girl”.

Ian Malcolm has a foot in this camp, too. He’s a so-so dad but he saves San Diego, the two kind of balancing out.

Similarly, the dinosaurs may be death machines but they only do what they’re hard-wired to do. And unlike Malcolm, Hammond, Ludlow et al, they have little choice in their actions … and no concept of morality.

Some characters aren’t conflicted at all – and the film telegraphs their traits in advance, activating our moral outrage. We’re not surprised these characters are bumped off so much as willing them to juicy comeuppance.

Hammond’s nephew Peter Ludlow is top of this list. As Hammond’s stand-in Ludlow gets the full force of the opprobrium due to the older man.

The film cues this up in a number of ways:

The plot then traps him at his own game. Ludlow is obsessed with catching a baby T-Rex but in San Diego, baby T-Rex catches you.

Usually announced by earth-trembling vibrations well before it arrives on screen, this final scene has T-Rex approach in near silence. It’s much the smarter strategy. You have to wonder at the effectiveness of a predator that warns its prey in advance.

Ludlow also has a double in sour-faced Dieter.

Dieter tasers a Procompsognathus for kicks. He’s a bully, and like Ludlow, incompetent (the dino raid on the InGen camp happens on his watch).

Dieter’s fate foreshadows Ludlow’s, playing it out in miniature – quite literally. He thinks he’s getting one over on the compys, only to end up on their menu. The tiny dinosaur has likely been trailing Dieter since getting tasered, adding extra gravy to his fate.

The plot makes liberal use of foreshadowing and repetition.

Kelly talks about being cut from the gymnastics team but later proves her worth on the parallel bars.

Nick and Sarah accidentally lure the T-Rex to the trailer when they rescue the baby dinosaur. Malcolm and Sarah use the same manoeuvre stateside to herd the T-Rex back to the boat.

There’s even subtle mirroring of island scenes with San Diego. Malcolm faces down Velociraptors at an abandoned gas station on Isla Sorna … and meets the T-Rex at a gas station in San Diego.

King Kong, and other movies

The Jurassic Park and Jurassic World movies are pretty self-referential. The same characters reappear throughout the franchise, as do iconic scenes. A T-Rex always roars at a park banner, for instance, and a vehicle always falls out of a tree.

The Lost World pays the franchise toll, though hat tips several other stories for good measure.

The ships that rams into the InGen harbour nods at Bram Stoker’s Dracula. In that novel a ship wrecked off the coast of Whitby in England has no living crew. Only the captain remains – dead but still lashed to the ship’s wheel.

The SS Venture is similarly a ghost ship, its crew in pieces and the captain’s dismembered hand still clinging to the wheel.

When a bus bursts into a Blockbuster video store, posters include King Lear with Arnold Schwarzenegger, Jack and the Beanstalks – starring Robin Williams – and Tom Hanks in Tsunami Sunrise.

Moments later a group of Japanese businessmen invoke the spirit of that other legendary dinosaur, Godzilla.

The most obvious parallel is with King Kong. If the Jurassic Park concept grew from the bones of 1933’s King Kong, the sequel brings it home.

Both films feature a remote jungle location, a mythic creature, and the desire to build the greatest show on Earth. Instead, each unleashes a giant beast onto an American city, causing carnage.

The difference lies in their endings. King Kong – an emblem of the era’s colonial and environmental thinking – dies in a hail of bullets. The T-Rex is allowed to return to its home (though only by a whisker).

It’s no surprise that The Lost World works so hard to magic up a kid for Ian Malcolm. Every film in the franchise puts a pseudo family in peril before reuniting them. This is why.

In Jurassic Park, the family unit is composed of Alan Grant, Ellie Satler and Hammond’s grandkids.

Jurassic Park III returns to the nuclear family, though even the Kirbys are divorced (another type of reunification story).

The Jurassic World part of the franchise makes family of Owen and Claire ‘plus kids’. By Dominion, the family unit – while not related – are living together. Again, they’re mirrored by a dinosaur family, though this time its velociraptors.

This latter proves the pattern of anthropomorphism (i.e., interpreting or attributing non-human behaviour in human terms). The velociraptors are the smartest of the bunch, working in packs to outsmart people. By Dominion, they’re one step removed from pets.

As for The Lost World’s colour-blind casting, it feels pretty forward thinking for 1997 – but hints at the limitations of the franchise.

To date, Kelly remains the only non-white character to appear in the core family unit. This is particularly significant given these families are fabrications, composed of unrelated characters for the purpose of telling stories we care about.