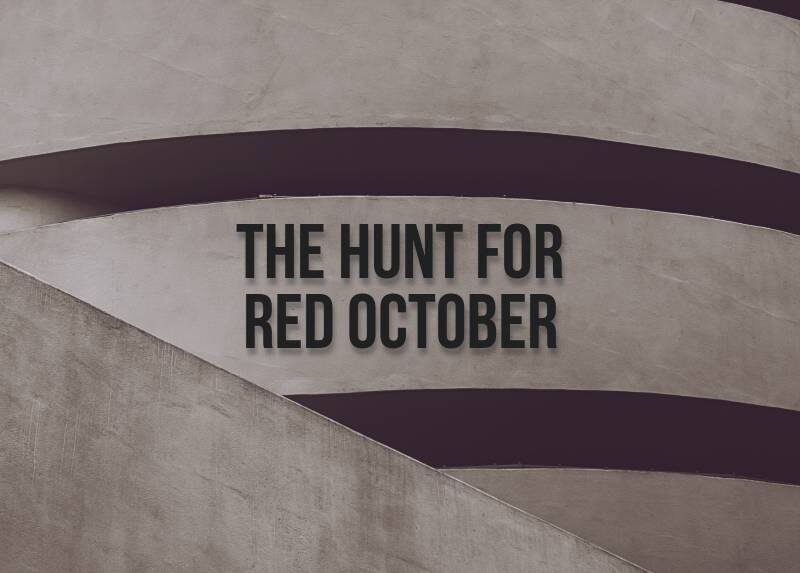 Unwrapping language and storytelling in The Hunt for Red October to explore why – more than 30 years later – this submarine spy thriller remains relevant.

What is The Hunt for Red October about?

When the American intelligence service discovers a new class of submarine in the Russian fleet, it reignites Cold War fears of Soviet subterfuge.

Capable of silent propulsion, Red October can reach the US – and launch missiles – without detection. But as both countries race to neuter the threat, CIA analyst Jack Ryan (Alec Baldwin) suspects the rogue Russian captain (Sean Connery) isn’t all he seems.

This article explores storytelling structures in 1990 film The Hunt for Red October (based on Tom Clancy’s 1984 debut novel). There are spoilers ahead but stick around – this story speaks to issues that have since come around again.

The Hunt for Red October is set in 1984, the same year Clancy’s source novel was published. So it’s both about and a product of the Cold War, a prolonged period of animosity between the US and the Soviet Union after WWII.

John McTiernan’s film adaptation followed in 1990, at the tail end of a stand-off that often threatened to erupt into nuclear war.

At the time, fiction was an outlet for Western collective angst, such as 1986 animated movie When the Wind Blows and its depiction of life after The Bomb. In a similar vein, The Day After (1983) remains one of America’s most watched TV broadcasts. And in the UK, few who saw 1984’s Threads forgot it in a hurry.

All this grounds The Hunt for Red October in the West’s long-time unease about the Soviet Union.

Russia was often Hollywood’s go-to enemy from the 1950s until the end of the Soviet Union, when the spectre of communism was overwritten by fears and fetishisation of the Middle East.

Unlike the more recent ‘war against terror’, however, by the end of 80s Hollywood was ready to explore what collaboration might look like.

1988’s Red Heat found commonality between cops Jim Belushi and Arnold Schwarzenegger. The Hunt for Red October finds it in an unlikely partnership between a CIA analyst and a Russian captain.

Two tribes. Or are they?

The film’s opening scenes convey everything we need to know about Cold War tensions. There are two sides – Russia and the US – and neither knows what the other is up to (except they do, because everyone’s watching everyone else).

So how does the film differentiate the two tribes?

Initially there are lots of Russian stock images: big uniforms, the language, and rousing, military music. At one point, the crew even burst into singing the national anthem … as you do.

Similarly, we can spot the Americans because of language and accent. But we also intuit it because the Americans are more ethnically diverse: several key characters are Black, unlike the homogenous Russian crews.

What other subconscious cues are there? Well, Ryan is a family man with a young daughter, which humanises him as a sympathetic or noble character. More significantly, he makes her a promise. The film ends with him making good on this because, as regular readers know, most stories are about family.

In contrast, the Russians are merciless towards their own kind (even Ramius kills his own political officer). And the government is ready to sink Red October or, better yet, trick the Americans into doing it.

There’s a twist, though. Ramius doesn’t want to destroy America, he wants to defect. This is matched by his becoming more American – and more like Ryan – over the course of the movie:

The film may look beyond differences of national identity but do to so, it filters characters through their proximity to American ideals.

Ramius, as we’ve seen above, is the ‘acceptable’ kind of Russian (later he’s literally accepted into America).

Captain Tupolev (Stellan Skarsgård) is the unacceptable kind because he’s willing to sacrifice his compatriots. The plot rewards him with destruction … by his own missile, no less.

Assistant cook Loginov is also in the unacceptable camp. He’s the double agent on the Red October, the ‘true’ Russian who tries to sabotage the submarine and launch its missiles.

Incidentally, there’s a fleeting shot of Loginov at the start of the film: he’s in the background when Ramius bumps off political officer Ivan Putin.

His lurking turns out to be significant, not just for the twist but because it reinforces Ramius as worthy of America.

The Hunt for Red October is about the identities we assume (national characteristics, even racist clichés), and those that lurk beneath.

Ramius and co hide their true intentions from their fleet. Loginov hides his true allegiance from Ramius. The Russian and American ambassadors use double speak to hide what each knows about the affair. Even the film claims to be a hidden history.

Yet there’s another kind of hidden identity. When Ryan steps into his role as action hero, he displays qualities he didn’t know he had.

This innate expertise is almost always masculine. Consider the nobody / Everyman who turns into a hero in times of stress, such as The Fugitive’s Richard Kimble.

Male protagonists often step up to seemingly impossible situations, yet are always capable of doing so – no matter how specialist the situation. The message seems to be that heroism is a (male) personality trait just waiting to be revealed.

Ryan isn’t a submariner – he’s not even a CIA field agent – yet he’s able to pilot the Red October at a critical moment (albeit with guidance from Ramius).

He claims to be unnerved by firing bullets in a missile silo but nonetheless defeats the cook. And he hates flying yet flies everywhere, jettisons into the sea and, finally, sleeps like a baby on the flight home … despite his fear of turbulence.

Ryan’s learned expertise gives him an advantage over arrogant military leaders. Yet his superpower isn’t book smarts, but empathy and gut instinct. It can’t be taught, stolen or superseded as a result.

Intelligence gives him a connection to the Russian captain, but instinct tells him when to take action … just like Ramius when evading missiles.

Ryan and Ramius: the names are similar enough to suggest these characters mirror (or mimic) each other. Here, though, the men aren’t mirror images so much as kindred souls.

Ryan knows Ramius so well he can predict his actions; that’s how he suspects the captain intends to defect in the first place.

You could say Ryan and Ramius speak the same language. Actually, they do so literally: each man learns the language of his enemy in order to understand him.

By the final showdown, however, Ramius switches to English for ease of communication [and cinema]. But it’s also a subtle cue that he’s working with the Americans now.

This isn’t the film’s only instance of shared language. Ryan sends Morse code messages to Ramius via Captain Mancuso (Scott Glenn). Ramius receives these through the periscope and has his men respond likewise in code – that is, sonar pings.

Side note: Making the enemy

For all the similarities between characters like Ryan and Ramius, if anything, Hollywood has constructed the idea of America and Russia as negative images of each other … and yet they’re often remarkably similar.

“The United States, forged out of mass immigration, has always defined its sense of self or that ‘imagined community’ though its sense of ‘the other’. […] America’s enemies defined who America was”

Certainly, this ambiguous sense of us and them is present in lots of mainstream movies. The Hunt for Red October contains both positions: the enemy is ‘same but different’.

If the set-up shows how similar Ramius and Ryan are, it’s underlined at the end of the film, when both men share identical stories of learning to fish.

This is also when Ramius is revealed as a true American, if you like: he defects because he won’t help his country fight a senseless war. This is his revolutionary act, one that completes the significance of the submarine’s name: ‘Red October’ echoes Russia’s 1917 Bolshevik Revolution.

In the end, Ryan and Ramius are able to look past their differences and nationalist agenda to find common ground.

Ultimately, the sea is their common language and love, whether shared via sonar pings, memories of fishing, or the lure of open water.

This also resolves the film’s language trick, when the characters switch from speaking Russian to us hearing them in English. The seamless transition at the start of the film hints at a deeper truth that returns in the closing scenes.

The Hunt for Red October repeatedly reveals that, beneath the differences of identity – a costume we can put on and take off – we’re the same. Perhaps that’s something worth remembering every now and then.

The Hunt for Red October (1990), directed by John McTiernan

The Menu (2022): taking a bite out of entertainment culture | Review

All Quiet on the Western Front, by Erich Maria Remarque