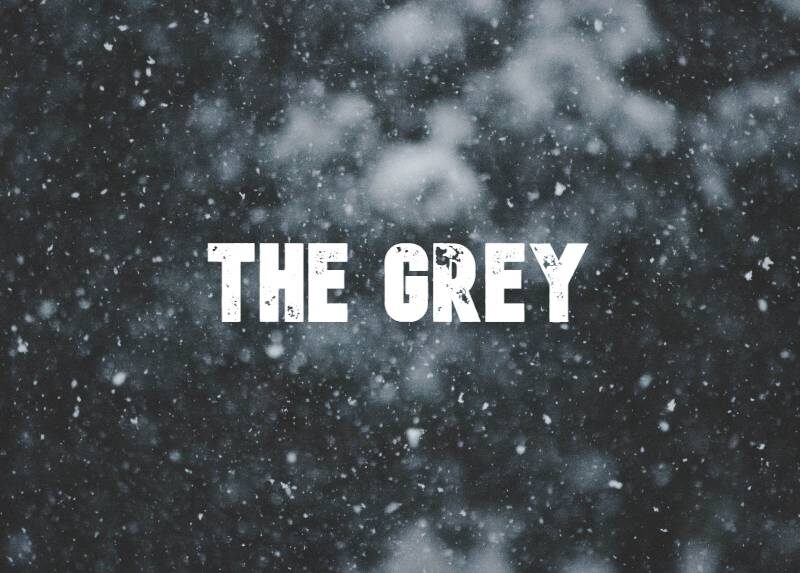 How survival thriller The Grey transforms Liam Neeson into a frontier wolfman – and what that says about grief.

What is The Grey about?

A group of oil workers survive a plane crash in the Alaskan wilderness – only to find themselves hunted by a wolf pack. It’s down to huntsman John Ottway (Liam Neeson) to lead the survivors to safety.

This article unpacks themes, symbols and interpretations of 2011 survival flick The Grey – with spoilers.

How The Grey is (kind of) a werewolf movie

In folklore, the werewolf is a man (usually) who transforms into a wolf-like creature. Usually the transformation comes about after a bite or attack by another werewolf.

The werewolf in The Grey is metaphorical rather than literal. There’s no gruesome physical transformation or murderous rampage.

Instead, huntsman John Ottway is bitten by a wolf after his plane crashes in the wilderness. The movie then follows his subtle transformation into a wolf-like man. Ottway even references this himself: “Maybe I’ll turn into a wolfman now.”

He doesn’t actually become a merciless, four-legged killer. But he does learn to assert dominance over the rest of his ‘pack’, and to think and react like a wolf.

We know he does this successfully, because the movie ends with Ottway facing down his alpha wolf counterpart with makeshift claws and steely resolve.

The werewolf may be more symbolic than real, yet the film undoubtedly draws a connection between men and wolves in a multitude of ways.

How the survivors mirror the wolf pack

After the plane crash, the remaining band of oil workers form a tenuous bond. They do this out of necessity, even though there are tensions between them (notably Ottway and Diaz).

In fact, even while Ottway is explaining how the wolves function, the survivors are mirroring their canine counterparts.

Shortly after the men reach the bank of trees, they hear disturbing noises from the dark. It’s the wolves fighting each other.

Wolf whisperer Ottway explains: “Whatever that challenge was, the alpha put it down.”

Just moments after this, the tension between him and Diaz comes to a head, with Ottway likewise establishing himself as the alpha.

Then the men – through fear and frustration – attempt to fight back against the wolves, borrowing their strategy:

Later, flushed with the success of their first kill, Diaz yells: “You’re not the animals – we’re the animals!”

Of course, he’s only half right.

Ottway already has a connection to the wolves before his ‘wolfman’ encounter. He’s a hired killer, employed by the petroleum company to watch for and slaughter wolves before they can harm the workers.

Ottway even kills a wolf at the start of the film. The kill is almost too easy, because the wolf has strayed into human territory – and Ottway has a working gun.

Compare this to the end of the movie, when the alpha wolf comes for Ottway. Now the roles are reversed. Ottway is in the wolf’s den, and has only the most basic weapons to stave off the inevitable.

Talget’s earlier words come to mind here. “Wolves are the only animal that seek revenge,” he claims, to much derision. It sounds like a campfire ghost story, yet in a cinematic way it resolves one aspect of the film. Ottway kills the wolf. Then the wolves come for Ottway.

Ultimately, the wolves re-establish their dominance. They reclaim their territory, but also their way of life and death.

Does Ottway die at the start of the film?

Ottway thinks about killing himself. He writes a farewell letter to the wife who left him, then steps outside with his gun. He even repeats his father’s poem, which is used throughout the film as an elegy (notably in the final scene, when Ottway once again faces death).

However, instead of a gun, we hear a wolf howling in the distance. It breaks Ottway out of his death reverie. He remembers the wolf he’d shot earlier that day, and marvels at the fine line between living and dying.

We assume Ottway chooses to live. This becomes increasingly poignant as the film progresses because, having chosen to live, survival becomes harder. This is a broader theme in the movie: the appreciation of life and love only after or on the point of losing them.

But what if Ottway didn’t hold back from killing himself? What if the the wolves in that early scene are also symbolic, replacing the more graphic scene of suicide that we’re not shown?

Their howling then becomes a bone-chilling cry of mourning. And the dying wolf, rather than a memory, is a metaphor for Ottway dying.

This makes the rest of the film Ottway’s hazy death dream in the last moments of his life, and there’s some evidence which supports this. Consider the way Ottway’s consciousness flits in and out of reality, memory, dream and death (i.e., the memories of his wife, who we eventually learn is already dead).

Many of the men are visited by ‘angels’ just before they die. They imagine living and dead loved ones, who lead them peacefully into the afterlife. Ottway isn’t visited by his dead wife in the same way. Instead, she’s with him constantly throughout the film.

It’s almost as if she’s trying to guide him to the afterlife throughout, but he fights her and the acceptance of his death – in the same way that he refuses to acknowledge her death until the final scenes.

So the film touches on fears of mortality, and the painful ways we grieve, in different ways (see also Don’t Let Go). But it also represents depression.

British prime minister Winston Churchill famously referred to depression as his ‘black dog’. This seems particularly relevant to a film replete with images and metaphors of wolves.

Ottway’s struggle throughout concerns depression as much as survival. That’s also what the circling wolves represent. He has no life without his wife, and no will to live. His existence is so painful that he wants to leave it for good. Yet it’s only when he faces death that he learns to live – or at least to fight for death on his own terms.

“Live and die on this day”

The poem by Ottway’s father becomes an elegy for the doomed survivors, but also represents the film’s treatment of death and grieving.

You could interpret the final lines as the circle of life. One wolf dies, and Ottway lives. Later Ottway must die, and the wolf lives. Either way, life finds a way. While living can be tough, we always have the choice to struggle on.

But as touching as this is, the poem is also slightly suspect, especially in the masculine message it passes from father to son to brothers-in-arms.

Firstly there’s the suggestion that facing death is the greatest affirmation of life. And frankly, that just seems to sell existence short.

Secondly that there’s nobility in facing death like a soldier – whose job you might say is both to live and to die. (Sci-fi horror Prometheus has a similar message about masculinity.)

Compare also King Henry’s speech in Shakespeare’s Henry V, which begins “Once more unto the breach, dear friends, once more”:

Henry’s speech calls on men to draw on their animal nature in order to survive.

However, Ottway’s men are no match for their enemy. They can’t fight animals on the same terms, not without guns and other constructed advantages.

Still, Ottway’s motto advises them to dig deep and fight for life. Perhaps it’s also a reminder to “rage, rage against the dying of the light“.

We all of us one day will die. Given that poisoned knowledge, our only redemption is both to face death without turning away, and to make our lives meaningful – even in the small moments.

A brief introduction to The Machine Stops, by E.M. Forster