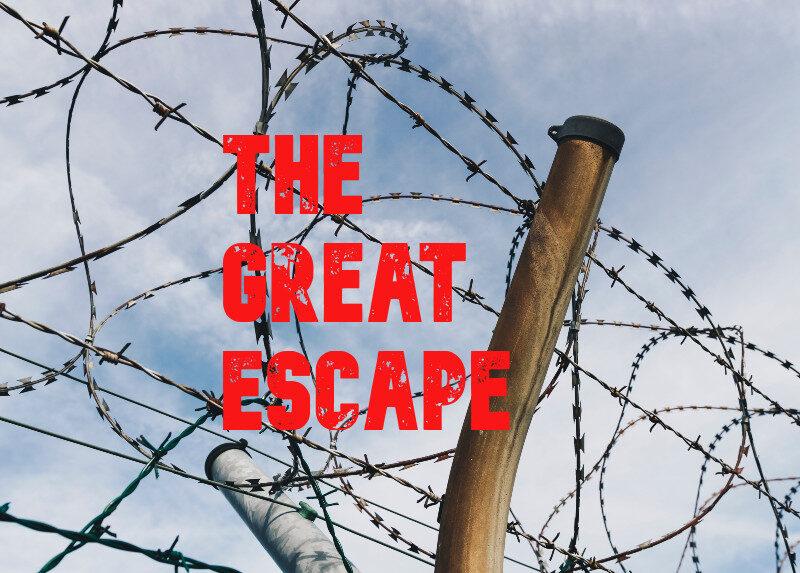 Widely regarded as a classic film about war (though not without its controversies), The Great Escape often crosses over into heist movie territory.

What is The Great Escape about?

Allied prisoners of war stage an audacious escape from Stalag Luft 3 in 1944. They dig three tunnels under the noses of their Nazi captors to break 250 men out of the camp. The film reveals how they pulled it off – and the plan’s tragic consequences.

It’s based on a true story

Australian writer Paul Brickhill published The Great Escape in 1950 as an account of the escape from Stalag Luft 3 . Brickhill had a role in the real-life attempt as leader of a lookout crew. His claustrophobia cost him a place in the final break-out, a disappointment that probably saved his life.

While based on Brickhill’s book, the 1963 film has overtaken it as the definitive account of events, despite its dramatic licence. The film’s opening text explains:

“Although the characters are composites, and time and place have been compressed, … every detail of the escape is the way it really happened.”

Actually, dramatisation means some details were not quite as shown on screen. For instance, the real escape took place during harsh winter. On the night of the escape the ground was frozen solid and it took an hour and a half to defrost the exit hatch.

The biggest – and most controversial – tweaks were about box office appeal. While many Americans were part of the real-life plot, they transferred to another camp before the break-out so weren’t part of the final escape.

The movie plays this very differently in Steve McQueen’s starring role, not to mention his fictional motorbike sequence.

It also underplays the scale of some aspects of the escape effort. For instance, as well as dismantling beds to shore up the tunnels, the men spirited away 52 twenty-man tables, none of which the Germans spotted until much later (same source as above).

The film fudges some details to craft a captivating story, but it hasn’t always been well received, either by critics or the men who lived through it.

And yet it’s those aspects of dramatisation – the tweaks – that reveal why the film works as it does, and why it’s so memorable.

The Great Escape and the heist genre

The Great Escape isn’t a heist movie as such, but it does share some significant aspects with the genre.

There’s no robbery at the heart of The Great Escape, though you could say the men are out to steal something truly priceless: their freedom. Winning means outsmarting goons and overcoming thugs … and that already sounds like the heist genre modern audiences are familiar with.

The biggest nod to the genre lies in the film’s opening section. The focus here is on introducing the principal characters and – more importantly – their role within the organisation.

These men have real names: Roger, Eric, Willie and even Virgil. However, we get to know them better by their code names, as Big X, the forger, the scrounger. Examine many heist films and you’ll find something very similar, or a variation of it.

In 1992’s Reservoir Dogs the anonymous crew go by colours and, naturally, everyone wants to Mr Black. In Ocean’s Eleven (2001), each member has a specific role or talent: the gymnast, the explosives guy, the pickpocket.

The other detail of note is the men’s devotion to Squadron Leader Bartlett or Big X (Richard Attenborough). Faced with the task of creating travelling outfits for 250 men, stunned tailor Griff can only agree to make it happen, as do the rest of the crew. [According to Brickhill the tailor first said it was impossible.]

This precedent of hierarchy and respect comes full circle at the end of the film when Ashley-Pitt (David McCallum) sacrifices his life to buy Bartlett an escape from the train station.

A league of gentlemen

Harsh as they were, conditions in the Stalag Luft 3 we see on-screen are markedly, even problematically, different from Nazi concentration and death camps.

The guards in the film treat the prisoners with a degree of respect. British and Nazi officers salute each other and play at war by a set of rules (the Geneva Convention) conspicuously absent in other camps. At the end of the film, the Kommandant noticeably mourns 50 murdered Allied officers, even as the ideology he serves seeks to exterminate an entire race of people.

Notions of class are inherent in this double think. In Britain, officers were historically drawn from the higher social classes; they were gentlemen. In turn, officers recruited from the lower classes during wartime were afforded temporary gentlemen status.

What does this have to do with heists? Well, heist stories also invoke images of gentlemen, or the honourable thief. In 1960 caper The League of Gentlemen, a gang of ex-army officers (i.e., de facto gentlemen) pull off a bloodless revenge heist.

2011 remake Ocean’s Eleven revisits this idea of noble revenge; compare too how George Clooney’s Danny Ocean spends much of the film in a suit. Suits – the hallmark of the hoodlum gentleman – are also in play in Reservoir Dogs.

The Great Escape is very much an honourable heist for noble reasons, and its crew consists of officers, gentlemen and protectors (more of this below). But, its treatment – at times boisterous and comedic – is troubling given the wider context of the holocaust.

The before and after in heist movies

Heist movies often portray a sharply contrasting before and after. There’s the build-up to a meticulously choreographed robbery. Then reality bites and, typically, things go badly wrong.

Similarly, The Great Escape is a film of two halves. At first it’s dedicated to the mechanics of the escape plot: building the tunnel, forging travel documents and creating outfits.

Then the plan veers off course – the tunnel is 20 feet too short – and the aftermath is messy and tragic. At this point the film switches to external locations as it follows the journeys of escapees as they scatter across Europe.

But The Great Escape doesn’t just switch locations mid-way; each half has a markedly different tone.

The initial arrival into camp is upbeat, and memorable for its premature escape attempts and cocky Allied resistance (lifted from Brickhill’s book, it should be said). It even has its moments of comedy.

This mood vanishes in the second half. The tightly ordered routine of camp life is in disarray, with the escapees having to improvise every action. Ashley-Pitt and forger Colin Blythe (Donald Pleasance) end up getting killed. And when we see the trucks once again streaming towards camp, this time they divert to a remote field and the men are shot.

You’ll find this kind of starkly contrasting before and after in other war films, too. The Dirty Dozen (1967) has its ‘prisoners of war’ similarly struggle to adapt to camp life, with plenty of comedic fallout. The second half of the film is brutally distinct. Note, though, that while the tunnellers use charm and wit to outdo the Nazis, the Dozen use brawn and machine guns.

Even that most unlikely of war films, The Sound of Music, follows a similar pattern. Once the love story resolves it switches to a more downbeat tale of escape, betrayal and refuge.

If The Great Escape is a film of two halves, it resolves its two narratives by recreating scenes and circumstances from inside the camp out in the real world. Predominately, that’s down to the film’s buddy system.

At heart, The Great Escape is about friendship and humanity in the face of tragedy. And with such a large cast of characters to keep track of, it shows this through smaller pairings.

Inside the camp, brash American Hilts (Steve McQueen) takes Archibald Ives (Angus Lennie) under his wing. They bungle a series of escapes as a two-man team before joining the X-organisation. When the Germans discover the tunnel, a heartbroken Ives makes a dash for the wire – and they shoot him.

Similarly, brash American Hendley (James Garner) takes “splendid” Colin Blythe under his wing. When Big X blocks a near-blind Blythe from the final escape, Hendley volunteers to get him out.

It’s touching comradeship and yet, as with the previous partnership of Hilts and Ives, the ‘gentler man’ dies in tragic circumstances. German soldiers find the pair when their getaway plane crashes, but Blythe, who’s now blind, can’t see them. And they shoot him.

Not all the friendships end as tragically. Tunnel king Danny (Charles Bronson) makes it to freedom largely through the encouragement of digging mate Willie. They’re two of only three men who make it out alive.

Side note: Leonard Bernstein’s score replicates the entire plot without words. Memorably, some of it coincides exactly with on-screen action, such as where German soldiers search the trucks with pitch forks. The characters have their own musical themes, too. When Hilts emerges from the cooler after his intentional capture, the score incorporates the Yankee Doodle Dandy tune he plays on the 4th of July.

The ending: victory or tragedy?

Of the 250 scheduled to leave, just 76 men make it through the tunnel. The Gestapo captures and kills 50 of them. We only see three escape: tunnel kings Willie and Danny, and Aussie tunnel engineer Sedgewick (James Coburn). So, was it worth it?

According to Big X’s instructions, the escape is a success: it ties up the German army with unnecessary expense, effort and inconvenience. Tragically, he and his men pay for the victory with their lives.

As for the film, however, things end on a more upbeat note. Just as the image of the truck convoy repeats from the start of the film (albeit on a sour note), so does the image of Hilts, the cooler and the baseball.

The final imagery is a testament to resilience and resistance, and is as potent as any war-time positive propaganda. Keep in mind the film was released during America’s war in Vietnam, so arguably it is partly that too.