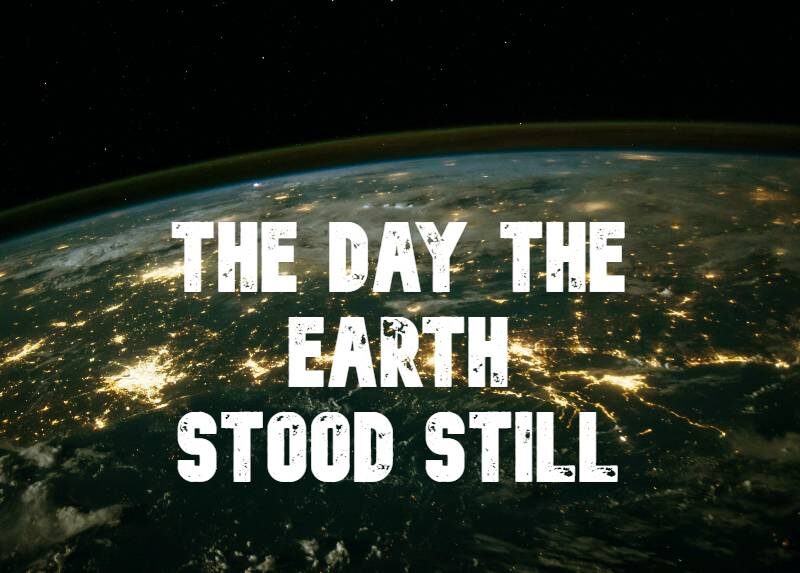 The 2008 remake of 50’s classic The Day The Earth Stood Still blends sci-fi speculation with modern-day environmental angst. Can we survive if we don’t look after the Earth – and each other?

What is The Day The Earth Stood Still about?

Astrobiologist Helen Benson (Jennifer Connelly) is among a group of scientists summoned when an alien craft lands in Central Park. Benson helps its pilot Klaatu (Keanu Reeves) escape. Then she learns his arrival marks the destruction of human civilisation – unless Helen and her son Jacob (Jaden Smith) can change his mind.

This article unpacks the metaphors and meanings of 2008 remake of The Day The Earth Stood Still – with spoilers.

The creed of Science Fiction

“Science” Fiction: the genre wears its secular credentials on its sleeve, and yet its stories repeatedly invoke religious messages and imagery. So it is with The Day The Earth Stood Still, which borrows from biblical tales, images and prophesy.

An intergalactic messenger is sent from the heavens to Earth where, like Jesus, he’s born in human form (Helen explains this ensures Klaatu can survive our environment). The messenger comes bearing dread greetings: repent or die.

Believing that humans can’t be saved and won’t save themselves, Klaatu marks the species for destruction. But first, he herds the animals into arks for evacuation (see also Knowing). Along the way, he raises the dead.

A plague of insects kick-starts the apocalypse. But at the eleventh hour, and after many prayers from Helen, Klaatu halts the extermination. He sacrifices himself to save mankind. And then – if we’re to believe Jacob’s closing remarks – he returns to the heavens. Miraculous, no?

Klaatu as a Christ figure is common to the 1951 movie, too. In it, Klaatu dies and is resurrected by the automaton – a controversial move at the time.

A story about grief

The Day the Earth Stood Still sells us a potent picture of apocalypse, ecological vandalism and human failings. It’s also a story about loss.

Helen and Jacob are trapped by grief. As step-relations they’re not sure how they belong together; heartbroken Jacob pushes away particularly hard. As a broken family their quest in the film is to reunite. The impending apocalypse first makes this much harder, then becomes the glue that fixes them.

In the meantime, Jacob’s character arc sees him move through a symbolic grieving process. He struggles with loss, denies his emotional devastation, and takes out his anger on Helen (and Klaatu). Later, he begs for the redemption of resurrection when he pleads with Klaatu to bring his dad back.

For all the miracles Klaatu performs, however, the answer is an astonishing no. Really, the refusal is another form of healing touch. It’s only when he accepts the finality of death that Jacob can move on.

Of course, in keeping with the film’s other spiritual parallels, Klaatu tells Jacob that:

“Nothing ever truly dies. The universe wastes nothing. Everything is simply transformed.”

It may be scientific fact, yet given the film’s rampant religious imagery it feels more like a sell for the afterlife.

However, there’s another metaphorical sense of grief to this story. Like Knowing, it functions as an elegy for a doomed species.

Redemption just out of reach

Klaatu’s message is that humans are prone to violence and destruction, and the Earth is paying the price.

The 1951 movie ends with a question: can humans change their ways before it’s too late? In the remake, the question is answered for us: humans are helplessly, insatiably destructive – and not worth saving.

The film backs this up in a number of ways:

As Secretary of Defence Jackson’s words reveal, we think of the planet as a possession: “our planet”. Helen’s shortsightedness similarly sets up the plot twist. Klaatu is here to save the planet from us.

Klaatu’s intervention reveals our delusions of grandeur by sanctifying and safeguarding animal life. Devastatingly, this drops humans to the back of the line. And for all our tech and defence missiles – our perceived greatness – we can’t stop the inevitable.

At the precipice, we change

Unlike the original film, humans aren’t offered some distant threat to bring about change. Instead, we’re brought to the brink of destruction.

“It’s only on the brink that people find the will to change. Only at the precipice do we evolve.”

But Klaatu already knows the truth: we can’t change. And in the end, it’s Klaatu who changes at the brink of destruction.

Consider that Klaatu has no innate care for human life; he calmly munches a sandwich while a man has a heart attack in front of him. It’s only when he ‘feels’ the love between Helen and Jacob (and ‘hears’ the beauty of Bach’s music) that he understands love and, as a result, loves humans.

The Day the Earth Stood Still shows us humans are flawed in a fatal way. And the film’s weary message would appear to be that we’re not worthy custodians of the planet or each other.

We’re capable of great love – and our stories reinforce that this alone can save the world. But however much we see evidence of our failings, we can’t change. We may despise our weaknesses, but we enjoy the comforts they buy us.

In the end, Klaatu gives humans a second chance that they haven’t earned: ironically, that’s the definition of love. The implication is that Klaatu doesn’t just witness Helen and Jacob’s love, it transforms him: he learns to love humans because they’re capable of love.

So what happens after the movie’s storyline: do we change or not?

Well, the film is pretty clear that we can’t change. Instead, Klaatu limits our potential for destruction by disabling all human tech. All over the world the lights go out, and the Earth comes to a standstill.

In the 1951 film, this global power cut is a 30-minute window of intervention. In the remake, it’s a winding back of industrialisation to more pastoral (read: innocent) times. Of course, human history amply demonstrates we’ve never needed machines to destroy the world and each other.

Nonetheless, the great pause is a symbol of hope, albeit with strings: if we can’t change of our own volition, perhaps we can be tamed for our better good.

The human characters in the film toy with apocalypse – and what’s interesting is that the plot serves this up twice, metaphorically speaking.

Jacob and Helen’s world ends when a loved one dies. Later, they deal with a more literal apocalypse. What’s different each time is how they feel about each other.

Resurrection appears in multiple ways, too.

During a visit to Earth in 1928, an alien sphere collects DNA from a mountaineer whose body is later reincarnated as Klaatu. Klaatu smashes then resurrects a policeman (though arguably that’s like a cat playing with its food). And there’s an implied resurrection when a ‘transformed’ Klaatu returns to space.

Even the Earth stops twice. The film ends with a power cut that brings the planet to a standstill (good luck if you’re in surgery or in a plane at the time, I guess). But earlier panic causes many people to flee their homes and jobs. Stock market trading falls through the floor. Progress once more stops.

The automaton in the 2008 remake doesn’t have a name. In the 1951 film, it’s Gort. Either way, what’s most remarkable is that it’s the shape of an enormous man. Why is this?

Well, one way of reading the symbolism is that it represents the ‘almost man’. In other words, figures, people and things that look like men – but aren’t quite.

The automaton is the most obvious example. He’s an alien being that looks like a man, yet isn’t human. This is exactly the case with Klaatu as well.

Helen’s grieving son Jacob is another example. As a young boy he’s almost a man … but not quite. The film underlines this in his first scene, with the close-up of the razor. He too stands on a precipice, between childhood and adulthood.

Later, when Jacob breaks down at the cemetery, Helen comforts him. “I see him in you,” she says, referring to Jacob’s dead father. So again, Jacob looks like but isn’t quite a man (here a specific man – his father).

Regina Jackson is a woman acting in a man’s capacity (in the film’s universe, that is). “Until this situation has some kind of resolve, I am the eyes and ears of the presidency,” she says. Ultimately, when the president orders the final strike, it’s relayed through Jackson.

The film repeats this motif of the ‘almost man’ in several places. But in another way, it’s quite fitting that the automaton is man-shaped.

He represents the darker aspects within the human race. He looks human, but carries destruction within him. And like him, perhaps we are the virus that threatens to destroy the Earth.

The Day The Earth Stood Still (2008), directed by Scott Derrickson