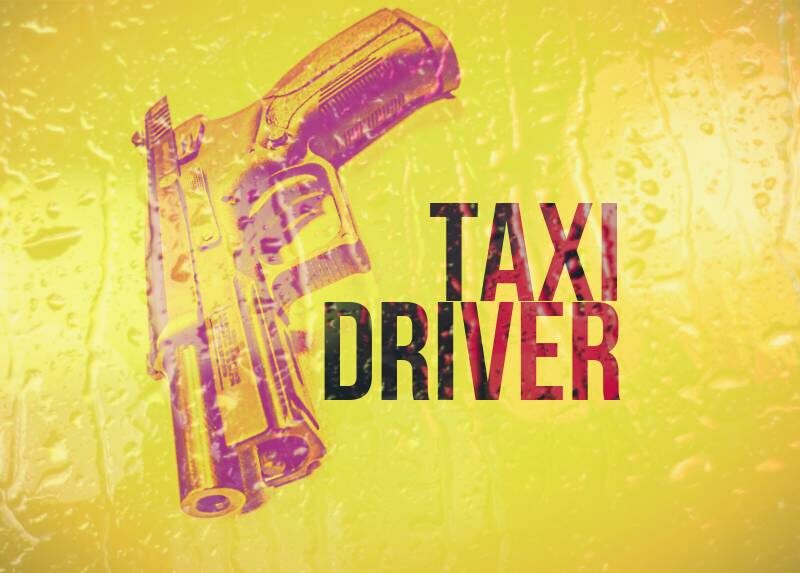 Unpacking the symbolism and significance of Taxi Driver, a film about loneliness, longing and murderous rage.

When 26-year-old army veteran Travis Bickle (Robert De Niro) takes night shifts at a New York cab firm, it plunges him into the city’s sordid underbelly. Tormented by insomnia and isolation, he keeps his growing psychosis under wraps. But with only toxic thoughts for company, Travis’s need for violent catharsis soon grows out of hand.

This page analyses themes and storytelling structures in Taxi Driver – with spoilers. Like the film, it touches on sensitive topics (abuse, violence), and won’t be suitable for everyone.

We first meet Travis as he’s pitching for work as a cab driver. He can’t sleep, he says, and if he’s going to ride public transport all night, he might as well get paid for it. The cursory interview that follows tells us a great deal about Travis; even his jacket reveals his name.

The interview is a smart way of introducing this character, but its impact comes from the juxtaposition that follows. As Travis reads from his private journal, it introduces a much darker personality. This isn’t just a diary, by the way – it’s a manifesto. It voices what Travis really thinks and, ultimately, what he’s going to do about it.

“Thank God for the rain,” he reads, “which has helped wash the garbage and the trash off the sidewalks.” Why the repetition? Because his simmering rage isn’t confined to litter, but the people he deems dirty and debased.

Like a malevolent rosary, it shows another side to Travis Bickle, and sets up the film’s inevitable conclusion. He’s sloganeering, just like the folk campaigning to put Senator Palantine in the White House. Like any politician, Travis means to sweep this city clean.

Hell and other people

In It’s a Wonderful Life, George Bailey imagines his town as a neon hell filled with sex workers and cheap regret. Taxi Driver inherits this image of cities as emblems of modernity. They promise limitless enterprise and entertainment … but they’re also prisons of isolation and immorality.

Travis experiences NYC as the latter. Of course he does: his cowboy boots remind us he’s a fish out of water, a rustic character in a slick, soulless city waiting to eat him alive.

Insomnia and psychosis don’t help. They make it impossible for him to see things as they really are. Instead, consumed by loneliness, he imagines everyone to be perverse. Always in the dark, all he sees are monsters.

This would be hard on anyone, but Travis externalises the dirt. After all, he’s not monstrous while there are pimps and drug pushes on the streets. As the delusions grow, so does his sense of purpose and power. At first, he prays for a rain to wash the city clean; later, he becomes the rain.

The narrative repeatedly returns to this contrast of clean and dirty. It’s there when Travis talks about people, and in the way his obsession spins between Betsy and Iris. He even ends each shift cleaning blood and semen off the taxi’s back seats. The fluids represent the human interactions he’s excluded from – though he takes it as further evidence of their depravity.

In the end, Travis is like any religious fanatic. He twists between his desire for intimacy, and hating the thing he can’t or may not have. It’s a torturous existence … and he leans into it.

The gun and the goal

Chekov’s Gun is a principle of dramatic writing that says if you fire a gun in Act 3, you introduce it in Act 1. This doesn’t have to be a literal weapon – often, it’s a throwaway detail that sets-up a satisfying resolution.

At the end of Taxi Driver, Travis guns down paedophile pimp Sport (Harvey Keitel). But the idea of the gun is introduced right at the start of the movie, when another driver offers to introduce him to a dodgy salesman.

Travis declines, but the gun’s allure only continues to grow. Soon, a passenger in a smart suit (director Martin Scorsese) is describing in stomach-churning detail what he’s going to do to his wife with a .44 Magnum.

When Travis finally meets the gun salesman, he asks for the same gun. And just as the manic businessman describes, he imagines shooting women through a window.

Note, too, that this meeting takes place in a hotel bedroom in the middle of the day – a setting redolent of fast sex and infidelity.

The gun, then, is symbolic of what drives Travis Bickle, and of the sexual intimacy that eludes him. He’s a lost and lonely young man in a hellish urban landscape. He watches the loving couples around him but, unable to unlock the mystery of intimacy, dreams instead of destruction.

Travis wants love and companionship. Either would be a noble goal, yet the intimacy he engineers is all about control.

He obsesses over political campaigner Betsy (Cybil Shepherd), seeing her as an angel in hell, a shining beacon of cleanliness among the urban filth:

“She was wearing a white dress. She appeared like an angel.”

In a rage, Travis declares she’s just like everyone else. Given his views about other people, it’s a worrying statement. For Travis, though, it’s an epiphany – Betsy’s no angel after all. She’s “stuck in hell”, i.e., a place of punishment and damnation.

Travis next turns to someone who isn’t yet a woman: 12-year-old sex worker Iris (Jodie Foster). In doing so he shifts from lover to father figure – coincidentally, another way of sublimating sexual frustration.

Meeting Iris unlocks a new path and sense of purpose. He still means to annihilate “the scum”, but by seeking to free Iris, now has justice on his side. Iris’s age saves her from Travis’s misogyny. She may be a sex worker, but he sees her as a (fallen) angel trapped in a hell not of her choosing.

Taxi Driver shows us extremes of heterosexual male desire, where women are either perfect or putrid, angels or whores (see also The Stepford Wives). Travis wants to save Betsy and Iris … yet imagines destroying other women. It’s a very selective recognition of worth.

We think of incels (involuntary celibates) as a modern phenomenon. That is, an online subculture of “heterosexual men who blame women and society for their lack of romantic success” (Anti-Defamation League). However, decades after Taxi Driver, the ADL’s description of incel attacks and manifestos closely resemble the film’s protagonist.

Of course, this doesn’t excuse his choices or chilling misogyny. And it doesn’t answer his racism: Travis is fearfully mesmerised by black men, and fantasises about shooting them, too. When he kills a black robber, it’s all at once mania, sexual release, and test run for a shooting spree.

Still, with zero social support, Travis is left to endure a psychotic nightmare he can’t escape. Inevitably, the nightmare spills into reality, putting others in the firing line.

Todd Philips’ Joker (2019) is similarly about a lonely young man who yearns for love, but listens instead to his broken inner monologue.

Both characters struggle with mental illness and institutionalised cruelty. They reveal themselves through written journals, and have imaginary interactions with other characters. Each sees himself as an innocent victim of an unjust society … yet wants women to pay the price.

Side note: gendering the genre

The figure of the maladjusted, ambiguous loner is a genre all of its own. Almost always male, he’s significant in fiction and culture by his responses to isolation or rage. Often, this intersects with mental illness or violence; often, women bear the brunt.

Is there a female counterpart for this? Not as such, begging the question: what happens to women afflicted by the same psychosocial issues? I don’t have a simple answer, but the work of writers including Sayaka Murata and Jean Rhys touches on its complexity and consequences.

The persona he’s trying on is that of a steel-eyed killer, complete with a costume of guns and ammo. Like the diary, this private show reveals the man Travis really is, or would really like to be.

So who IS he talking to?

Obviously he’s talking to himself in a mirror … and yet he’s also addressing his future self, the scum on the streets, and the senator’s secret agents. Each time he replays the conversation, he grows in stature.

Similarly, he refines and rehearses his mission statement:

Perhaps, though, this isn’t the first time we see Travis talking to imaginary mirror people.

Earlier, Travis picks up a passenger who talks about killing his wife. Maybe this is all heartbreak and big talk – or maybe this businessman is also a figment of Travis’s imagination.

Now, if he is real, the end result is still the same, i.e., he feeds into Travis’s desire to blow people away.

Keep in mind, though, that Travis talks to this customer in the mirror. And their one-sided conversation covers familiar ground: the wife is “dirty”, more so because she’s sleeping with a black man.

Either way, the scene foreshadows (or prompts) Travis’s actions: he buys a gun, fantasises about it, then uses it for real.

Incidentally, Sorsese has a cameo earlier in the film: he’s one of Betsy’s admirers outside Palantine HQ. While the characters aren’t connected, both seem to mirror Travis’s public and private desires.

A 2016 oral history of the making of Taxi Driver explains how Scorsese’s two cameos came about. Of note: it reveals Sport was originally written as a Black character, which connects with aspects of Travis’s responses to race.

In film and fiction, mirrors are often tools of transformation (see also Candyman). So it is for Travis Bickle, who peers into the glass as a man in search of validation, and climbs out the other side an assassin.

Perhaps we go through the mirror, too, because the world at the end of the movie is strangely off-kilter and dream-like.

Travis doesn’t die; he’s not even prosecuted for killing three men. Instead, NYC welcomes him as a hero – exactly as he imagined himself in the mirror all along.

Iris is doing better now too, and is even back at school. It’s a fairytale ending – and yet, it’s all just a little too neat. So is Travis’s final, magnanimous meeting with Betsy. Now she’s the one under his spell, while he’s over her.

Maybe it’s a sign of maturity, but like the hero’s welcome, it reeks of wish fulfilment and happy-ever-after. An ambiguous ending? Hell, yeah.

It’s no surprise Travis is drawn to a profession that enables his desires. In this story, like many others, the taxi is symbolic of the battle for control and destiny:

“all my life needed was a sense of some place to go”.

Driving a taxi makes Travis anonymous and invisible. He has access to the entire city – no questions asked. The ending returns Travis to this status quo: back to the night shift, back to roaming the city in the dark.

We can interpret this a couple of ways. Perhaps the bloody gun battle is the moral and sexual release that finally puts Travis at peace …

… or maybe he gets away with murder.

Keep in mind that when his attempt to murder Palantine falls through, it averts a massacre of innocent people. Instead, the final battle recasts him as outraged father figure, a vigilante against paedophiles and pimps.

The narrative’s get-out clause impels us to side with Travis, to see his crimes as a necessary vengeance.

But even if you don’t, the film’s dream-like resolution returns him to a state of ambiguity, in which nothing is certain, and the story runs in an endless, unfinished loop.