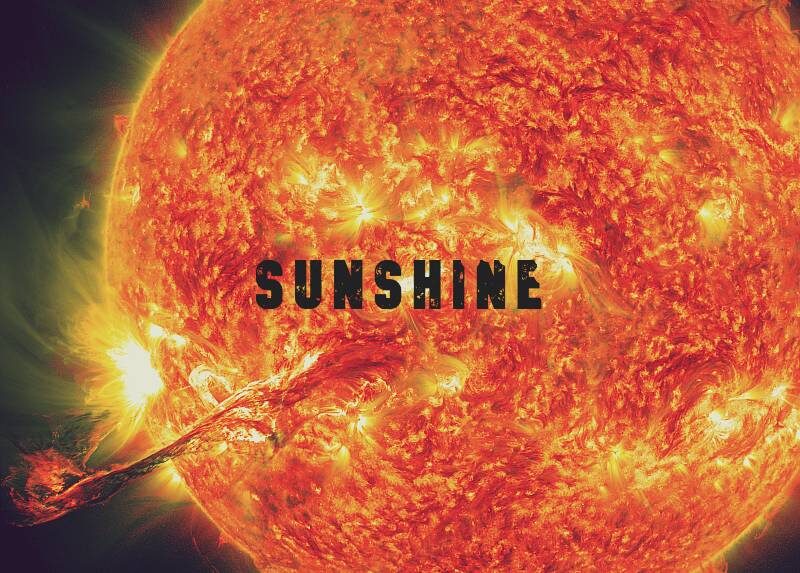 What is Sunshine about?

It’s some time in the future and the Sun is dying out, threatening what life remains on a frozen Earth.

Deep in space, the crew of the Icarus II plan to detonate a nuclear bomb at the heart of the dying star. But as they near their destination, the mission starts to go wrong in strange and subtle ways. Armed with only a single shot at success, the crew must decide how far they’re willing to go to save humanity.

The film’s title hints both at the crew’s dilemma and the effects of the mission. Life on Earth depends on sunshine: without it, “Mankind faces extinction”. But as they travel further into the dark the crew become increasingly addicted to, and damaged by, the Sun.

The film’s opening voiceover describes the payload as a nuclear bomb the size of Manhattan Island. During World War II, the Manhattan Project produced the first nuclear weapons.

At first glance, the Icarus project looks like the ultimate act of optimism. A ship will fly to the Sun, detonate a stellar bomb, then turn around and head home: simple.

And yet a multitude of signs suggest that’s never going to happen.

The ship’s name is the biggest red flag. In Greek mythology, Daedalus crafts wings from feathers and wax to escape from the city of Crete. His son Icarus, carried away by pride and arrogance, flies higher and higher towards the sun. The wax melts, the wings disintegrate, and the boy crashes to his death.

The first inkling for our crew comes as they near the Sun. They lose communication with Earth as they enter what they call the dead zone – another unfortunate name (see also Event Horizon).

“By the time you get this message I’ll be in the dead zone … this means you won’t be able to send a message back.”

This turns out to be painfully accurate. Capa dies detonating the bomb; no messages will ever reach him again.

Earlier, however, Capa describes his own death. His recurring dream of falling into the Sun reflects his fears, but also forecasts how the star will eventually consume him.

There’s a second significance of dust. In his 1980 book and TV series Cosmos, astronomer Carl Sagan said that “we’re made of star-stuff”. That is, the processes which created the universe and stars also produced the elements that make us.

As awesome as that sounds, in Sunshine, it suggests the crew are travelling to meet their maker, i.e., it’s a euphemism for death. Searle (Cliff Curtis) references this when he drops Sagan’s quote into his farewell to Capa, before dying on Icarus I.

There’s also the trope of the distress signal. In Alien and Alien: Covenant, the call for help is a doorway to destruction, while Event Horizon opens a portal to the dark when it docks with a missing ship.

Can we trust the ship’s computer?

The crew entrust their lives to onboard computer Icarus. However, the computer’s priority is to its mission objectives rather than individual crew members.

This leads to tragedy when Kaneda and Capa fix the ship’s damaged shields, but Icarus overrides Cassie’s manual control to keep the craft on target, killing Kaneda.

It’s slightly ambiguous, though. Icarus claims to take over the ship because of a fire in the O2 garden – seconds before we see fire break out.

You also have to wonder why Icarus interferes when Cassie takes manual control, but not when Trey forgets to adjust the shields.

This could all be coincidence rather than sabotage. The other possibility is that, like the rest of the crew, the computer is no longer thinking straight.

When Capa asks Icarus to simulate detonating the bomb, the program glitches. The calculations are so far into theoretical and unknown outcomes that they cause the computer to freeze-up.

Capa explains the moments before bomb detonation will be unreal:

This happens literally at the end of the movie. However, the distortion of time, space and thinking has already started. The crew and visual effects become increasingly disoriented and fragmented over the course of the film.

Pinbacker as the ‘alien monster’ of the movie is an ambiguous figure. His final distorted mission message reveals Icarus I has given up:

“We are dust, nothing more. And to this dust, we will return. When He chooses for us to die, it is not our place to challenge God.”

His crew then burn to death in their observation room. We assume Pinbacker must be among them, only for him to appear on Icarus II as if by magic (actually he walks over, then destroys the docking platform).

Far from ghostly, Pinbacker is still human: Capa discovers he’s onboard because a fifth person is using oxygen.

So it looks like Pinbacker sacrificed his crew (his final message dates from before the ship’s disappearance). Evidently already unbalanced by that point, the following years of crushing isolation drive him to grandiose thinking and imagined conversations with God.

But if Pinbacker is human, what’s the deal with the distortions? Well, Capa explains this when he talks about the effects of gravity. Pinbacker, infected by his extreme exposure to sunshine, is a particularly potent example of it.

This explains the abrupt subliminal flashing images on Icarus I, which are of a photo of the first crew. The same thing later happens on Icarus II, signalling a connection with the fate of the other ship.

The visual effect is a proximity alert for Pinbacker. We momentarily see things though his eyes: fragmented, distorted and out of sync with linear time.

Staring into the sun

If Pinbacker is a warning about the effects of isolation and extreme tanning, the symptoms are already present on Icarus II.

The film’s visuals mimic this obsession. There are the repeated close-ups of Pinbacker’s eyes in-person and on video, plus shots of the eyes of other crew members as they stare into the Sun.

Images of the Sun and of the space craft pushing its payload also look like eyes and corneas.

It’s a dangerous combination, though. Staring at the sun causes blind spots, in the same way that the crew slowly lose sight of sanity.

If Icarus II faces an impossible journey, it’s made possible by super-human effort. In fact, Sunshine features a series of sacrifices:

Remember how Mace and Capa fight at the start of the film (and again in a repeated scene when the mission goes wrong)? Despite their animosity, Mace knows Capa is mission critical.

With the very notable exception of comms officer Harvey, each is willing to sacrifice themselves to the mission.

If this sounds – and is – bleak, it’s also hopeful. The film asks: how far would we go to save our species, knowing we ourselves won’t make it?

Pinbacker takes a fatalistic position, saying we shouldn’t try to outrun death: “It is not our place to challenge God.” Of course, he weakens his argument by murdering the crew rather than leaving their fates to God’s omniscient powers.

Despite Pinbacker’s lack of humanity (literally the act of being humane) the deaths of the few save the world. Just as Corazone finds a green shoot after the O2 garden is destroyed, survivors on Earth see the Sun brighten in the sky.

Capa detonates the bomb and, in the warped gravity at the heart of the Sun, experiences a frozen second of beauty and grace. Life finds a way … even when it doesn’t.

Why The Happening (2008) never explains its killer virus