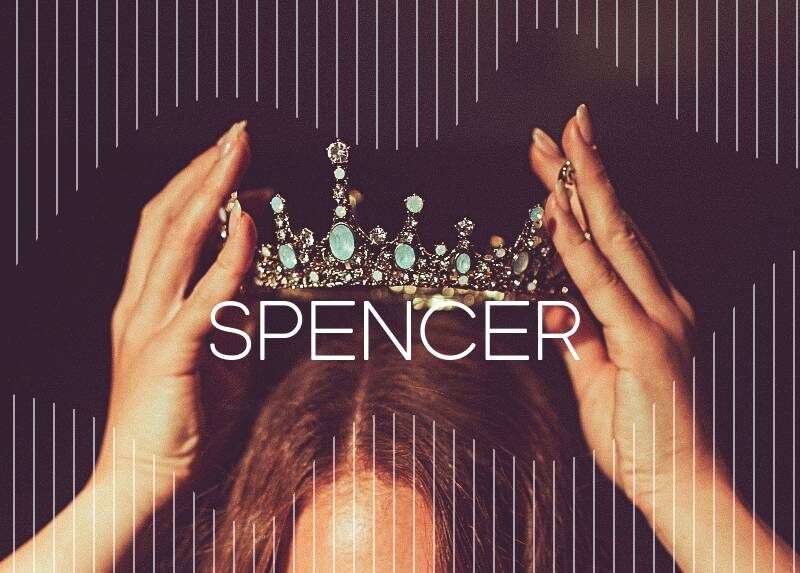 She was Lady Diana Spencer before marrying into the royal family, but Pablo Larraín’s film suggests the Princess of Wales never really shed her former identity.

What is Spencer about?

If Netflix series The Crown is a (fairly) faithful recreation of historical fact and fashions, Spencer styles itself as fable born from tragedy. Set during Christmas 1991, the film zooms in on Princess Diana at the Queen’s Sandringham estate.

By turns visually sumptuous and disturbingly candid, the film uses hallucination and reverie to reveal a princess trapped in a fairytale.

This article is an analysis of Pablo Larraín’s 2021 film about Princess Diana – with spoilers.

At war with the Princess of Wales

The film hangs on snippets of reality: Christmas at Sandringham, Diana’s nearby childhood home, and Prince Charles gifting identical jewellery to his wife and mistress.

However, the plot fictionalises these to paint a broader picture about the tensions of modern royalty. Its most significant commentary is about the subtle and constant war waged against and by the princess.

As Diana (Kristen Stewart) herself says, she simply doesn’t fit into the royal family. She has gauche, unfashionable tastes for fast food and Phantom of the Opera, things she labels “middle class”. And yes, she means it as a burn.

For all her privilege, Diana has very little power. Others pick out and assign her clothes for each meal and family gathering. The outfits are labelled PoW: Princess of Wales, of course, but also nodding at prisoner of war.

There’s certainly a sense of confinement. At one point, an assistant sews Diana’s curtains shut. Later when she escapes to her childhood home, she finds it boarded up and covered in barbed wire.

The clothes are a flashpoint. Diana won’t stick to the proper order of things, just as she won’t turn up to meals on time (and then won’t eat). The machinery of royal tradition takes aim against this in unkind ways: banishing Diana’s preferred personal dresser, for instance.

The threat is also there in the constant surveillance. A sign in the kitchen warns the staff to keep noise down because “they can hear you” – something Diana learns the hard way.

Household equerry Major Gregory (Timothy Spall) also keeps a close eye on her. In fact, while the film keeps the royal family largely mute, it presents Gregory as the dominant force in controlling Diana’s behaviour.

The film features an almost endless run of oppositions, including:

In real life, Diana’s allure came from seeming to be both regal and real. The press even initially styled her a commoner, i.e., “one of us”, though she was born into nobility. She was still Lady Di, after all. Still, her modernity brought its own difficulties, both to Diana and the royal family.

Take tradition, which appears throughout the film as a choreographed dance performed by soldiers, kitchen staff and servants. The rules even pin the royal family into their places: they must hunt on boxing day, eat at set times, and perform their roles for the public.

Diana struggles with this. The household struggles with her lack of conformity in turn. This isn’t just about the Queen’s displeasure, by the way. The staff need Diana to play her role, so that they can play theirs. Ultimately, all have sworn the same oath: to preserve tradition and the office of the Crown itself.

Anne Boleyn and the cursed pearls

Lady Diana entered public consciousness as a “true” princess: one who nabbed her Prince Charming and lived happily ever after.

Yet there have always been two kinds of fairytale. One ends with happy ever after. The other – consider Bluebeard and Red Riding Hood – is the stuff of nightmares.

Anne Boleyn, who appears in Spencer as a ghostly hallucination, represents grim fairytale reality. Boleyn was Henry VIII’s second wife, and mother of Queen Elizabeth I.

Her marriage was also a fairytale ending … until Henry had her executed on trumped up charges of adultery so he could marry Jane Seymour.

Diana sees Boleyn’s life as her own inescapable fate: a loveless marriage, infidelity and death. On screen, such fears present as manic delusion – and yet this really was her fate. The film plays a knowing game with hindsight (and the resulting conspiracy theories) by having Diana innocently ask whether the royal family will have her killed for being late to tea.

The Boleyn connection is also there in Diana’s Christmas gift from Prince Charles, a string of pearls that he also gives his mistress. Boleyn’s ghost claims she wears a pendant Henry gifted his mistress, too.

In real life, Diana would say infidelity cast a shadow over her marriage and coincided with the beginning of her eating disorder.

The film returns to this with striking visuals when Diana imagines snapping the necklace during dinner and eating the pearls. It illustrates the pain of infidelity, but also the complex patterns of her bulimia (the illusion gives her the need and means of regurgitating her meal).

This makes Spencer a difficult film to watch, not for its subject matter but for its raw portrayal of mental illness. The film almost certainly exaggerates some of these behaviours. And yet the effect is to signal how much more effort must have been spent – by family, friends, press and public – to avoid seeing or speaking about them.

When Diana wonders how the public will remember her, she fearfully asks if it might be as “Diana the insane”.

There’s a sadness to this given the film’s focus on her fragile mental state. But it also highlights the voracious appetite that remains for Diana’s image. It’s currency; it has a value that has nothing to do with the reality of her as a person.

The film illustrates this through its recreation of Diana’s iconic wardrobe. We’ve normalised consuming Princess Diana through her clothes – her wedding dress, for instance – as well as other photos that appeared in the press. The film plays with these more subtly: Diana posing alone on the steps at Sandringham feels similar to her posing alone at the Taj Mahal in 1992.

So marrying into royalty is both a double-edged sword and a one-way system. Diana dreams of returning to her real, childhood home, and cries for lost innocence and freedoms.

For all the tensions she faces, the biggest is that of what happens to a woman’s identity after marriage. Diana has given up her name – Spencer – but it continues to pull her back to the past (real and imagined). Meanwhile, she feels lost in a family she can’t belong to – because she hasn’t been groomed for the harsh reality of royal life.

The Spencer history is a loop that repeats like a half-remembered dream. The film’s soundtrack conveys this, too. It consists of a repeated melody we hear on the radio, then as organ music in church and again as a background tune.

We hear it in the film’s closing scene, too. Diana has broken free from Sandringham and is eating junk food with her boys. She flashes a rare smile. Then the melody returns – and with it the burn of collective hindsight, and of everything we know she didn’t escape.