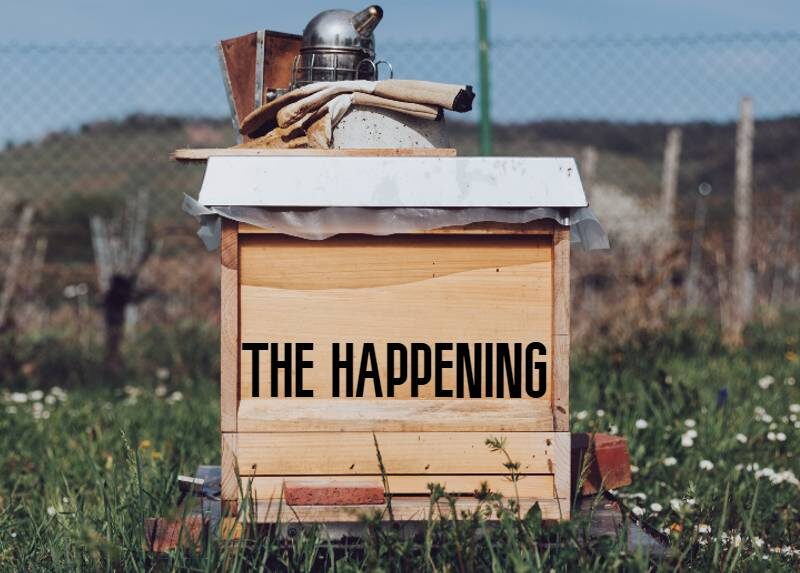 Is The Happening a black comedy, disaster flick or ‘bee’ movie?

What is The Happening about?

When New Yorkers start dying en masse – killing themselves in gruesome ways – the authorities suspect a terrorist attack. Science teacher Elliot (Mark Wahlberg) and wife Alma (Zoey Deschanel) are caught up in the rush to evacuate. Together with other survivors, they race to stay ahead of an invisible killer.

This article explains The Happening – with spoilers.

Is The Happening a film in search of a genre?

Like sci-fi disaster movie Knowing, Shyamalan’s The Happening doesn’t always get a lot of love.

Kim Newman writing in Empire in 2009 even called Knowing an M. Night Shyamalan film – as a nod to its failings. Value judgements aside, there’s some truth to the comparison.

Both movies tell a bleak story about extinction. Both lack traditional closure, because there’s no escape from the threats they portray. And it’s hard to truly like either because of the way they jump between genres and subvert the genre rules audiences have come to rely on.

The Happening is a broad mix of science fiction and disaster movie. It contains elements of plague and zombie stories. And – of course – the heart of the movie is about love and family.

These multiple strands make it tricky to know where the film is going and why. It also leaves many questions unresolved at the end, perhaps deliberately but also … perhaps not.

Many movies successfully mash-up multiple genres. That The Happening is a mongrel isn’t its greatest or only fault – yet there are moments where viewers are left hanging.

What’s the source of the toxin?

We never find out where the toxin comes from, or why – because it’s not important. The idea of the invisible, airborne toxin is a MacGuffin: a plot device that sets the story in motion.

Hitchcock described the MacGuffin (or McGuffin) as something that the characters care deeply about, but the audience doesn’t – the stolen $40,000 in Pyscho, for example.

The toxin – or more specifically, its effects – is the movie’s inciting incident. It’s why Elliot and Alma are on the run.

However, the film is more interested in how they respond to and change ‘at the precipice’ (The Day the Earth Stood Still). That’s why the toxin is never fully explained.

We hear lots of theories instead: terrorism, plants, pollution, water contamination and a nuclear leak – none of which are confirmed. We then see the characters react to their own speculation.

One theory is that plants are fighting back against human pollution and over-population. So when two groups converge at the Clear Hill show homes, they trigger the toxin and die.

Yet later on, Mrs Jackson is alone when she’s attacked. Jess’s dad Julian also dies while in a small group.

This is an effective horror movie mechanism. We don’t know who the killer is, why it kills, and who will die next. Instead, the film shows us juxtaposed images – trees and bushes moving in the breeze, the wind whistling through a gap – and we draw our own conclusions.

Because the toxin is never explained, it’s not cured, either. The film runs in a never-ending loop: the final scene is the same as the opening one.

There’s no escape and, as with Knowing, this feels like a con, especially having just seen Elliot and Alma celebrating a baby on the way.

A film about grief

The Happening’s ending relies on a kind of Deus Ex Machina (a convenient plot resolution). The toxin runs rampant for 24-hours, then … stops.

Despite this, the toxin isn’t a throwaway concept. It introduces substantial themes that Shyamalan returns to repeatedly: grief and mental health.

The suicides in the film are incomprehensible and upsetting. Together with the unexplained toxin, these deaths make no sense – which is how we often experience grief and loss.

Shyamalan touches on this (and attitudes to mental illness) more explicitly in The Visit and Split, while grief gets an airing in Signs.

These films are often playful of and with storytelling devices – a fact that can get lost when the stories themselves are so dark.

What happens to the bees?

Science teacher Elliot tells his class that millions of bees have just vanished without trace. Moments later, we hear the first reports of a terrorist attack. We’re also shown a quote, attributed to Einstein, that:

“If the bee disappeared off the surface of the globe then man would only have four years of life left.”

There’s no proof Einstein ever said this, btw. The bees – and the quote – is another storytelling device. It foreshadows the coming disaster, one which can’t fully be explained.

Keep in mind, too, that fleeing animals are said to foretell impending natural disaster, an idea disaster movies often touch on. The Happening tells rather than shows us that the bees have gone, leaving us to connect the dots for ourselves.

The bee discussion is also a way for Elliot’s class – and us – to think about “an act of Nature, and we’ll never full answer it”. Their discussion mimics the movie to come: a strange event followed by many theories but no definitive answer.

That said, the film pursues a number of related ecological issues.

One character describes how plants evolve rapidly to deal with threats. A TV expert likens the toxin to a red tide that kills humans instead of fish.

Incidentally, this TV segment repeats that it may be “an act of nature – we’ll never fully understand it”, bringing the MacGuffin full circle.

There’s also a warning that the 24-hour toxin is a prelude. Humans threaten the survival of the planet – and the planet will fight back. Likewise, the film ends with the return of the virus.

It also references over-population, suggesting crowds trigger the toxin. The irony is that even during a disaster, human nature can be the bigger threat: the paranoid loner who shoots Josh and Jared, for instance, as well as Mrs Jackson.

The ‘unsafe bolt hole’ crops up a lot in disaster movies. Like Tim Robbins’ hideaway in Spielberg’s War of the Worlds, Mrs Jackson’s home represents the unreliable refuge – and mirrors the threat that lurks inside all humans.

What does the mood ring mean?

The Happening isn’t about bees or the mysterious toxin. It’s about a mood ring.

OK, it’s not – but the mood ring symbolises a key theme in the movie: love, marriage and family.

When they flee their home, Elliot grabs the mood ring first. Later we learn he bought it on his first date with Alma. It represents the way he feels about her, even while their marriage is on rocky ground.

And the movie doesn’t only end with the disappearance of the toxin. It concludes as a love story, with Elliot and Alma declaring they’d rather die than be apart. Surrendering to death (Elliot speculates) is what saves them.

Like Hitchcock, Shyamalan takes a cameo in each of his films. In The Happening, he plays the voice of Joey, the guy who keeps calling Alma.

Like many mainstream movies, The Happening puts its characters in pursuit of love and family.

The Moores need to fix their marriage. On the way they gain a daughter in Jess – a child who resolves Alma’s flightiness. As Julian tells her, “don’t you take my daughter’s hand unless you mean it.” At the end of the film, they get a child of their own as well.

Like any romance, the film has comedy elements, too. There are open jokes, such as Elliot talking to a rubber plant. There are wry jokes, such as Alma panicking about having tiramisu with Joey, and Elliot’s fictional revenge against a pharmacist.

There’s even a take on the backwoods farmer threatening to shoot strangers on his land (‘get offa my porch’) – except here, he follows through, executing two children in the process.

This is at least partly why The Happening isn’t memorable for its comedy. It’s a dark film with a cynical message about humanity – and a sense of humour to match.

Girls on film: why cinema loves the beauty pageant