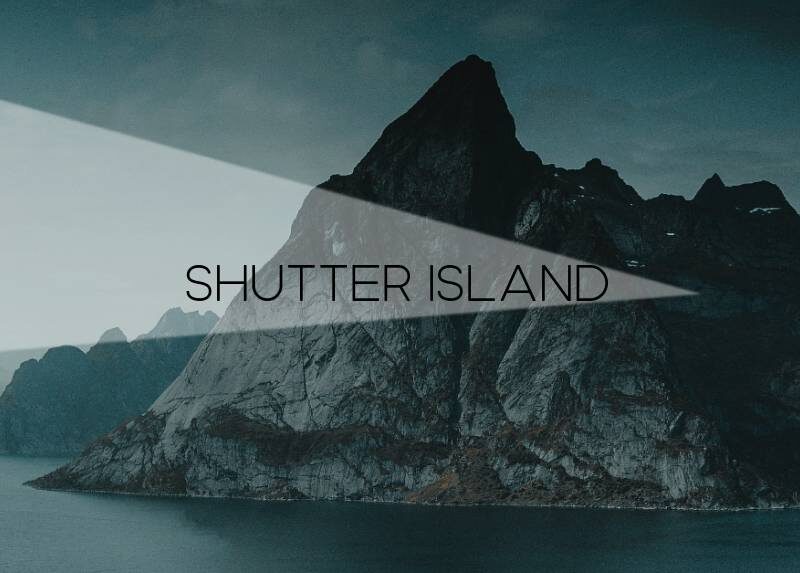 Do we make monsters of mental illness? Unpacking the signs, symbols and delusions in Scorsese’s Shutter Island.

US Marshal Teddy Daniels (Leonardo DiCaprio) arrives on Shutter Island one mist-filled day in 1954. He’s there with new partner Chuck Aule (Mark Ruffalo) to investigate the disappearance of a patient from Ashecliffe Hospital for the criminally insane.

Something about the case triggers Teddy’s past traumas, unleashing disturbing memories and hallucinations. Soon he’s chasing rumours of horrific experiments right here on the island … and the man who murdered his wife.

This page analyses the symbolism and storytelling in Martin Scorsese’s 2010 film, Shutter Island. It doesn’t get into Dennis Lehane’s source novel. Either way, expect spoilers.

One question underpins almost all screen stories: who am I? These narratives kick protagonists from their comfort zone, sending them on a journey that reveals – to them and us – what they’re really made of.

This is the meat-and-bones of the action and horror genres, but just as true of stories from Breakfast at Tiffany’s to The Crucible.

It’s also a ready-made parallel for tales about growing up and finding your fit in life. That includes the likes of Mean Girls and Whiplash, but equally applies to stories about adults (The Firm).

Then you have protagonists who knowingly mask their identity (Reservoir Dogs, Infernal Affairs) … and those who don’t know who they are at all: see The Bourne Identity, Memento, and Project Hail Mary.

So where does Shutter Island fit? Well, like most narratives, its protagonist journeys through peril to discover what he’s made of. The kicker here is that he quite literally discovers who he is. You see, Teddy Daniels is an unwitting amnesiac: the kind who doesn’t know that he doesn’t know.

There’s extra spice to this if you consider that Shutter Island is an allegory for film-making. It contains a film-within-a-film, with costumes, learned dialogue and even a director of its own.

As always, the big question is why – and what the heck does it mean?

Shutter Island’s twist is that Teddy Daniels doesn’t exist. The man we know as Teddy is Andrew Laeddis, Ashecliffe’s most dangerous prisoner. Andrew creates the role of Teddy to protect himself from unbearable truths … then completely inhabits the delusion.

Head psychiatrist Dr Cawley (Ben Kingsley) goes along with the charade. He stages an audacious, immersive role-play that sees hospital staff and patients recreate Teddy’s fantasy on a grand scale.

This is where we join the story, with Teddy turning up at the island as if for the very first time. In fact, he’s been a patient there for two years.

So the theatrics are the means of deception, one which pulls the wool over Teddy’s eyes as well as ours. But why?

Role-play is Dr Cawley’s last-ditch attempt to save Andrew from a lobotomy, a crude form of brain surgery once commonly used to treat mental illness (and, by implication, to control behaviour).

“If you saw the patient after the operation they’d seem alright, they’d walk and talk and say thank you doctor […] The fact they were totally ruined as social human beings probably didn’t count.”

In Shutter Island, the lobotomy comes to symbolise the abuse of mental health patients, and the hopelessness of medical staff who really want to help.

For Andrew to escape this fate, he must show remorse for his crimes. But to show remorse, first he has to remember …

What is Teddy supposed to remember?

Teddy’s investigation on Shutter Island represents a garbled version of the past:

Dr Cawley uses fantasy to drip-feed Andrew the truth. Hence characters re-use dialogue, from “why are you all wet, baby” and “an insect in the brain” to “milkmen, postmen, deliverymen”.

Similarly, when staff talk about missing patient Rachel Solando, they’re talking about Dolores. In fact, Rachel is the name of the daughter Teddy doesn’t remember having.

Instead, he blames pyromaniac maintenance man “Andrew Laeddis” for the fire that killed Dolores. Of course, he’s obliquely referring to himself.

So while Teddy’s true memories keep breaking through, they’re tightly coded, too symbolic to be immediately apparent.

For instance, his flashbacks from the liberation of Dachau also express his guilt at not being able to save either the camp’s victims or his own family.

The point of the investigation, then, is to let Teddy solve Rachel’s murder, thus discovering the truth about her killer. His resolution – as in all storytelling – depends on the narrative fragments finally slotting into place.

Cawley and co also use the investigation to break through to Andrew. Thus several scenes use audio triggers (i.e., the Mahler scene) or are therapy sessions, such as the cave dialogue with Rachel Solando. The latter setting is a significant metaphor for simulation and reality, i.e., consider Plato’s cave allegory.

It’s all a set-up

The film contains a number of signposts about the deception happening under our noses:

While some of these signs are visible with hindsight, others are more obvious. That is, some are meant to be seen, to guide our reactions to and through the story.

For instance, Cawley’s glance when he tells Teddy “Rachel” drowned her children signals a meaningful bit of information.

In any case, patient George Noyce reveals the whole scam at the halfway point (see also Get Out):

“This is a game. All of this is for you. You’re not investigating anything, you’re a fucking rat in a maze.”

Teddy doesn’t take this literally, which is ironic, because Noyce’s words reveal the truth he’s running from. Firstly, that he attacked Noyce (to stop him talking about his identity). And because Noyce tells him he must let go of Dolores – i.e., his delusions – if he wants to leave the island.

The deception unfolding on Shutter Island is a warped tale of identify fraud. No one is who they say they are; identity constantly shifts.

Beyond the intervention, Andrew’s psyche creates an even more complex puzzle:

For all the pretence, Andrew leaves behind clues that function as ‘safe words’ or ‘breadcrumbs’ to reality.

The Rule of Four is his anagram system. Edward Daniels is an anagram for Andrew Laeddis. Rachel Solando is an anagram of Dolores Chanal (her maiden name). Rosemary’s Baby plays a similar linguistic game.

Patient 67 is the patient Teddy can’t see: himself.

Costume changes also hint at Teddy’s unstable identity. He arrives on the island dressed as a policeman, but after the storm changes into orderly whites.

Shutter Island stars DiCaprio as a grieving widower trapped in a simulated reality … and so does 2010’s Inception. 2016’s Arrival returns to the burden of bereavement via the same musical motif: On the Nature of Daylight, by Max Richter.

Shutter Island surfaces a problematic history of mental health treatment, in which care, exploitation and abuse co-exist – a pattern any thinking society should want to keep questioning.

But do these fictions also reveal our misuse of mental illness for entertainment? Horror persists in making monsters of illness, while Shutter Island turns psychosis into narrative twist (a whole sub-genre of its own, incidentally).

Similarly, while Drs Cawley and Sheehan are commendable for trying to talk Teddy back to reality, how ethical is it to ask other patients to play along? One woman is visibly upset – and sure it’s another ‘Easter Egg’ to the twist – but she’s actually distressed:

“I can’t remember what I’m supposed to remember”

Ultimately, Andrew also can’t remember what he’s supposed to remember. His brain resets once more, plunging him back into the safe identity of Teddy Daniels.

It’s a poignant, upsetting ending because Teddy seems to embrace lobotomy as a sort of living death.

Earlier, Dr Cawley explains how Andrew created a story which turns him from murderer into hero. Now Andrew resigns himself to a permanent altered reality, repeating Cawley’s words:

“Which would be worse – to live as a monster, or to die as a good man?

Teddy’s investigation is a means of approaching the truth about Andrew and Dolores. But it’s also about the treatment forced on very disturbed patients (at least in 1954). To that end, his journey – psychological and literal – is always towards the lighthouse.

Memories of Dachau reveal immense survivor guilt and shame. It’s also an allegory for monstrous human nature, drawing a parallel between Nazi torture disguised as medical experiment, and the lobotomy.

If we’re talking signposts to plot resolution, well, this story was always about the lighthouse … and it’s no beacon of hope.