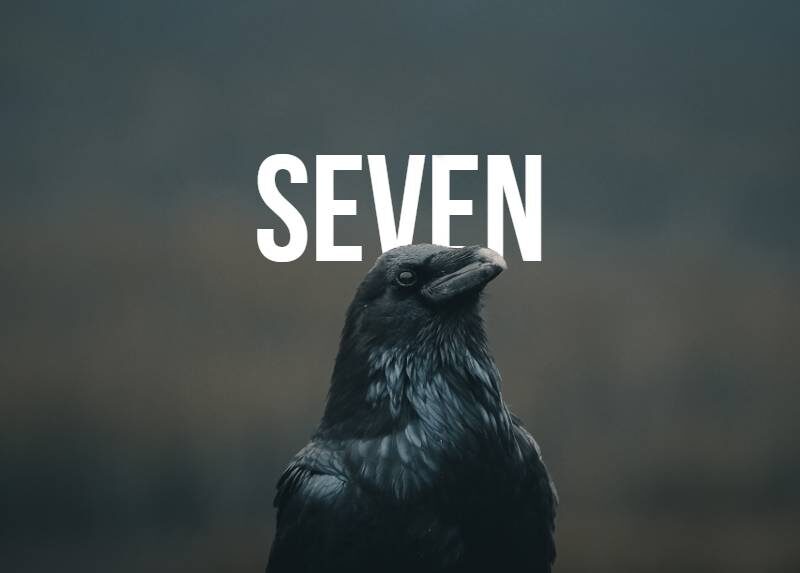 Detectives Somerset (Morgan Freeman) and Mills (Brad Pitt) have seven days to catch a serial killer who may be the devil himself.

What is Seven about?

Detective William Somerset is days from retiring, with newbie David Mills set to take over his role. When the pair investigate the death of an obese man, Somerset spots the signs of a serial killer – a murderer who means to recreate the seven deadly sin over seven days.

Seven is about two detectives – one young, one old – hunting a sadistic serial killer. Hell is central to the telling of this tale.

The film uses hellish imagery, it talks about sin, and it evokes and reinforces (mostly Christian) ideas about the afterlife.

It also features a very dark colour palette: muddy tones, blacks and browns. It’s difficult to see what’s going on – that goes for the audience as well as the detectives. We’re all finding our way in the dark.

Nowadays characters can glean what they need to know from the internet (a vast layman’s guide to all knowledge, if you like). Earlier films rely on libraries or bookshop owners to explain arcane knowledge and push the plot forward.

Take WarGames, an action drama about a teen who accidentally hacks a military computer. In the pre-digital era of the film, Matthew Broderick’s computer genius must still use a library to get the information he needs.

Detective Somerset is Seven’s librarian. His role is to steer Mills (and viewers) through the film, the literary connections, and hell itself.

Seven uses literature as a kind of shorthand:

Name-dropping these books is meant to give insight (or clues) to the mind of killer “Jonathan Doe” (Kevin Spacey). And they’ve become so influential in defining what hell is like that we don’t need to be familiar with them to understand what they signify in the movie: something wicked.

Not understanding (or not being able to see something clearly) often makes things seem more frightening. Not being familiar with these texts in detail – as most of us aren’t – works in the film’s favour; there’s more terror from what we don’t fully comprehend.

This is repeated in the pairing of Somerset and Mills. Somerset explains the literary connections to Mills (and viewers at the same time). Reading scares Mills – remember he calls Dante a “poetry writing faggot” – while Somerset is quite at home in libraries.

From Purgatorio to Paradise Lost

Seven borrows themes, images and ideas from Milton and Dante, mirroring their work to reinforce hellish concepts in the film. Some of this is deliberate, some coincidental (yet no less relevant for it).

The significance of the number seven

The film is shot through with sevens, a number which has significance in Christian theology, too – it’s considered the number of perfection / divinity. The question is, which of these does the film’s title speak to?

Are the murders staged for Somerset’s benefit?

John Doe reveals one murder a day over seven days. These coincide with Somerset’s last seven days on the force, and Mills’ first seven days. Doe even times one of his punishments – sloth – exactly one year advance.

Somerset suspects a serial killer before anyone else. More importantly, he alone has experience and literary knowledge to spot the pattern of the seven deadly sins.

He’s an outsider on the force and his colleagues resent him asking so many questions – yet it’s those very qualities that make him a match for Doe.

Somerset is a measured, patient man while Mills – in many ways his opposite – feeds on and reacts to every emotion.

This makes the younger detective a perfect foil to Doe’s final murder. Doe can count on Mills to execute him in retaliation, thereby completing the last deadly sin, wrath.

Meanwhile, Tracy’s scenes (and the pregnancy storyline) don’t add much to the plot. They’re only there to trigger Mills’ anger … which means Tracy exists only to get murdered. This is too often the fate of female characters in on-screen murder movies, whereas the action and insights go to the male characters.

Setting up the finale

Towards the end of Seven, Somerset and Mills are drinking in a bar and picking over the bones of the case so far.

Somerset tries to warn Mills that, “y’know, this isn’t gonna have a happy ending.” Mills replies he’ll be happy enough when they catch Doe – words that will prove bitterly ironic.

There’s also a nod to the ending and overarching themes of hell and ruined paradise.

“If we catch Doe and he turns out to be the Devil himself … that might live up to our expectations.”

If narratives always move towards resolution and satisfaction, this is Somerset’s way of confirming Doe is the Devil.

He also comes close to naming the city as a kind of limbo, a place where apathy rules:

“I just don’t think I can continue to live in a place that embraces and nurtures apathy as if it were a virtue.”

Yet, in the end, Somerset can’t escape from purgatory and enter paradise. Doe kills Tracy and destroys Mills. Somerset’s predictions come true, and he’s left holding yet more evidence that the world is a brutal place.

But perhaps his role isn’t to leave this ruined paradise. As the warrior angel, it’s to stay behind and fight for men’s souls – even if they don’t always deserve saving.

What’s in the box?

The film doesn’t reveal what’s in the box. Instead, it’s a storytelling device.

It’s tempting to assume it’s Tracy’s head, but the dimensions make this unlikely. John Doe says he’s taken Tracy’s head as a souvenir – but never says it’s in the box.

Somerset notices blood, but doesn’t say what he’s seen. He then tells the other cops to stay away, no matter what happens, because “John Doe has the upper hand”.

In line with the film’s themes of hell and Paradise Lost, the container is a Pandora’s Box. In Greek mythology, Pandora was the first woman (another Eve character). Like the Bible’s Eve, Pandora was tempted to taste forbidden knowledge. The box she opens unleashes hell: all human suffering and hardship.

Not only does this parallel the destruction of Eden, it encapsulates what lies ahead for Mills: another kind of living hell.

John Doe’s box may also literally be a box of chaos. Perhaps Somerset tells the other cops to stay away to protect themselves as much as to shield Mills.

So why doesn’t Somerset confirm – or lie – about what’s in the box?

Well, Mills reads lack of denial as confirmation that Tracy is dead. Given his role as angel-guide, Somerset can’t lie about what’s in the box because David must have free will to choose good over evil. David chooses to kill in wrath (two sins for the price of one) because with Tracy gone, paradise is meaningless.

So the box contains chaos, both real or metaphorical. And it’s a plot device that allows Mills to kill John Doe, bringing the film to a close.

Doe hypes up the twist to Mills and Somerset, saying “wanting people to listen, you can’t just tap them on the shoulder anymore. You have to hit them with a sledgehammer.” This describes Mills’ fate, but also the narrative’s end goal.

Mills dismisses Doe’s insanity but he’ll never forget this day. To a lesser extent, neither will viewers, who, as Doe predicts, will ‘puzzle over and study’ what he’s done for a long time. (This could also be a comment on the cult status we too often give killers.)

The film’s final act is quite the enigma. And, like the rest of the movie, suggests Doe is pulling the string with almost divine (or devilish) power.

“There he goes,” Doe announces when Somerset runs off to meet the messenger. And “here he comes,” he says when he returns. So has Doe planned every aspect of the endgame?

Doe knows the cops will be wearing wires. He knows there’ll be some kind of surveillance, so leads the chase to a no-fly zone. And he knows Somerset will leave him alone with Mills, thereby enabling the conclusion.

“I was chosen,” he explains in the car ride over. His sermon at this point – about how his victims deserved to die – is shocking, self-serving and delusional. And yet it’s an extreme version of Somerset’s own beliefs … that people are apathetic, and rarely innocent.

The world is a fine place

Ultimately Seven is Somerset’s movie. He’s the guide, the angel and the man of wisdom. And he’s the only ‘survivor’ at the end.

Bookish Somerset, who stands for wisdom, experience and knowledge, knows how to find the answers he needs. This is how he spots the work of a serial killer in the first place. In fact, the only other character that we know has a library card is … John Doe.

This is fitting if you see Somerset as an angel and Doe as the Devil; Lucifer is commonly said to have been an angel first, too.

Theirs is a nightmarish world in which God is absent and the Devil appears to triumph.

If that seems a bleak prospect, remember there’s always the possibility the film is just Somerset’s dream. We meet the two detectives in a pre-credits scene. That night Somerset sets his metronome and falls asleep – and then the movie begins.

Edge of Tomorrow (2014): time loops and circles of hell

Tender is the Flesh: the frailty and futility of being human

They do it with mirrors: The Others (2001) explained