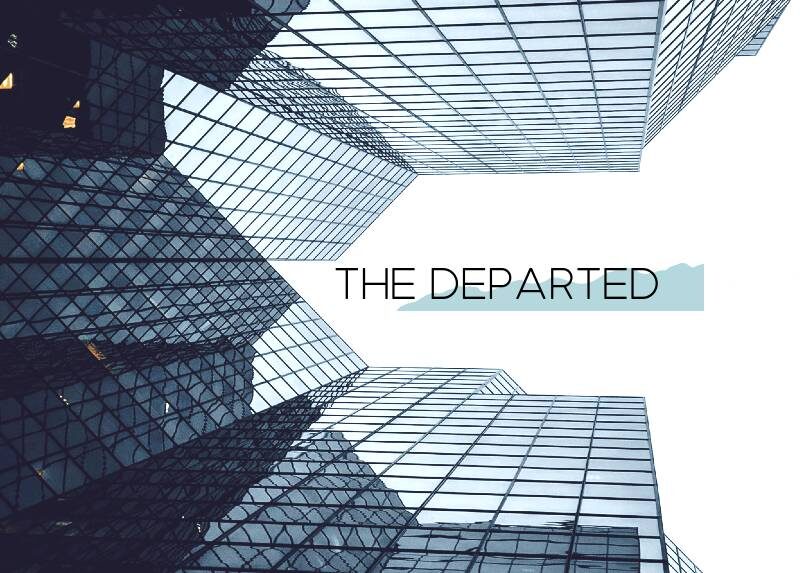 Scorsese’s cop thriller The Departed uses mirroring to hide a multitude of sins.

What is The Departed about?

As a safety measure, only two other cops know Costigan’s true identity. What no one knows is that Special Investigations (SI) officer Colin Sullivan (Matt Damon) is already working for Costello.

Costigan is the police ‘rat’ in Costello’s mob, while Sullivan is the mob’s rat in the State police department – and this is just the tip of the iceberg. All the characters sell each other out. Everyone’s on the take. No one can be trusted.

This article explains and interprets 2006 film The Departed, a remake of Hong Kong crime thriller Infernal Affairs. Reading past this point will reveal what happens in both movies.

Many narratives make use of opposites, i.e., characters and themes that are mirror images of each other. Think Jekyll and Hyde, Good Vs Evil, Cops & Robbers etc. The conflict between opposites is what makes drama (described in more detail in this essay about Jaws).

The Departed features similar opposites and mirror images but goes one step further: the link between them is often almost too close to call.

Costigan and Sullivan is the most obvious example of this. They’re so similar they could be two sides of the same coin/ character. Their paths mirror each other almost identically, but from opposing positions. In the film, both literally follow each other around in almost exactly the same way (so do McCauley and Hanna in Heat).

Similarly, there are two gangs in South Boston – the Irish American mobsters, and the State Police. If they were merely opposites it would be easy to differentiate between the two, yet both have their rats, corruption, loyalty and good intentions.

In both cases, rather than being straight opposites, they’re the same entity seen from different angles.

Why Costigan & Sullivan are so similar

Costigan and Sullivan are doubles. Both are young cops. Both work for the mob – but while Costigan does it to bring Costello to justice, Sullivan does it to protect him.

The two are even more similar at the start of the film. Both men are hungry for recognition. Both have similar backgrounds, too – working class families, dead parents.

Without knowing the finer details, they could pass for brothers (arguably they are brothers of fortune, with Costello the father figure whose approval they both need).

Costigan and Sullivan are mirror images of the same character.

Where their paths split is at the recruitment interviews. “Do you want to be a cop, or do you want to appear to be a cop?” Captain Queenan asks Costigan. This is the killer question, and one that forces the separation.

Sullivan, who has grown up under Costello, knows how to lie (he even brags about this later in the movie). He knows how to appear to be a cop far better than Costigan does, despite being dirty – and uses his fancy apartment and ‘doctor’ girlfriend as part of the ruse.

While Sullivan is welcomed into the SI unit, Costigan (with his family’s criminal connections) is immediately shunted into undercover work. Thus Queenan’s ‘prophesy’ comes true: Costigan becomes a true cop, one doing the work without the badge, gun and recognition.

Costello (Jack Nicholson) leads the Irish American mob. He’s not a sociopathic killer, but he is a very strategic one, seeing death as a necessary evil to his job and desires. “Non serviam”, he tells a young Sullivan – I will not serve – quoting Irish author James Joyce (though the quote is also attributed to Lucifer).

Costello is an individualist, and clearly anti-Church. His opposite is Captain Queenan (Martin Sheen), a known Catholic who leads the undercover police department.

Both are also father figures, yet while Queenan provokes loyalty and courage, Costello inspires fear and betrayal.

Between them they personify good and evil, though even here the boundaries are blurred. Costello quotes the devil and will have nothing to do with God or the Church. That said, it’s Queenan who, like the devil, ‘falls from heaven’ (literally, when he’s thrown from the roof).

Costello, though, is indisputably the rat king, an almost Shakespearean villain who creates a foul world in his own image.

He nods at this when he misquotes Henry IV, Part 2: “Uneasy lies the head that wears a crown” (Costello actually says “Heavy lies the crown”).

But if Costello sees himself as a Shakespearan king, he’s more like King Lear, the mad monarch who challenges his children to prove they love him.

This is the tension that underpins The Departed: who ‘loves’ Costello more, and who will prove more faithful – Costigan or Sullivan?

It’s a futile game, because Costello is feeding information to the FBI himself.

Faced with the ultimate double-cross, Sullivan calls the game out for the lie that it is. He then implies that for all Costello’s sleeping around, he can’t have children.

Again, there’s an element of doubling here: if we’re to believe Madolyn’s speech earlier in the film, Sullivan has this same problem.

Police psychiatrist Madden (Vera Farmiga) is another bridge that connects Costigan and Sullivan. Both men unwittingly share a ‘father’ in Costello, and a ‘wife’ in Madden.

Madden quite literally betrays Sullivan by cheating on him. It’s also likely that her unborn child is Costigan’s but, because this detail is never spelled out, it’s another connection between the men – both ‘share’ a son.

Costigan and Sullivan are (thematically) the same person, so of course they share a father, wife and child. Madden even represents another instance of doubling in her name – Madolyn Madden (there’s also Costigan and Costello).

Because of the way the film ends, it’s not clear whether Madden also betrays Costigan. He leaves a file of evidence with her, to be opened if anything happens to him. If she does as asked, however, it would mean Sullivan would be arrested – yet this isn’t how the film ends.

There’s a suggestion that others get wise to Sullivan’s true nature instead.

When Sullivan returns to his apartment after the funeral, even the old women avoid him, as though they know he’s dirty (notice too the carpets near the lift, which feature big red X patterns, as though X marks the spot). Shortly after that, Sullivan is dead.

Delahunt (Mark Rolston) may be another double for Costigan. He’s part of Costello’s mob, and memorably plays a ‘guess the cop’ game which may well be a diversion.

The game says that anyone who ignores the gang is a cop. That puts Costigan under the spotlight when he stumbles out of Costello’s bar yet protects him at the same time – because he’s clearly far too interested in and involved with Costello.

After his death, TV reports claim Delahunt is the undercover cop – though Costello immediately calls this out as a police strategy.

But there is a possibility that Delahunt is an undercover cop. Before he dies, he reveals that he knows Billy is the rat … and yet doesn’t give him away.

It’s easy to assume this is because he’s a second undercover cop. This would tally with the fact that Costello also puts two rats in the SI unit – a fact that even Sullivan is blind to until the end.

Foul-mouthed Dignam (Mark Wahlberg) is the ‘bad cop’ in a good cop, bad cop pairing with Captain Queenan (good cop, bad cop is another type of doubling, one meant to disorientate and catch out criminals).

Queenan and Dignam are opposites in other ways, too: old Vs young, and soft-spoken Vs foul mouthed.

Dignam is also a double for Sullivan, with both men swearing allegiance to a father figure.

For Sullivan, this is Costello; for Dignam, it’s Queenan. Dignam’s final act of vengeance is most likely powered by this relationship: it’s payback for patricide.

The Departed features one double cross after another. Ultimately, almost all the characters choose to wear masks of morality and loyalty in public, and pursue their own desires in private.

Moreover, in the world that Frank Costello has created – in which a man should take whatever he wants just because he can – there’s no escape from corruption and death. That’s what happens when everyone is primed to sell out their closest friends and family to get what they want.

So it’s no surprise Costigan is killed just before he’s home-free. This hits hard because Billy is the film’s most likeable or heroic character. He’s also the only rat with a more noble end in mind (justice).

This means the end of the film can be read in two ways. Firstly, Dignam executes Sullivan as a final payback (assuming he’s not a mole, too). Presumably someone else will come after Dignam in turn.

Some viewers may have hated the film’s final shot – a rat walking across Sullivan’s balcony – yet it’s entirely in keeping with everything the film is about.

That closing shot is a reminder that, no matter how much the police or the mob attempt to clean up the city or take back control, there’s always one more rat out there.

The Departed (2006), directed by Martin Scorsese.

So You Want to be a Producer: a warts ‘n’ all Hollywood memoir