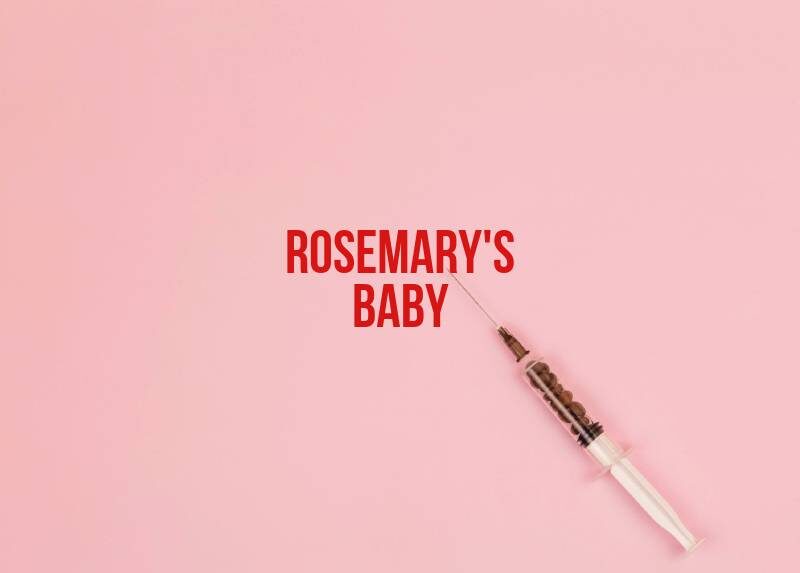 This classic adaptation of horror novel Rosemary’s Baby is a modern metropolitan gothic story with a trump card of sensational excess.

What is Rosemary’s Baby about?

Guy and Rosemary Woodhouse are excited to move into The Bramford, an ornate New York apartment block with a notorious history. The eccentric old couple next door seem friendly enough – but when Rosemary falls pregnant she starts to suspect their interest in her unborn child.

At the heart of Rosemary’s Baby lies an urban gothic horror story, complete with foreboding house, sickly housewife and the dread of the unknown. Of course, the whole thing reeks of isolation and paranoia – this despite its cramped New York city backdrop.

As with other gothic tales, this means protagonist Rosemary Woodhouse (Mia Farrow) is in for a rough ride.

Ultimately Rosemary’s Baby trumps its fantastical gothic origins with a true corker of excess. Rosemary Woodhouse has been chosen to give Satan a son – she just doesn’t know it yet.

Rosemary’s gaslighting – her psychological manipulation – is an interesting phenomenon. Like 1997’s The Game, it takes almost an entire city to pull it off. Indeed, as the book Hutch gives her proclaims, they’re All Of Them Witches: it’s a massive clue to what Rosemary doesn’t yet see.

Husband Guy (John Cassavetes) is first to fall for their neighbours’ charms. He’s a struggling actor … at least, until the Castevets intervene. By the end of the film Rosemary deduces they’ve bought his loyalty through career success. Together, the trio use black magic to remove anyone who stands in their way, including Guy’s acting rival, and Rosemary’s friend Hutch.

Roman and Minnie Castevet run the Bramford witches coven to serve Satan. They procure Rosemary through Guy to give Satan an Earthly son – a kind of inverse Jesus birth story, and/or a modern re-telling of several Greek myths.

The Castevets and Guy collude to keep Rosemary in the dark, using a combination of drugs and lies to stop her grasping the truth. For instance, Minnie whips up a batch of laced chocolate mousse that Guy manipulates Rosemary into eating.

The conspiracy stretches much further, however. Everyone in the building appears to be in on it, including the lift attendant. The obstetrician they make Rosemary see is part of the coven. And when she finally escapes to her own doctor, he’s in on it, too.

The deviousness of the strategy is its scale. It isolates Rosemary from her friends, then separates her from her own intuition. She even lives with pain for months because she submits to their wisdom. By the time she realises something isn’t right, she’s on her own.

The coven keeps Rosemary on the verge of mental breakdown to keep her pliable. This also mimics the stages and self-doubt of mental illness. She’s no threat if she can’t tell truth from reality – and if she can’t credibly convince others what she’s seen.

The path to knowledge

Here, Rosemary’s friend Hutch is the conduit to knowledge, both for her and the audience. Their conversation at the start of the movie reveals The Bramford’s dark history, including accusations of witchcraft and cannibalism. This sets the stage – and our appetites – for what’s to come.

The book Hutch bequeaths Rosemary, All Of Them Witches, is another gateway into hidden knowledge. It explains how covens work and, importantly, how they rely on herbs like tannis root to drug and manipulate others.

Another kind of wordy pursuit helps Rosemary fill in the rest of the blanks: she uses Scrabble tiles to unscramble Roman Castevet’s true name. It’s an anagram for Steven Marcato, and he’s the son of Adrian Marcato, founder of the original coven.

So knowledge in different ways is potent armour for Rosemary Woodhouse. No wonder Satanists and society are in cahoots to keep her in the dark throughout the film.

Minnie Castevet’s use of tannis root and other herbs is ambiguous at first. It harks back to witches’ gardens and spells, but also of feminine knowledge – of ‘grandmother knows best’. It also invokes a far older prejudice against traditional female knowledge that pushed healing out of the reach of women and into the hands of male doctors.

There’s also an interesting tension in the movie between learned knowledge and experience. Consider how Rosemary is so young (more of that below). Even Guy is older and more mature, while the Castevets seem positively ancient in comparison.

Finally even Rosemary – another herb, incidentally – has enough. She arranges a party for friends of her own age, in a bid to carve out her own power and authority.

See The Nanny for more about how horror films use old age as a shortcut to terror.

Whether or not Mia Farrow was Polanski’s first choice for the role of Rosemary Woodhouse, her presence brings a palpable fragility to the part.

Rosemary Woodhouse on-screen is sparrow-like and almost androgynous. With her baby doll dresses and oversized suitcase, she looks at times more like a child playing dress-up. In fact she is, and over the course of the movie must grow up and fashion her own ideas about motherhood and maturity (see also Poltergeist).

Compare also Kubrick’s casting of Wendy in The Shining, and the pairing of much older husbands in both films.

This isn’t the only way Rosemary is babyfied. She’s been conditioned to accept male influence as somehow sacred: Guy and Dr Sapirstein even dictate if she’s allowed to read (a core part in gaslighting her).

The Castevets also take Rosemary under their wing as a surrogate daughter, though of course she isn’t the first. When former addict Terry doesn’t work out as Satan’s love interest the Castevets bump her off and move in on Rosemary.

Some of these fictional concepts reflect the social norms of the time, too. For instance, the idea that women shouldn’t look beyond marriage, home-making and babies for fulfilment. The outside world, careers and self-sufficiency (i.e., the knowledge from book reading) threaten that dominance – and must be ground out.

In that sense, Rosemary isn’t the first to be gaslit by medical science, which still too often writes women’s voices and concerns off as hysteria.

Yet while Rosemary’s Baby gets good mileage from its hell-themed horror, its real unease lies in everyday tragedy (see also Get Out). It’s in the way Rosemary is consistently undermined, but especially in the way she’s groomed to accept the unspeakable abuse she experiences.

The plot of Rosemary’s Baby shifts steadily and inexorably into the unknown and the unnatural. Notably, it shifts ancient fears about demons to a modern, metropolitan setting, yet loses none of the dread.

In the film Roman Castevet and various newspapers proclaim God is dead, while the Pope is reduced to a media-savvy celebrity. Sure it’s a bold new secular world, but one cut loose from the certainty and comfort of faith. This is partly where Rosemary’s dread comes from (she’s a lapsed Catholic).

For all its hellish inferences, however, the film’s true unease comes from its treatment of Rosemary Woodhouse.

Husband Guy sets-up Rosemary to be raped while semi-conscious so it’s almost neither here nor there if it’s by Satan himself.

The next morning Guy claims he initiated sex while she was asleep. Rape, in other words. It’s even possible he plays an active part in her rape for real.

Rosemary, conditioned to believe she has her husband’s loyalty, writes-off Guy’s behaviour: at best, she can express disappointment. Keep in mind that Nebraska was the first US state to outlaw marital rape and incredibly that was only in 1975.

The film’s big reveal is that witches like the Bramford coven are literally creating hell on Earth through their worship and enabling of Satan. But Rosemary already lives in a kind of socially condoned hell. She has a fabulous apartment and stylish clothes but has no right to refuse her husband’s sexual advances (awake or not).

Neither does she have agency over her body as a breeding ground. Like the handmaids of Margaret Atwood’s novel, Rosemary is reduced to a carrying case.

Eventually Rosemary suspects the coven of doing “unspeakable” things. But the real unspeakable thing is not being able to recognise or say her husband has raped her – or to expect any protection from the law.

Polanski’s film adaptation runs very close to Levin’s 1967 novel; many of the book’s scenes and dialogue are fairly hoisted into place. However, couple of things stand out to a greater degree in the book.

Motherhood and the film’s ending

True to the story’s gothic patterns, Rosemary experiences terror because of her gendered position. Never mind the devil: she may have access to modern medicine but like any Victorian heroine motherhood alone threatens to kill her.

The pregnancy is tough on Rosemary, with the baby seemingly consuming her from the inside. This is a creepy reversal of Hutch’s story about the old aunts who munch on little children, incidentally.

The film’s ending is also Rosemary’s final test. Can she love her child despite knowing who and what he really is? For all his terror, Rosemary accepts her son just as he is because unquestioning devotion is what motherhood is all about. Indeed, the film’s larger message (or interrogation) is that motherhood is what being a woman is all about (see also Levin’s The Stepford Wives).

So Rosemary, who spends the film running away from fear, runs into it and accepts it as normal – and you could call that another type of gaslighting.