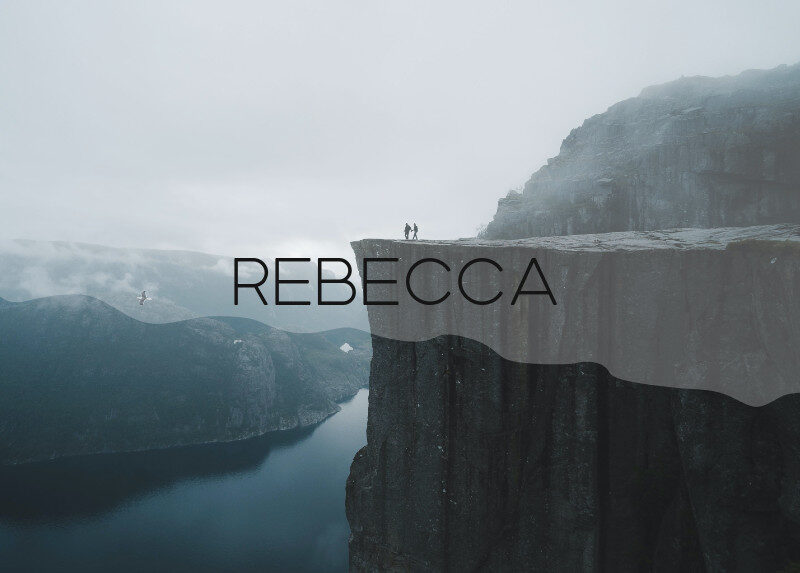 The narrator of Daphne du Maurier’s 1938 Gothic novel has no name. Consequently, neither does the protagonist of Alfred Hitchcock’s 1940 cinema adaptation. Instead, both book and film bear the name of the dead woman whose presence haunts them: Rebecca.

The story begins as the narrator (Joan Fontaine) dreams of Manderley, and reveals how she came to live there as the second Mrs de Winter.

Maxim bears a striking resemblance to Jane Eyre’s Mr Rochester: both are imperious, moody creatures who rule over those who love them. Both harbour dark secrets about their dead wives – women who disrupt the text in defiance of being written out of it.

Having lost one wife to drowning, Maxim finds solace in her exact opposite: the quiet-as-a-mouse lady’s companion. One whirlwind romance later and he whisks her off to Manderley, the mansion that overwhelms and frightens her.

Maxim’s wealth and breeding scares her, too, but her biggest terror comes in the shape of housekeeper Mrs Danvers (Judith Anderson). Danvers kept house for Rebecca … and still keeps house for Rebecca. In fact, one way or another, they’re all in thrall Maxim’s beautiful first wife.

Mrs Danvers – “Danny” – uses her devotion to torment the new Mrs de Winter. Inevitably, the story becomes a three-way match. Each woman wears the identity of “Mrs de Winter” … but only one can be left standing.

The character we know as Mrs de Winter is the least deserving of the title. Her struggle in the story is to have a voice, but she only half succeeds (even her name belongs to a dead woman).

Mrs de Winter is frightened of life long before Manderley and Mrs Danvers. They’re a rite of passage, representing the things that scare her most of all: maturity and independence.

Film plots almost always hinge on character development. Through conflict, a protagonist sheds their old life and habits, and emerges – like the butterfly – a very different creature.

This doesn’t quite happen in Rebecca. Here, the frightened lady’s companion never fully blooms. While her love for Maxim eventually gives her some strength of mind, she never truly casts off her social awkwardness.

Rebecca may be the dead wife, but the second Mrs de Winter is the ghost: a pale imitation of an adult woman with a will of her own Even when she does eventually assert herself, it blows up in her face quite spectacularly.

After discovering Danny’s shrine to Rebecca’s spirit – and underwear – Mrs de Winter demands her predecessor’s belongings are thrown out.

It’s an impressive show, yet we can guess Danny’s revenge long before it lands the evening of the masked ball. Under her guidance, Mrs de Winter chooses the same costume Rebecca wore, sending Maxim into his customary rage.

The costume is a potent symbol of the narrator’s quest to become Mrs de Winter on her own terms. Other characters oppose this for their own reasons: Danny, Jack and Frank Crawley because they love Rebecca, Maxim because he hates her.

In the end Manderley must burn, and so must Mrs Danvers, to make room for a new Mrs de Winters.

Manderley belongs to Danny as much as Rebecca; the women came to the house at the same time. Over time, Danny’s care tips into a twisted version of duty (see also The Nanny). She watches Rebecca bathe, and waits up for her after parties.

When Danny performs these memories for Mrs de Winter, the sexual love that underpins the fascination is clear (see also Hitchcock’s use of gay codes in Rope). Note how she shows off her mistresses’ underwear, and lovingly strokes a fur … coat.

After Rebecca dies, Danny preserves Manderley in her image. She roams the West Wing, keeping Rebecca’s spirit alive by being her. Danny is also a more explicit replacement in the way she manages Manderley in Maxim’s absence.

Danny grasps there can only be one Mrs de Winter at a time. With Rebecca gone, that’s her position. Her reaction to Maxim’s new bride starts out as petty jealousy, but veers towards murderous when she grooms her for suicide.

Both women ‘inherit’ the role of Mrs de Winter and, consequently, a boost up the social ladder (in Danny’s case this is still bounded by her role as a servant).

Ultimately, Danny’s role in the story is as an agent of revenge … but against whom?

She burns Manderley like a funeral pyre, throwing herself onto it so that no one else may take her place or tarnish her love for Rebecca. Yet at the same time, her revenge is partly against Rebecca for witholding the most precious intimacy: the truth about her cancer.

More obviously, it’s vengeance against Maxim and Mrs de Winter – yet even this is ambiguous. Danny engineers the destruction that wipes the slate clean, freeing them all from Rebecca’s devilish intent.

Rebecca, then, is the last piece of the puzzle. Her name and presence dominate the story yet, like Mrs de Winter, she never fully exists. The narrator lacks a name … Rebecca lacks a body.

Instead, like the murdered woman in Muriel Spark’s The Driver’s Seat, she exists in the memories of others – and her character shifts on each telling.

As a drowned woman, Rebecca is a tragic figure; her loss even appears to drive Maxim to the verge of suicide. Later we encounter her as a beguiling creature, everything Mrs de Winter isn’t: beautiful, confident, captivating.

The reality lies between these extremes. Maxim’s brother-in-law hints at it when he presumes Mrs de Winter is [another] show girl.

Eventually Maxim unveils the ‘true’ Rebecca: a hateful, manipulative woman who trapped him in false marriage, then tormented him.

In film and fiction, women who don’t abide by social and sexual codes are punished for their transgressions (see also The Foreigner). Rebecca doesn’t just subvert these expectations; she openly ridicules them.

Once married, she reveals the sham of her good character – it’s so spicy, Maxim can’t even say it. After cheating on him, she taunts him with her pregnancy. This is to be his life sentence: to raise another man’s child, and bequeath Manderley to them.

This Rebecca is a devil. Even the boat house is her love nest (the real reason Maxim can’t stand it).

But the impact and intention of Maxim’s revelation is this: to convince us Rebecca deserved to die. Maxim’s story is the narrative’s moral loophole, and it excuses monstrous male behaviour.

While his wives share one name between them, Maxim hogs at least three all to himself.

Yet for all his names – and money – Maxim is hard to like. He’s moody, self-involved, and treats his bride like an employee. If Danny is a malevolent force, Maxim is equally emotionally manipulative.

None of this is a surprise. After all, the story depends on us despising Maxim’s uncontrollable temper … then excusing him for it.

Maxim doesn’t murder Rebecca. He strikes her in anger and, in falling, she hits her head. The unspoken implication is that she murders herself.

Maxim puts the body on a boat, sinks it, then later, identifies yet another unnamed woman in her place. Honestly, there are so many anonymous women it’s a wonder the whole story doesn’t sink. Anyhoo.

When a storm uncovers the body, Maxim reveals what really happened. He now takes over as protagonist, one on the verge of being indicted for murder. Luckily, there’s one more twist.

Rebecca wasn’t pregnant, she was dying (often the same thing in cinema). Her cancer lets Maxim off the hook because it’s motive for suicide. And just like that, the inquest is over.

Now the story takes its last, dubious loop. We’re led to believe Rebecca wanted to die at Maxim’s hand. She turns his temper into a gun, then pulls the trigger. Once again, she murders herself – and wants Maxim to take the blame.

The final reveal puts romance back on track. Maxim and Mrs de Winter are finally free to love – and free from Mrs Danvers. But the fairytale ending relies on a series of twists that paint Rebecca as a woman unworthy of life and deserving of violence.

In the end, this story seems to say … she was asking for it.

The Departed (2006) explained: dirty rats and the ‘double’ theory