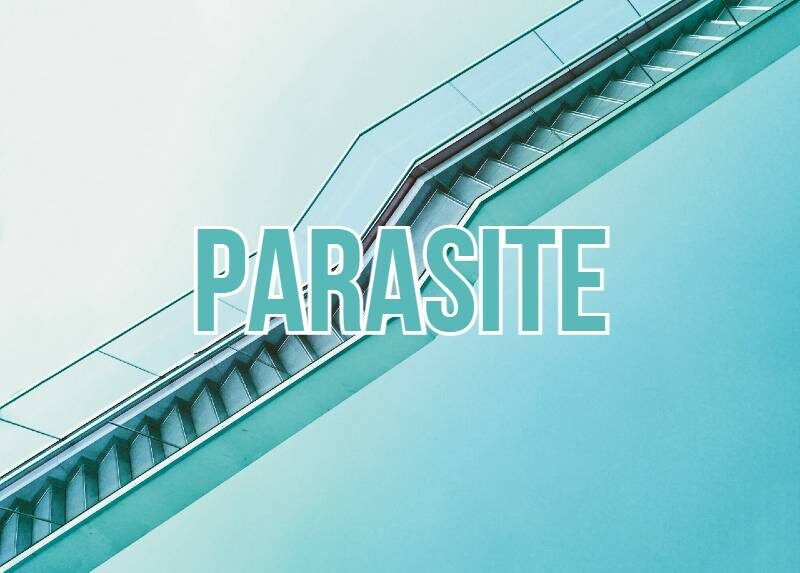 A down-on-their-luck family take a gamble on fraud in 2019 film Parasite. But rather than lifting them out of poverty, it becomes a nightmarish ride to the bottom.

What is Parasite about?

The Kim family is barely surviving. They share a tiny, basement apartment and work for peanuts: life is hard. Then a family friend suggests eldest son Ki-woo (Woo-sik Choi) takes his place as English tutor for the wealthy Park family.

The job involves a simple deception – convincing the Parks that Ki-woo is a college student. But what begins as a white lie snowballs into an elaborate and increasingly dangerous pretence.

Parasite’s main theme is the social gap. There’s a huge gulf between being poor and being rich. When you’re poor, it’s hard to cross over to the other side. When you’re rich, there are barriers you can put in place to protect yourself from poor people.

This hierarchy is there in the film’s opening scene. The Kim’s apartment is below ground level, with a window that looks up at the street. The rest of the world looks down on the Kim family – drunk people even urinate on them.

The family’s aspiration is a universal one: moving up in life. At the start of the film, they’re at the bottom of society, and literally at the bottom of their town. Infiltrating the Parks’ home is one way to climb the social ladder.

This is most apparent when things go wrong after a run-in with the Parks’ dodgy housekeeper Moon-gwang (Lee Jung Eun).

Leaving their mother behind to carry on the deception, the others flee to their original apartment. The journey back involves tumbling and slipping down countless stairways – as though the Park home is up in the heavens, and they’re running back to hell.

When they get there, a flood has destroyed their home and all their belongings. As if to hammer home how much trouble they’re now in, sewage spurts back up and into the apartment: they’re literally in the shit.

Of course, being so poor is its own punishment – having so little to lose, they’re also most likely to lose everything. The flood may illustrate this, but in fact the Kims are already financially drowning at the start of the film.

The basement as metaphor

Ki-woo declares several things to be a metaphor (most strikingly, the ornamental boulder that later becomes a weapon). The mother of all metaphors, however, is the basement. It represents secrets, hidden selves, and the way the poorest are expected to live underground or out of sight, like a sub-class.

The Kim family already live in a basement apartment. Through their deception, they temporarily get to enjoy life at the same level as the Parks.

They think the Park house is their lucky break, but events quickly pull them back … into a basement. The secret door they discover is no doorway to Narnia. It’s another kind of jail – one that’s impossible to leave. The metaphor reflects social invisibility, the same way Joker and Candyman do.

This invisibility traps the Kims in poverty, without sympathy or respect from others. But because they’re poor, they’re un-seen in other ways, too. For instance, when they’re hiding just feet away from Mr and Mrs Park.

The Parks don’t even notice Chung-sook’s second basement home within their home either, because they can’t ‘see’ poverty, and have excused themselves from their moral and social duty.

Early in the film, Mrs Park is said to be gullible. In fact, the Parks are so wrapped up in the fantasy of being wealthy, successful people that they can’t imagine anything else.

As for father Ki-taek, there’s just no escape from basement life and mentality. He ends the film in a strikingly similar location to the opening scenes – though of course now things are far worse.

The second film hiding in Parasite

Ki-jung has Photoshop skills, Ki-taek is an experienced driver, Ki-woo is a decent English tutor. They each have abilities, but are locked out by the social hierarchy. Experience doesn’t count for much without the official paperwork, or the connections that Mrs Park is so mindful of.

The Kims get around this with fraud – by crafting a whole performance. This becomes a ‘film within the film’ (like Hamlet’s play with a play). They each build a role for themselves with detailed backstory. They have costumes. And they rehearse the scenes, with Ki-woo ‘directing’ the other players.

The Parks, meanwhile, are like an audience. They believe what they see, and only want the performance, whatever the cost to the players.

The problem with pretence is that most of us can’t keep it up forever: reality finds a way to disrupt the artifice.

The Kims find themselves in the lap of luxury, yet quickly revert to their lazy and messy selves. They think they can hide who they are behind the performance, but the Parks can still smell them.

Similarly, the deception Moon-gwang thinks she can hide away in the basement (her husband) breaks free and comes bursting into the sunlight.

Whether it’s stairs or basements or the contrast of the two homes – one squalid, one exquisitely crafted – the film continually returns to the social hierarchy.

Everyone has a place in life, sometimes not of our choosing. And much as we celebrate the self-improvement or self-made myth, climbing out of poverty is much easier when someone (and society) lends a hand.

It’s hard to commend those who live at others’ expense – but it’s hard to condemn them, either. The truth is that society colludes to keep people trapped in poverty.

Meanwhile the very richest members of society enjoy their privilege by exploiting the work (and sometimes dignity) of those below them.

Parasite shows that, as in history, sometimes the most abused members of society have reason to bite back.