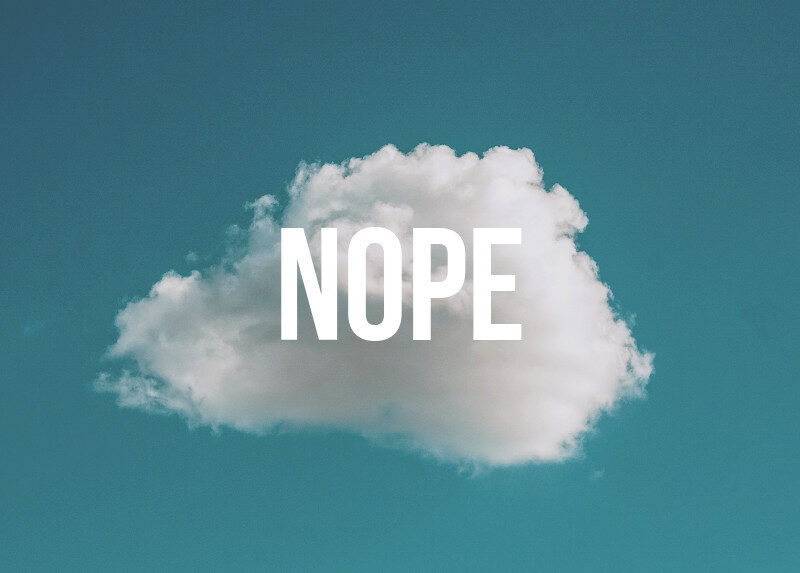 What is Nope about?

But although siblings, they’re like chalk and cheese. OJ in particular can’t make peace with the weird circumstances of his dad’s death.

Then one night he spots something in the sky that explains everything – and it’s out of this world.

The very first line of dialogue in Nope is Haywood Snr telling OJ to keep his eyes out of the clouds. Stay grounded to be successful, in other words, and don’t go chasing foolishness. It’s good advice … and yet from this point on we’re all glued to the skies.

Moments after dispensing his advice, Haywood is dead. The authorities say the coin that split his skull fell from a passing plane. “Each cloud contains pennies from heaven,” you could say – a lyric that particularly resonates with the story to come. Of course, unlike the song, it’s hard to put a rosy spin on a freak accident.

The authorities are half right to blame plane debris. When the siblings first spot the alien craft, they assume it’s a UFO. Knowing they can get big cash for photo evidence of aliens, they set about trying to catch it on camera.

Then OJ realises this is no space ship. It’s a living organism that hoovers up people and animals, and expels anything indigestible.

That ‘excrement’, essentially, includes pennies, keys and whatever else the victims are carrying when they’re sucked up. And it comes out with enough force to pulverise anything standing in the way.

As for the terrible screeching noises as the UFO passes overhead? The victim’s screams as they’re eaten alive.

It’s not surprising OJ figures it out first. His affinity is with horses, not people. When he guides Emerald and Angel away from the UFO, it’s with the same noises and gestures he uses with his animals.

In fact, he doesn’t make eye contact with anyone, let alone the alien craft. His journey in this film is at least partly from grieving loner to cowboy hero. We’ll get to that.

In any case, OJ realises the UFO is like a wild animal that’s found an abundant food source. That’s why it’s been looming over the valley for the past six months – hiding behind clouds, no less.

This is a neat expansion of typical UFO treatment in fiction. The craft isn’t a carrying case for terrible beings, but the terrible being itself. And despite its extra terrestrial origin, the alien carves out its territory as doggedly as any Earth creature.

There are similarities with the alien craft of War of the Worlds, too. They too suck up humans and spew out blood – with similarly terrifying noises.

Once he identifies the alien craft as a creature, OJ is in his element. He figures:

He gives it a name, too: Jean Jacket. Like the horses on the ranch – and a rogue chimpanzee – the name appears on-screen as one of the film’s chapter titles. The mechanism subtly underlines the connection between the animals, and their role to the story.

Nope begins with a disorienting flash from a seemingly unconnected storyline. There’s an eerily silent film studio, the remnants of carnage, and a blood-stained chimp. The action then switches to the Haywood ranch, leaving a ton of unresolved tension.

Once OJ and Emerald meet former child star Ricky, now owner of a sorry looking theme park, the story rolls out in bits and pieces.

Chimpanzee Gordy and Ricky starred in a TV show back in the 1990s. Then a helium balloon bursts during filming one day. The noise shocks Gordy back to his unpredictable animal behaviours – as opposed to the cute domestic behaviours humans impose on him.

During the fit that follows, he attacks – and tries to eat – his co-stars. Never work with children or animals, right?

Though we don’t yet know the context, Nope clues us in about what happened to Gordy when OJ brings a horse to a film studio. Seeing its reflection (i.e., eye contact), the horse rears up, causing chaos.

OJ similarly warns both Emerald and Angel to hold back on sudden or loud noises. Keep in mind that Emerald’s raucous music causes Ghost to bolt, too … rather neatly, this is how OJ discovers the alien craft in the first place.

The significance of the monkey

The fallout from the Gordy story plays out in a couple of ways.

Firstly, responses to stimuli connect Gordy, the horses and the UFO as living creatures. Moreover, they’re wild beings that humans try to control. This is most successful when humans meet the animals respectfully, on their terms (i.e., no eye contact, no loud noises).

Secondly, it paints a rather grim picture of Ricky – or perhaps of the experience of child actors in general.

As a grown man Ricky is still trying to make a living from his stunted studio career. Like his museum, he’s stuck in the past. So too is the disfigured co-star who’s still part of his act.

More intriguing is that child Ricky, despite being right in the middle of the carnage, appears to calmly go back to claim his colleague’s shoe. It now has pride of place in his museum, making it quite the horror show. Or is that horror shoe? Ahem.

Warranted or not, Ricky gets his comeuppance. When the UFO unexpectedly turns on the audience at the theme park (including Ricky, his wife and kids), it’s a replay of the Gordy story on a far bigger scale.

The symbolism of the Black jockey

It’s almost always the case that characters get their just rewards; it’s what brings balance and resolution to stories, and how we make sense of them. Thus Ricky (who, by the way, has been sacrificing OJ’s horses for the past six months as part of his new act) gets his comeuppance.

Likewise, taciturn OJ is willing to die for his sister. The story rewards him with survival snatched from the jaws of death. This doesn’t always work in real life, of course, but the optimism and sense of justice are what make fiction so potent.

Emerald’s closure is more complicated. Her father doesn’t involve her in the business … presumably because she’s not a boy. Nope redresses this by making her ‘director’ of the movie they’re trying to shoot. She gets the final cut; it’s her photography that captures the alien before it dies.

Nope gives us another kind of comeuppance: the acknowledgement of Black talent, labour and rights erased from historical record.

This is the significance of the unknown jockey. It’s a true story of mixed provenance according to Newsweek, but Emerald explains its implications to the real world and film universe. She says this Black rider is the world’s first movie star – and he’s her ancestor.

Her point is that Black people are barred from work they create, even while white bosses take credit – and from there forge empires and legacies. At the same time, it’s a business statement: the Haywoods have already earned a place at the table.

The image of the Black jockey eventually leaps into the movie. In fact, we see the poster again on Emerald’s wall just before OJ steps up into the role for real.

Because the UFO uses cloud cover as camouflage, it’s invisible from the ground. But there’s a giveaway: whenever it’s overhead, all electrical equipment dies.

By spreading battery-powered inflatable figures across the ranch, OJ builds his own proximity sensor. They deflate whenever the UFO is nearby.

Similarly, cars are useless against aliens. Instead, OJ reclaims the true meaning of horsepower: horses, not car engines.

This is where image of the Black jockey merges with cowboys and westerns. Note too that the final image in the movie is of OJ astride his horse in the Wild West themed Jupiter Park. It upends the myth of the white knight that’s ubiquitous in storytelling.

And while westerns have played a role in crafting the idea of America, the image says something striking about forging new stories. It corrects historical erasure, too. Semantically and professionally, the first cowboys were in fact Black. OJ as a Black cowboy isn’t revisionism, but reclamation.

New tech Vs the old ways

Incidentally, horse power – along with Antlers Holst and his analogue, hand-powered camera – revisits a common theme in horror. From Poltergeist to The Ring, film-makers are repeatedly drawn to the clash of new tech and old ways.

In Nope, we see this in the shortcomings of digital cameras and cellphones. At the same time, it’s commentary about tabloid press, and of our addiction to capturing social media moments before we’ve even experienced them.

Kites and ribbons are the final piece of the puzzle: they clog up the alien’s digestive tract and airway, again outdoing any digital or high-tech intervention. When the UFO comes for the last woman standing, Emerald, she releases a massive inflatable, causing the alien to explode.

And when she finally captures the impossible shot, it’s on an analogue novelty camera built into a well.

Storytelling and spectacle in Nope

Let’s end with the film’s beginning. Nope’s title card contains a biblical quote. After all, could it truly be horror without a cheeky nod to religion?

“I will pelt you with filth, I will treat you with contempt and make you a spectacle.”

It’s tempting to read this as a commentary on film-making and the storytelling process. And it’s particularly poignant as far as Gordy and Ricky go. Both are exploited in the name of entertainment.

No matter how much they take contempt and turn out spectacle, child actors can have brutally short shelf lives. They grow up … and are pushed off screen.

The disfigured co-star illustrates this in an extreme way, but Ricky is trapped by the same system. Years later, he’s still reliving his trauma … and trying to profit from it.

Nope is also a movie about making movies. Most of the plot is about setting up cameras, finding a location and pinning down the star turn.

Everyone’s in pursuit of the impossible shot. Antlers Holst is so driven by the possibility that he sacrifices his life for it. The contradiction is that the impossible shot is the unimaginable, or perhaps the one that can’t be shared. It’s very much the opposite of social media or clickbait media (i.e., the motorcycle reporter).

In the end, though, the quote reflects the functions of storytelling.

Hayward Snr’s death is a plot driver: it kick-starts the action. But everything that follows is also a coping mechanism for grief. Losing loved ones makes no sense. It’s soothing to find explanations and reasons for death – no matter how far-fetched.

Ultimately, a story is the writer’s lucid dream. Peele punishes his characters; he puts them into all kinds of literal and figurative shit. What’s left is pure spectacle.