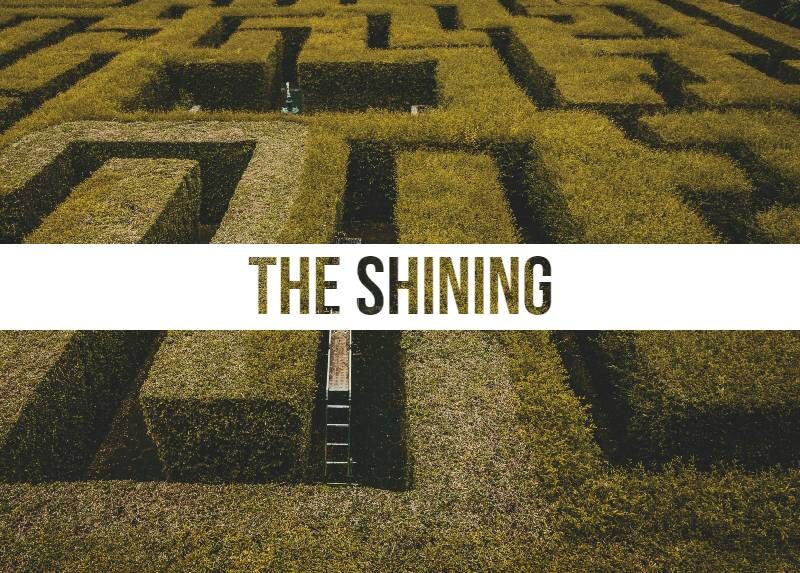 Getting down ‘n’ detailed with Kubrick’s claustrophobic cinema classic The Shining, and comparing the source novel by Stephen King.

What is The Shining about?

Writer Jack Torrence (Jack Nicholson) takes a job looking after the Overlook hotel for the winter. Wife Wendy (Shelly Duvall) and young son Danny happily go with him – but the legacy of the hotel’s former caretaker comes to haunt them all.

If Kubrick’s adaptation of The Shining is a cinema masterpiece, it’s a controversial one.

Kubrick’s film is a great Kubrick film rather than a faithful adaptation of the book. Moreover, much of what was left out removes the intricacy that elevates King’s version of The Shining to modern literary classic.

There are spoilers ahead, both for Kubrick’s film and the book by Stephen King.

One of the most striking differences between the film and the book is the way Danny’s clairvoyance – his shining – is handled.

In the book, invisible friend Tony reveals things to Danny beyond spooky premonitions. For example, where to find things that go missing around the house.

Danny can also tune into other people’s thoughts, sometimes for comic effect as well as terror. This is almost entirely missing from the movie beyond Hallorann’s brief interaction with Danny.

While the film sees Danny haunted by Room 237 and the murdered Grady girls, it’s far more pervasive in the book. The Overlook is stuffed with memories that won’t die. That’s why it wants Danny.

There’s also evil in the playground and the presidential suite – and Danny sees the dog man, not Wendy.

These spectral events become increasingly real, until others see them as well. Wendy and Jack hear distant music, and discover streamers discarded in the elevator.

In the film, the hotel’s past life roaring back into existence only features fleetingly, and only at the very end. For instance, when Wendy glimpses the dog man, and later when she runs into a room full of dead party guests.

Kubrick filmed some of the Overlook’s exterior shots at Timberline Lodge, Oregon. The Lodge asked for the room number to be changed because they thought guests wouldn’t want to stay in room 217 (the Lodge didn’t have a room 237, so it seemed a safer choice).

That’s not all Kubrick changed about this nightmare bedroom.

Room 217 is almost the book’s origin story. Danny repeatedly references the Blue Beard fairy tale, in which a young woman is given a key and told not to open one particular door. She can’t contain her curiosity – and is rewarded with the sight of her murdered predecessors.

This mimics what happens to Danny. He’s given the key to hundreds of rooms and told not to open one particular door (217) but can’t help himself.

Without Blue Beard, room 237 in the movie lacks some of that significance. It also loses its connection to Orwell’s room 101, i.e., a place that holds each person’s greatest fear.

In the novel, Jack’s worst terror is what he did to a former student. That’s who he actually meets in room 217.

As a novel, The Shining is constructed around premonition and possession.

Jack and Wendy are scared of turning into their parents. Jack’s father was an abusive drunk. Wendy’s mother is manipulative and bitter. Of course, both become the thing they’re running from.

For Jack, the spectre of Grady – the former caretaker who killed his family – also looms large, and is another fate he can’t avoid.

The irony is that Jack genuinely loves Wendy and Danny. His drunken physical abuse of Danny aside, he shows his real feelings for his family many times.

This makes his transformation into a “human monster” – technically it’s a possession – all the more tragic. Jack’s battle with the booze eventually destroys his better side but, because we know his struggles, it’s easy to feel sympathy for him.

Kubrick sets this up rather differently. Jack is dry and almost puritanical (perhaps as a result of his five months on the wagon). There are few cosy laughs on the drive up to the hotel, for instance.

His mental state also flips abruptly. He wakes up one morning singing the hotel’s praises and, shortly after, becomes mean and morose.

The way he snaps at Wendy is particularly abrupt – and yet Wendy doesn’t seem too shocked by it (i.e., it’s happened before).

Jack in the film isn’t a particularly nice guy to begin with … and then he just gets worse.

The book has several creepy scenes with a topiary that comes to life. Kubrick’s film does away with the animals in favour of a hedge maze.

Whereas the animals add a nervy tension throughout the novel, the movie’s maze isn’t a source of terror so much as the setting for the final chase (and the means of killing Jack).

In Kubrick’s movie, Halloran travels from Florida to Denver – battling a deadly storm along the way – only to die the minute he arrives at the hotel.

Retrospectively, this is troubling. It reduces Hallorann (and Scatman Crothers) to ‘black guy who dies’. This formerly common casting strategy introduces non-white characters so they can be killed off without jeopardising the leads.

This doesn’t happen in the book.

The book ends with Danny, Wendy and Hallorann as an alternative family unit. In fact, Hallorann is the father figure Danny deserves: the father who will do anything to save him.

In the book they’re like old friends, even when they meet for the first time. There’s a more detached vibe in the film … and it’s less convincing that Hallorann would leave Florida to save Danny’s life.

Stephen King writes out the Overlook in an enormous explosion. As caretaker, Jack must keep a close eye on the hotel’s decrepit boiler. He forgets to check on it because he’s busy trying to kill Danny.

The resulting explosion destroys the hotel and its evil presence.

None of this happens in the film because the boiler is never mentioned. And rather than fire, it’s ice that ends the movie.

Danny escapes to the hedge maze and tricks Jack into getting lost. While Wendy and Danny neatly escape in Hallorann’s snow truck, Jack simply freezes to death.

The hotel survives them all. And, according to the final close-up of an old photo, Jack lives on as one more ghost.

The Shining (1980), directed by Stanley Kubrick

Westworld (1973): gods, robots and the trouble with free will

All Quiet on the Western Front, by Erich Maria Remarque