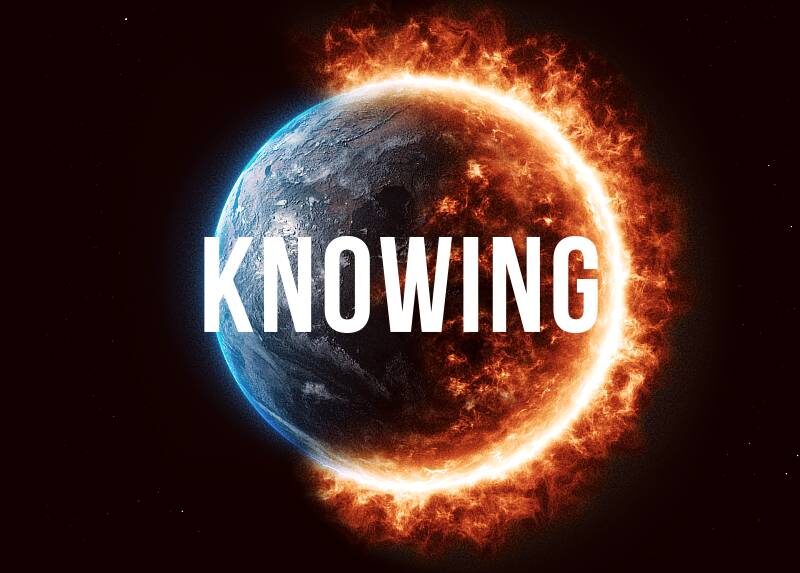 What happens in Knowing?

1959: a school teacher asks her class to draw pictures of the future to put into a time capsule. Most of the kids oblige with robots and rockets but one child – Lucinda – becomes obsessed with writing a creepy number code.

1999: Nicolas Cage plays MIT professor of astrophysics and widower John Koestler (cf. Arthur Koestler and The Roots of Coincidence). His son Caleb goes to Lucinda’s school. When the time capsule is dug up, Caleb is handed Lucinda’s coded messages. Like her, he begins hearing ghostly whispers and sees strange men lurking around.

Being a man of science and all, it’s about 3 minutes before Koestler discovers the code relates to disasters. Then he realises it predicts future disasters.

The end game: An imminent solar flare is about to destroy the planet. The strangers are aliens: they’ve come to take humans to other planets so the species can start again. Caleb is one of the chosen ones. Koestler is not, and is left behind. The film ends with the total annihilation of Earth and, for the saved ones, a fresh start on a distant planet.

Why ambiguity is the key to the film

Whether you love it or loathe it, Knowing does an awful lot with its 2-hour runtime.

This supposedly sci-fi disaster movie flips both genres to create something altogether unexpected. Meanwhile, its pseudo-survival plot is an allegory for grief, religion and the human condition – with a nod to the 9/11 disaster.

The film borrows from horror, too; the genre’s ambiguity is partly what makes the film a masterpiece of haunting dread. Moreover, it translates complex concepts into an action plot that, ultimately, is heartbreaking, immense, and almost operatically tragic.

Knowing is inventive and universal – and it still has time to telegraph its final twist right under your nose. Here’s how it works.

Lucinda’s scribbled numbers predicts when and where mass disasters will strike. When it falls into Koestler’s hands, the code unlocks the secrets of human tragedy and starts a countdown to destruction.

In the disaster movie genre, this is where the protagonist begins a quest to overcome the impossible. At first, Knowing seems to do this, too.

Koestler becomes the Cassandra figure from Greek mythology; like her, no one will believe his prophesies. (This is a common device in the genre, by the way: the lone wolf by circumstance.)

When Koestler cracks the last part of the puzzle, the family, which now includes Diana and Abby, race to reach safety. Unlike other disaster movies, however, they don’t make it. Or at least not entirely.

The alien strangers have come to save a select band of survivors: children (see also The Day the Earth Stood Still).

Caleb and Abby are taken away to a distant planet, while John and Everyone Else – the EE mentioned in the alien code – are left to a fiery annihilation.

This is where the film also subverts what we expect of science fiction, which is broadly redemptive – though through human perseverance rather than divine intervention.

The film’s title screen/logo contains the twist (a planet eclipsed by a sun). See the last few seconds of the trailer.

How Knowing telegraphs its final twist

The solar flare is Knowing’s red herring twist, telegraphed throughout by subtle but insistent references to unseasonal heat. The bigger twist is that this presages a doomsday neither planet nor protagonist can survive.

Of course, Knowing isn’t the first to sacrifice its lead actor, either as a plot twist or as per the genre’s reliance on saviours.

1972’s The Poseidon Adventure makes a meal of it – even making its saviour a priest – but you’ll see the pattern everywhere from Deep Impact to Greenland.

If this is a genre clue about how things will end, there are far more blatant signs.

Lucinda is the other Cassandra character no one believes. She may have glimpsed the future, but it can’t save her, and won’t save Koestler either.

The film then introduces Diana and Abby to complete the Koestler the family unit. This is one of the most common story resolutions, yet Knowing subverts any expectations of a happy ending.

Moreover, Diana and Abby are female counterparts to John and Caleb. Diana’s death – exactly at midnight on the day Lucinda predicted – is a clue to John’s fate.

Finally, Koestler gives up Caleb to save the boy’s life. It’s a heart-breaking choice, one the film stokes with the repetition of their promise to stay together forever. That repetition is as much as double cross as genre ambiguity – and a clue that we should expect exactly the opposite.

On-screen conversations about determinism and the afterlife are further clues about Koestler’s fate; they’re also the film’s key themes.

Koestler doesn’t believe in fate or predictions, or as he calls it, knowing. This is partly because he’s a man of science but also because of his bereavement:

“I think shit just happens. But that’s me.”

Of course, he’s wrong on a monumental scale and yet half right. Fate can be known in advance (i.e., Lucinda’s code) … but that fate is inescapable. It’s destiny.

This is the inside joke of the film. Koestler, with his expertise in maths and astrophysics, is the perfect – and perhaps only – man capable of cracking the code. And yet can’t his knowing can’t save anyone.

Koestler doesn’t believe in heaven either, a position that puts him at odds with Caleb – more of that below.

Sidebar: the alien/angelic code is a cursed chalice. Its knowledge could save countless lives, including Koestler’s wife… but it ends up under the ground for 40 years [releasing its curse is another horror movie mechanism, btw – along with dark-haired, creepy little girls]. The greater irony is that the time capsule is Lucinda’s idea. However, the twist fits with the idea of humans receiving knowledge they can’t handle.

Knowing is a film about grief; like Don’t Let Go, its non-conventional plot is a commentary on how we cope with death.

Koestler and Caleb are struggling with bereavement. While Caleb tries to bring his mum back through videos and talking about her, Koestler shuts down.

In fact, the plot and its themes are very similar to 2002’s Signs:

Knowing reflects what grieving is like in an understated, naturalistic way. For instance family and friends encourage him to date again but Koestler isn’t ready to move on. In low moments he doesn’t even feel like there’s any point to anything. Famous last words.

But aside from the personal experience of bereavement, Knowing touches on collective grief. The 9/11 disaster is the first number pattern Koestler spots in the alien code (it’s also right inside the circular stain from where he ‘accidentally’ places his glass).

And when he fails to stop the subway train crashing, the crowds of people walking silently through the dust cloud is eerily similar to scenes from the attack on the Twin Towers. [CW: disturbing images].

In this sense, the film reflects on our responses to mass disaster. Sometimes there’s no comfort or meaning in it. Some will find comfort in faith, others in secular beliefs that life will carry on or – as in science fiction – our species will continue among the stars.

Knowing’s musical leitmotif is the Allegretto from Beethoven’s Symphony No.7 in A major. It’s a striking piece of music that loops between playful and foreboding.

Koestler plays it at two points in the film. The first time is when he thinks about his dead wife as the film begins. We hear it again when he drives home just before the solar flare strikes. Both times, the music functions as an elegy.

Knowing is a death mask – a memento of the dead. At first that’s Koestler’s wife. Later it’s the entire human race.

The film’s big tension is between science and religion:

While Caleb believes his mum died and went to heaven, Koestler doesn’t. This comes back to bite at end, when Caleb is rescued and Koestler isn’t.

Compare this to 2014’s Left Behind in which believers are taken up to heaven before the horrific End Times, in accordance with Biblical prediction of the rapture. Non-believers (including Nic Cage, again) are left to rue the day.

Seeing Caleb taken up intact, it’s easy to see a parallel with concepts of heaven (and belief and innocence). At the film’s end, Koestler also seems to understand why he can’t go with Caleb, and accepts this as fitting in some way. He doesn’t believe in heaven, after all.

Like everything else, this ending is rife with ambiguity. Caleb and Abby inherit an unspoilt, Eden-like world. The last image we have of them on this alien planet nonetheless parallels Adam and Eve. This is a striking contrast to hell-like scenes of Earth consumed by fire and brimstone.

However, while Koestler dies, the implication is that he achieves a spiritual salvation. He returns to his father, just as Christians and similar religions believe they do when they die. In the moments before destruction, his father comforts him with the words: “this isn’t the end”.