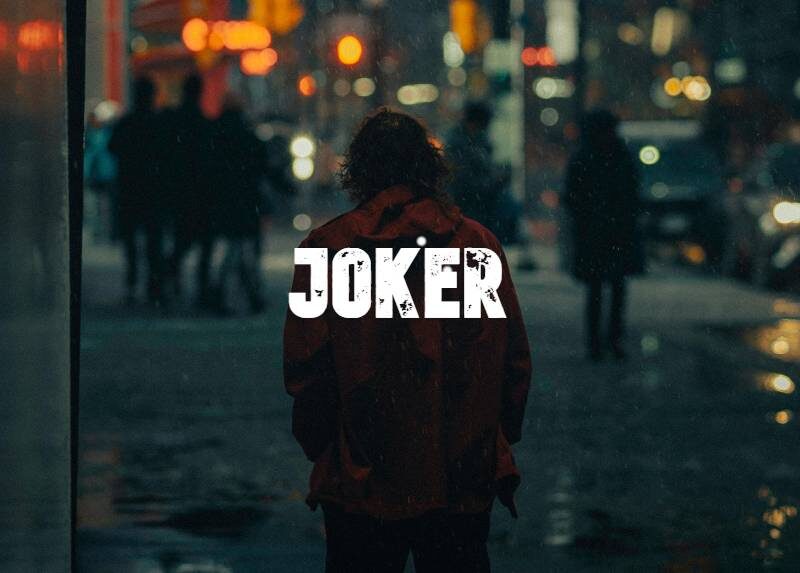 Todd Philip’s 2019 film Joker plays on good and evil, the comedy of Charlie Chaplin … and stairways.

What is Joker about?

Arthur Fleck (Joaquin Phoenix) is a failing clown who dreams of being a stand-up comic. Mistreated by the welfare system and abused by just about everyone else, Fleck retaliates – and finds violent revenge wins him the adulation he craves.

Why is Joker a clown?

Clowns are two-faced figures; they use comedy AND tragedy to get their laughs. We’re invited to smirk at their misfortune – on the assumption that everything will be OK in the end.

It’s a tried-and-tested formula handed down from medieval jesters and made brilliant by Charlie Chaplin, arguably the world’s most beloved ‘sad clown’.

The Tramp was the hero of many Chaplin films. As you’d expect from the name, he’s poor, hungry and down-on-his luck. Tragically, that makes him the punchbag for society villains – rich men with moustaches – who do their best to trample him even further.

Chaplin plays these grim circumstances for laughs, balanced by the Tramp’s determination to stick up for himself and those worse off (usually women or children).

The Tramp represents the best of human nature – though one heavily influenced by the optimism of the American Dream and the promise of religion. In other words: be self-reliant, be good, and “smile though your heart is aching” – for the meek shall inherit the Earth.

Chaplin features heavily in Joker but from a distance – a bit like Arthur Fleck’s shadow.

Most noticeable is the use of the song Smile (see the trailer). A screening of Chaplin’s Modern Times also features in the plot of Joker.

Fleck sees himself as a Chaplin figure: a man put on Earth to make others laugh. And, with a nod to the Tramp, we see him crying through his clown make-up as the movie opens, literally painting a smile over his tears.

Fleck is a clown, too: that’s his day job. He also wants it to be his night job, in that he wants to be a stand-up comedian. Unfortunately, he’s just not funny.

Like the Tramp, Fleck lives in abject poverty but cares for others – notably his mother. He’s similarly ignored and misunderstood by society, and physically beaten for being down-on-his-luck.

And, like any Chaplin movie, Joker is stuffed with slapstick elements. There’s Arthur’s buffoonish run, his hyena-like laugh and the ‘pie’ in the face (though here it’s a board).

This mix of pain and almost-comedy sets Fleck up as a tragic figure that we can’t help but care about. He stands for the homeless or lonely guy in the street that society chooses to ignore. On the big screen, his circumstances and childlike mannerisms make it easier to see it all for what it is: injustice.

All of this makes Arthur Fleck an underdog – just like Chaplin’s Tramp.

Arthur Fleck could have been a superhero. Specifically, he’s the Batman that never was.

When Fleck finally snaps and shoots his tormentors on a subway train, it both repulses and inflames Gotham. As with Batman later on, some citizens see this masked vigilante as a dangerous menace, while others see him as the city’s saviour.

The ‘dark Batman’ angle is given further prominence by the suggestion that Thomas Wayne is Fleck’s father too, making Arthur and Bruce brothers.

The movie resolves this tension as a red herring – but it could be true. As significant portions of Arthur’s life are imagined, it’s possible he also imagines that what Wayne tells him about being adopted is true – Fleck is nothing if not an unreliable narrator.

There’s more about this kind of mirroring in The Departed: dirty rats and the ‘double’ theory.

The stairs that lead to Arthur’s home are key to a central theme in Joker.

As Fleck, Arthur trudges wearily up them every day. At the top lies the life he’s always known: poverty, loneliness, and looking after his mother. His journey upwards represents his battle against his external circumstances, and his internal struggle to be good.

Later, as Joker, he dances down the same steps. Once he stops trying to be good, and embraces the road to hell, life becomes much lighter.

There are other reversals like this, each of which reveal Fleck’s ambiguity as both hero and villain. Or, if you like, as a man pushed too far, like Michael Douglas in Falling Down.

Arthur cares for his mother with incredible tenderness. Later he suffocates her. Similarly, he invents a romantic relationship with his neighbour, only to terrorize her in real life once the Joker’s personality breaks free.

The internal struggle is key to understanding Fleck, and it erupts in all the wrong places – like his uncontrollable laugh.

The laugh resonates because no one else laughs at Fleck’s jokes. This reveals the lie behind the phrase “laugh and the whole world laughs with you”, and underlines his loneliness.

There’s also nothing remotely funny about Fleck’s situation: his overblown laughter is a spotlight that shows just how humourless his situation is.

For Fleck, the laugh is a visually uncomfortable tic, one that he tries to stifle. Later, he comes to embrace it – and his murderous nature – as his true self.

At the start of the film, Fleck cries while making himself up as a clown. At the end, he wears his make-up like war paint and does a victory dance on the steps. Having resolved the internal struggle, Arthur is no longer hiding behind a mask, but revelling in it as his true persona.

This is where the line – the ambiguity between good and evil – stops. Coming down the stairs as Joker kills off the good inside him (Arthur) and embraces the dark and chaos. The only way is down.

The significance of the colour white in Fahrenheit 451