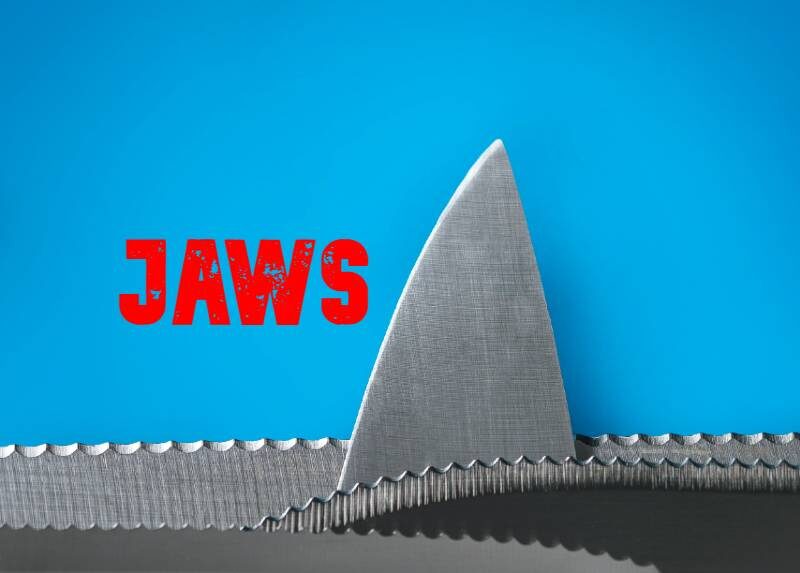 A killer from the deep may have given us nightmares after seeing Jaws, but it’s conflict that really gives Spielberg’s shark tale its bite.

What is Jaws about?

When a great white shark appears off the coast of Amity Island, Police Chief Brody (Roy Schneider) must overcome his fear of the water to stop nature’s greatest predator. But the shark isn’t the only thing that threatens swimmers, surfers and the town’s tourist season.

What the shark in Jaws represents

A drunken swimmer ends up a midnight snack … and Jaws’ iconic opening scene wastes no time demonstrating what Spielberg’s film is about: the invisible and ruthlessly efficient killing machines that lay in wait for us ‘out there’, beyond the rule or reason of humans.

In pitting Man against Shark, the film reflects the human drive to conquer adversity (or just … to conquer). Evading the shark isn’t the only battle, however: the film contains an almost infinite number of conflicts – opposing or contrasting elements that create tension.

This tension drives plot and gives purpose to scenes and story (see Into the Woods by John Yorke for a fuller explanation).

In Jaws, the big conflict is Life or Death – yet only around half the narrative is set in the water, and much less involves the shark directly. Instead, the film stokes dramatic tension through additional conflicts, many of which are not shark related at all.

Those who put business or self profit above the lives of others almost always end badly – in fiction, anyway. From The Towering Inferno to Jurassic Park, the love of money is the root of all evil.

In Jaws, it’s Mayor Larry Vaughn who lacks moral fibre. When Chief Brody wants to close the beaches to save lives, Vaughn – voicing the concerns of the business community – keeps them open.

Such is his devotion to the dollar that Vaughn practically drums up business for the shark. “Why aren’t you in the water?” he asks an old couple. “Please, get in the water.”

More precisely, it’s Vaughn’s desire to keep the beaches open that leads to the death of Alex Kintner (and, presumably Pippin the dog).

More Jaws: 10 ways the book differs from the film

2. Brody is an underdog

That Chief Brody (Roy Schneider) is a fish out of water is both a source of humour and a foreshadowing of danger – his fear of water is like a canary singing to the audience.

More specifically, he must overcome an almost Herculean series of challenges before facing the killer in the final reel.

Brody is a New Yorker and a landlubber. He doesn’t even like water. “Martin sits in his car when we go on the ferry to the mainland,” Elaine Brody (Lorraine Gary) reveals. “I guess it’s a childhood thing.”

Brody is new to his job and awkward with it, and he lacks the social confidence demanded by island life. But when Elaine asks when they’ll finally be accepted by Amity, the reply is: “Never! You’re not born here, you’re not an islander”.

Brody wants to close the beaches and save lives. Business owners object. We know how that ends. Without this pressure from the business world, however, there wouldn’t be any story to speak of.

Instead of just avoiding the shark’s habitat, the men of Amity determine their only option is to hunt the shark – to show mastery over the water as well as the land. And we know how that ends, too.

Brody may be Chief of Police, but every time he makes a decision, someone overrules him. On land, it’s Mayor Vaughn. At sea, it’s Quint.

Compare how Quint and Hooper are quite at home at sea and around the shark, while Brody mutters about wanting a bigger boat and – like E.T. – wanting to phone home (Quint removes this escape route by smashing the radio to pieces).

It’s only when Brody is alone in the final scenes that he can be his own man. By stepping up to the masculine ideal (be ruthless, be a killer, play to win), Brody is actualised as the film’s true hero.

Another iconic scene – when Mrs Kintner slaps Brody in the face – highlights a number of opposites.

The arrogance of the town’s fishermen as they celebrate killing the wrong shark contrasts with Mrs Kintner’s despair. Her funeral garb is in sharp relief to their celebration.

Mrs Kintner is the human consequence of the town’s actions. Her slap is a reminder that Brody isn’t his own man – his masculinity is constantly challenged by those who want to control his actions.

The shark (of course)

The final act takes place in the water, yet Brody is battling the idea of shark long before this. Early in the film it’s a book of sharks that first brings fear out of the water and into the Brody’s living room.

Does a shark or a boat propeller kill Chrissie? Why will no one believe Brody’s choice – and why does he let himself be dissuaded? There’s also the delicious irony that he hates the sea, yet that’s exactly where his job must take him.

It’s not surprising that Brody must contend with so many conflicts: it makes him the underdog, and that means we want him to succeed in spite of, and because of everything he has to deal with. Without something to overcome, a film doesn’t have a hero (or heroine).

3. The reason Quint and Hooper hate each other

Quint (Robert Shaw) and oceanographer Matt Hooper (Richard Dreyfuss) are a dynamic duo. Not because they pair up to defeat the odds, but because everything about them is in opposition.

Animosity drips from the screen every time they’re together – probably because the actors were at war as much as their characters (there’s more about their feuding in Wondery podcast Inside Jaws).

Quint embodies some big themes in the film. He is the Ahab (Moby Dick) character: a captain obsessed with catching a big ‘whale’.

In this sense, Quint is the hyper-masculine aspect of Brody’s character. Unlike Brody, Quint is a big fish – even his boat is called the Orca, i.e., the Killer Whale [great white sharks are scared of orcas]. While Brody runs from conflict, Quint sails into it.

As an old-time fisherman, Quint’s character represents the old world, in which humans used the planet as they saw fit (compare Hooper, the new breed of environmentalist who seeks to understand and preserve sharks). Peter Benchley’s source novel shows this contrast is more detail.

Jaws probably wasn’t made with an ecological or social message in mind but there are shadows of both in the film, at least in contemporary viewings. Again, Quint is our way into this, as a survivor the USS Indianapolis.

The fate of the USS Indianapolis is both terrifying and haunting. Almost 1,200 sailors fled the ship when it sank in 1945, yet only 317 were rescued: many were killed by sharks. Quint’s monologue about the event is another unforgettable moment in the movie – but his final line is “anyway, we delivered the bomb.”

He’s talking about the atomic bomb dropped on Hiroshima, which killed around 150,000 people. Not unlike the shark, humans are drawn to death again and again – for food, survival or mastery.

Why conflict is key

Dialogue, scenes and stories depend on conflict: opposing ideas or events that stand in the way of events running smoothly. Almost every film, play, opera and pop song you can think of uses conflict.

As John Yorke explains, conflict is crucial to plot, and it happens in every scene and every line of dialogue. The greater the conflict, the more tension – and the greater the excitement. This lends itself to war movies or heist stories, but it’s also what causes things to be funny, or sad.

There’s an almost unbearable tension at the end of Jaws, when the conflict is between living and dying. But what makes the film so compelling are the battles which consume everyday people.

This may also be why Jaws – which, after all is ‘just’ a monster movie – feels so much weightier than films that revisit the genre, including The Shallows, The Reef, 47 Meters Down and, er, Sharknado.

Notably, all of these films spend more time in the water actively battling sharks – but without human dynamics and tensions, there’s less reason to care who wins.