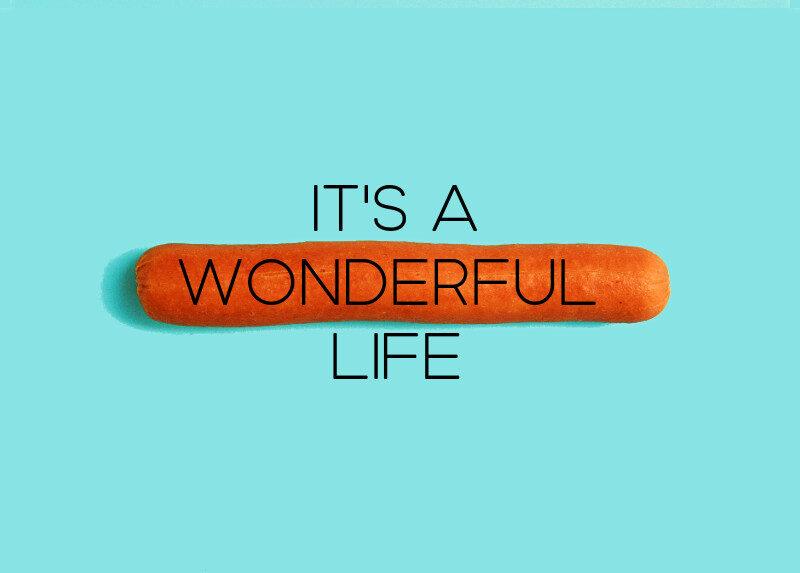 In which we unpack how It’s a Wonderful Life flips Charles Dickens’ famous story prototype, and whether George Bailey is like Judas.

This page is about It’s a Wonderful Life, with spoilers and references to suicide. George Bailey is absolutely fine in the end but, like the film, this page goes to some dark places before coming out the other side.

If you’re struggling, know that it’s OK to talk about it. These organisations can help (or direct you to support in your country).

It’s a Wonderful Life is a film of two halves. The first plays out key moments in the life of George Bailey (James Stewart). George wants to travel the world and have adventures. Instead, fate conspires to keep him in Bedford Falls, the town he longs to escape.

As a child, George saves his brother’s life, and later sacrifices his dreams for him. Harry becomes an all-American hero several times over, while George stays behind to run the family business. Everything George does is for the benefit of others … and he hates it.

The turning point comes one Christmas Eve. Uncle Billy misplaces $8,000, putting George on the hook for fraud and bankruptcy. Seeing no way out other than a life insurance payout, George decides to kill himself.

Then guardian angel Clarence (Henry Travers) shows up. But rather than just saving his life – or magicking his troubles away – Clarence grants George’s desperate wish to never have been born.

For a few hours, George sees how things would have been like without him. Harry dies in childhood, his old boss loses his mind, and his children don’t even exist. Only the awful Mr Potter (Lionel Barrymore) thrives, turning Bedford Falls into a town of mean drunks and short tempers.

The short, sharp shock snaps George out of despair. He runs home to his family certain of one thing: life is wonderful. It always was.

The film showing at the Bedford Falls movie theatre as George runs home is The Bells of Saint Mary – also the name of a 1945 film starring Henry Travers (i.e., Clarence).

It’s a Wonderful Life began as The Greatest Gift, a short story by Philip Van Doren Stern, with influence from Charles Dickens’ 1843 novella, A Christmas Carol.

Now, this is interesting for a couple of reasons.

As the Bible tells it, Jesus’ birth to a virgin is the original Christmas miracle. Hence the name. We still tell variations of this drama, sometimes in quite unexpected ways (Alien’s Prometheus prequel, anyone?)

But at the same time, it’s been overtaken by a more human-facing narrative: the spiritual re-birth of the sinful man. Or, in other words, A Christmas Carol. This narrative is so ingrained we don’t even need to wait for Christmas to tell it: see city thriller The Game.

A hundred years after Dickens, even director Frank Capra has fun with the tale.

A Christmas Carol teaches miserly Scrooge the value of life one Christmas Eve. It’s a Wonderful Life flips this, taking dutiful family man George (i.e., Bob Cratchit) to the brink of destruction instead. And it ends, not with Scrooge cheering Merry Christmas through the streets, but George Bailey.

This fits the film’s two-halves structure. The first hour unrolls in linear order, from George’s boyhood to Christmas Eve 1945. The second half reverses it.

Just as Dickens’ tale takes Scrooge on a tour of lost loves and ominous gravestones, George visits a nightmarish version of Bedford Falls – a mirrored image in which everything is backwards.

The thing is, George has always laboured under a warped sense of reality and resentment. It takes a vision of hell to shake him out of it.

While George sees terrible things in Pottersville, note that Mary’s tragedy is to be unmarried, a librarian, and wear glasses. No comment.

Harry may win the awards, but George’s life is equally heroic. And yet, whether he’s saving lives or levelling up society, no good deed goes unpunished.

So there’s lots of bad luck – but there’s a fair bit of outside influence, too.

Mr Potter tries to destroy George several times. When the board votes for him to stay in town, it’s possible Potter even fixes the deal out of spite.

Uncle Billy loses the cash that tips George towards suicide. Even Mary’s dreams seemingly over-rule George’s. He spends his life wishing for a million bucks and to see the world, but its Mary’s wish – to be married and live on Sycamore – that comes true.

It’s fair to say George is one of cinema’s true underdogs. All the good he does for others pays out punishment – to the point where you really have to wonder if he’s not jinxed. But is George a hapless victim at all?

George is a slave to other people’s happiness, and that’s an ambiguous position to be in. Mr Potter calls it when he says:

“George Bailey is not a common, ordinary yokel. He is an intelligent, smart, ambitious, young man who hates his job, who hates the Building and Loan almost as much as I do.”

It’s intriguing to think George and Mr Potter are twinned like this. We expect them to be mirror opposites, because drama relies on exactly that conflict – yet here we learn they share an awful emotion.

The difference is that Mr Potter leans into it, aiming to profit from his hard heartedness. George fights it, though it’s only when he comes out the other side of despair that he triumphs. This is more important than he knows: Potter is the man George could well grow up to be.

Of course George helps others because he cares … but also because he must. It’s not hard to feel that way with portraits of your dad watching over the business, and Abraham Lincoln watching over your home.

But the lie of it – that he has no choice in the matter – eventually undoes him. Clarence says as much when he jumps into the river first: he knows George will always save the other person first.

This is why Clarence doesn’t show George life after his death, but the void of non-existence. George can’t see the beauty he brings into the world; he has to see the misery his absence makes to other people first.

The Butterfly Effect and the Judas theory

If George is a chronic people pleaser, his trip to Pottersville reveals how deep the chains go.

No one else jumps in to save Harry, for instance – so he dies. With no one to stop him poisoning a patient, Mr Gower goes to prison and comes out a broken man (no guardian angel for him!).

Other consequences go further, however, putting George at the centre of everyone’s universe. Hence Mary never falls in love … and gets bad eyesight to boot. Violet Beck falls much further.

With no one to stand up to Potter, there’s no rise in living standards. Eventually, there’s no Bedford Falls at all, but only Pottersville, a neon-clad hell of sex, sin and misery.

It’s an ego boost for sure, but also one hell of a responsibility. Essentially, George Bailey flaps his wings, and the world changes. (While the term “Butterfly Effect” didn’t appear until the 1960s, the concept is far older).

It’s tempting to interpret George’s patience in the face of punishment as a kind of Christ-like sacrifice. Incidentally, this would bring the narrative full circle from Dickens back to the original Christmas story and salvation.

George isn’t actually the son of God, though. He doesn’t die, and his rebirth is metaphorical. Instead, perhaps George Bailey is the Judas figure. Not because he betrays anyone, but because he too accepts sacrifice to save the people from themselves.

This isn’t to say Judas is a saviour, but that he plays a deeply tragic role in the drama of the crucifixion. In both cases, God watches on from heaven. See also short story Three Versions of Judas, by Jorge Luis Borges … and, er, Jesus Christ Superstar.

A Christmas Carol is a modern parable about the dangers of greed. It’s a Wonderful Life continues its juxtaposition of love of money against social duty (a recurring motif in the Bible).

Scrooge doesn’t care if struggling neighbours end up in the poorhouse, while Potter actively impoverishes his to maximise rental income.

George doesn’t just oppose this kind of cannibal consumerism – he champions an economic system that leaves everyone better off. Lifting people out of poverty is another set of butterflies wings, one with positive consequences across society:

Of course Potter prefers to keep people struggling to get by, because that traps them in a cycle of labour exploitation and price fixing that profits him the most.

George has the harder sell in convincing the townspeople:

“Well your money’s in Joe’s house – that’s right next to yours – and in the Kennedy house, and Mrs Maitland’s house, and a hundred others. You’re lending them the money to build and then they’re gonna pay it back as best they can. Now what you gonna do, foreclose on them?”

In the end, though, the poison spreads. George believes Potter’s lie that his life is worth more dead than alive, and loses all hope. Of course he does. The creed of men like Potter is to live and die alone, and unloved – and certainly without lifting up the lives of others.

In the end, perhaps this is why we’re still drawn to Dickens’ story, and why It’s a Wonderful Life remains so disturbing and relevant. It shows us the devil redrawn as consumer desire … and that’s a battle we’re still on the fence about.

George’s troubles mirror biblical notions of duty, where goodness isn’t motivated by immediate praise or pay-off, but by heavenly reward. This feels like a particularly comforting belief for those who live with inequality, hardship or social upheaval: life isn’t fair, but better times lie ahead.

So it is with George, who endures great injustice, only to find in the film’s closing moments that his reward has always been there for the asking. At his lowest moment, the love finally comes back to him, with the whole town rushing to repay his goodness.

Remember how George wishes throughout to win a million bucks? After a lifetime of disappointment, he finally gets his reward. As Harry proclaims in the final scene:

“A toast to my big brother, George: the richest man in town.”