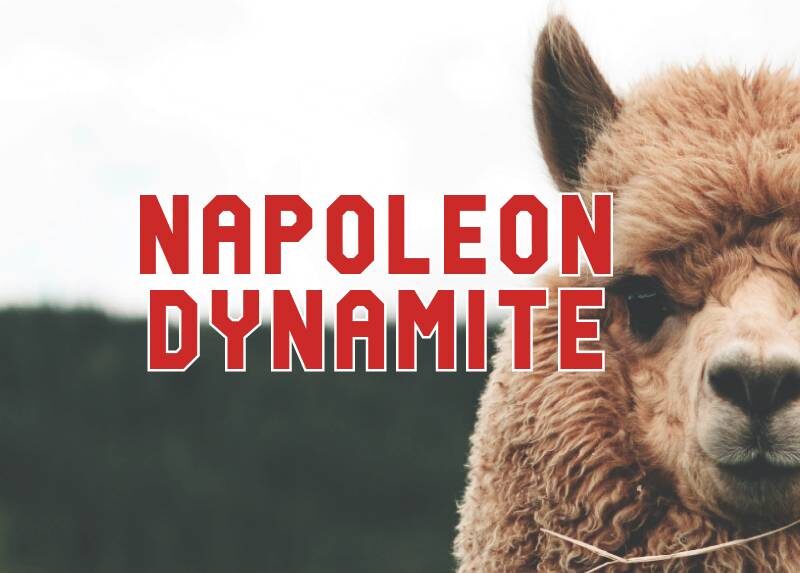 How Napoleon Dynamite is a “good, bad” dancer, and what the fancy footwork means for the film’s storytelling.

2004 offbeat indie comedy Napoleon Dynamite takes a sideways look at growing up. Principally about the unconventional Napoleon (Jon Heder), it’s about misfits who refuse to be anything but themselves.

The film ends with new kid Pedro (Efren Ramirez) running for class president. Like many of the choices made in the course of the story, this sounds delusional and doomed to failure. At the last minute, Napoleon gets on stage and dances, snatching nerd victory from the jaws of defeat.

Most movies resolve with action, closure or a twist. In Napoleon Dynamite, the dance is all of these. It reiterates the film’s themes, resolves its various story strands, and sets the emotional tone of the ending.

Clearly, then, this last dance is critical. No sweet moves = no movie. But what about those moves – is Napoleon a good dancer? And does it matter?

Here’s one way of looking at it. Firstly, no, Napoleon isn’t a good dancer, at least not in the conventional sense. He’s not meant to be. His awkward yet authentic movements are in keeping with his part in the story, and its message about being yourself.

But wait: other students break out into thunderous applause. Doesn’t that mean they think he’s good? It even convinces them to vote for Pedro – despite his awful speech.

Evidently Napoleon is both bad dancer and good dancer at the same time, and that’s already pretty interesting. And the dancing – well, it’s not just about the moves, is it? Here’s how it goes.

What is Napoleon Dynamite about?

Most plots are linear, even when they mess with time. Something happens, causes a ton of drama, and eventually resolves. Napoleon Dynamite doesn’t quite follow this pattern. Instead, it cuts between events that take place during one school year.

Napoleon befriends the new kid and grows to like Deb (Tina Marjorino). Uncle Rico comes to stay, but cares more about remembering past glories and munching on steak. Rico and Kip try to make fast cash. Kip falls in love.

Pedro and Napoleon try to get dates, work on a chicken farm and visit the state fair. Pedro runs for class president, shaves his head, and forgets to make a skit. Napoleon watches an exercise tape and saves the day.

Rather than following one main crisis through to resolution, Napoleon Dynamite is more like how we experience nostalgia. Keep in mind director Jared Hess describes his movie as “so autobiographical”.

Memories swim into focus, paint broad outlines, and vanish. We see the colour – kids on a school bus watch a farmer kill a cow – but don’t linger on internal dialogue They scream; we know they’re scared; we move on. It’s a very lean film.

This is a story which looks back, but is also about looking back, and about how easy it is become trapped in the past (i.e., Rico). More obviously, it’s about friendship, loyalty, and being true to yourself and others.

Then there’s the school dance. This 50/50 disaster sees Napoleon lose his date, but get to dance with the girl he actually likes.

In cinema, the school dance is a rite of passage. It’s a backdrop to love, pranks and coming of age (i.e., Grease). Footloose recasts prom as revolution, in a town that bans dancing because of what it represents: sex, death and growing up.

The movements and physical proximity of dance can certainly mimic sex. But even without sexual overtones, the school dance is a group ritual that hovers between popularity contest and mating call.

As such, it’s fertile ground for stories about young love, cliques and the kids who don’t fit in. In true-life British drama Everyone’s Talking About Jamie, prom is a flashpoint for acceptance. In Carrie, it’s bloody revenge against the popular kids.

Similarly, for Napoleon, Pedro and Deb, the school dance represents the culmination of complex social rules, boundaries and hierarchy.

Napoleon, who’s largely oblivious to expected behaviour, breaks these rules when he asks a popular girl to the dance. It’s a fleeting victory: Trisha rejoins her clique as soon as they arrive.

Still, it foreshadows the end of the film. Instead of knowing his place in the social hierarchy and staying invisible, Napoleon steps on stage and owns the moment. The twist is that, this time, it’s enough to dismantle the false idols of popularity and privilege.

When he finds his feet at the end of the film (pun intended) Napoleon is a solo performer dancing to the beat of his own drum. It’s dangerous territory – but he nails it.

This dance resolves the film’s main themes. Napoleon is willing to give everything to see his friend succeed, including being his most vulnerable but truest self.

For much of the film, Napoleon is clumsy and awkward; he can’t even open his eyes fully. Now he inhabits his body with total control.

Similarly, the final dance reveals Napoleon’s true character, warts and all. What’s so satisfying is that this is the person he’s been all along: unsophisticated, mismatched and immature, sure – but unapologetic about it.

When the other students cheer Napoleon’s sweet moves, dance becomes a potent form of revenge. This is especially cathartic because teen queen Summer also dances (a sign-language interpretation done for kudos rather than solidarity).

Why do they choose the invisible kid over Ms Superficial? Maybe for all the above reasons: because Napoleon is genuine if nothing else. Perhaps also because no one truly enjoys living under the dictatorship of popularity … and we love to see the mighty fall.

Or maybe and also it’s because Napoleon’s the better dancer. Incidentally, watching this scene without sound reveals the indefinable grey area: his moves are by turn fluid, fascinating and awful.

The more complex reason is that the movie is pure fantasy. Nostalgia isn’t reliable because it’s open to revision, even when it fixes the injustices of high school and puberty.

Side note: the lessons of Rex Kwon Do

If the school dance foreshadows the final dance-off, so does the film’s beginning. When Napoleon and Kip sit in on a martial arts lesson, Napoleon internalises Rex’s teaching:

Rex is a fraud, by the way – but his system signposts the whole movie. Napoleon finds a buddy (Pedro) and hones his sharp fashion sense (OK, it’s subjective). The dance finale is pure self-respect and quiet confidence.

Napoleon Dynamite inspects the weirdness of growing up through the lens of fantasy. This would account for the story’s charming but delusional optimism.

Pedro wears a wig to school and isn’t bullied for it. His cousins look like thugs, yet always appear at exactly the right moment to save nerds. Kip’s internet date really is a model who adores him. Napoleon learns to dance from a video tape and, five minutes later, wins a talent show. And so on.

We might love the film because it’s so offbeat – but it’s offbeat because it’s filled with things that rarely happen in reality.

However, details in the opening credits suggest the story actually takes place during the 2004-2005 school year. Hence no smart phones – and Kip uses dial-up internet, paid by the minute. Rico also looks back to 1982 as a golden year he’s desperate to return to.

Settings and dialogue are sparse, too. This may partly reflect the budget and speed of production, but also ensures we see very focused, tightly cropped or staged scenes (compare Edward Scissorhands). Even in sweeping landscapes, there’s typically only one or two characters or cars.

As a result, the details that most stand out are bizarre. Pedro wears a bad wig because he’s impetuous; so does Rico (because he can’t bear getting older). The photos of Kip and Napoleon on grandma’s wall are likewise hilariously bad and brilliant.

Fantasy fixes real-life injustice, and smooths imperfection. Similarly, the film skips over some notable gaps. Kip and Napoleon’s parents aren’t around. We never see Deb’s, either. And until Pedro comes along, it doesn’t look like Napoleon has any friends.

Part of the film’s charm is that Napoleon’s pay-offs are pretty low-key. His friend wins the election. And while Napoleon ‘gets the girl’, rather than riding off into the sunset, they seal their friendship with a game of chain-ball. Which is what that game’s called. Probably. In prison.

Incidentally, while the film appears to avoid the usual romantic resolution, Kip and Lafawnduh’s marriage happens in a post-credits Easter egg. Napoleon even rides in on a white horse.

This isn’t the only happy ending. Uncle Rico reunites with his wife (presumably, unless she’s just a passing cyclist). Grandma comes home. Pedro gets the presidency, and a party. It’s good times all-round.

Despite its episodic story structure, of course the film still ends with resolution. And in keeping with its fantasy stylings, those resolutions aren’t necessarily earned – but they still work.

The major storytelling departure is that most characters are no different by the end; they’re not transformed by their experiences. Kip finds himself (and his soul mate), of course, and there are signs Rico is willing to embrace the present – vulnerabilities and all.

Pedro, Napoleon and Deb, though, are pretty much the same people. The underdogs get their day in the sun, but they don’t change themselves to fit in. In the end, that’s the film’s biggest subversion and success.

Heat (1995): talking about love without saying it