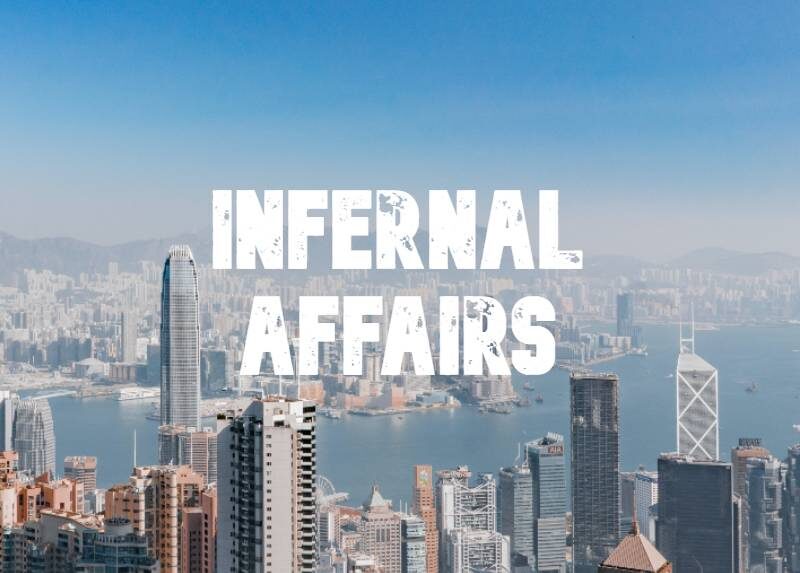 Later re-made as The Departed, Infernal Affairs outdoes Shakespeare for betrayal and the bloody route to the top.

What is Infernal Affairs about?

He reasons this gets him an inside man feeding him intel, plus an extra layer of protection for his racketeering. Unfortunately, senior police officials have the same idea: they send an undercover cop to join Sam’s gang at the same time.

Both the cops and gangsters know there’s a mole in their team – they just don’t know who. Meanwhile, both moles want out, but as the wire tightens it gets harder to play the game and stay alive.

This article unpacks the 2002 Hong Kong film, Infernal Affairs (Mou gaan dou), which Martin Scorsese remade in English as The Departed. Reading past this point will give away what happens in both movies.

Why is it called Infernal Affairs?

The title is a play on Internal Affairs (IA). This is the police department that investigates corruption and wrongdoing by other officers.

While the plot sees dirty cop Inspector Lau (Andy Lau) promoted to IA, there’s more to it. The title also refers to the way Lau and his counterpoint, Yan (Tony Leung), are trapped by their fake identities.

The film’s opening credits back this up with hellish flames and grotesque statuary. And then there’s the title quote, which describes the eight hells of Buddhist theology:

“The worst of the eight hells is called Continuous Hell. It has the meaning of continuous suffering. Thus the name.”

Both Lau and Yan are trapped in a circle of continuous suffering but, as the film also quotes (this time in the closing credits):

“According to Buddha, “He who is in Continuous Hell never dies.”

Yan, of course, does die (one of cinema’s true surprises, and just as shocking in The Departed). It may be a brutal end, but it’s also his release from ‘continuous hell’. His official funeral is further recognition that Yan is ultimately a good guy, and worthy of redemption.

Inspector Lau, meanwhile, faces a question at the start and end of the movie. That question is, who would want to trade places with a man like Yan? Both times, Lau answers, “I do”.

As a young man, this is Lau’s way of saying he wants out of the life Sam has chosen for him. The second time, at Yan’s funeral, speaks to the living hell that Lau remains trapped in.

Keung’s cop game lays out the rules for sorting friend from foe within the film’s universe. The game takes on extra significance because Yan really is a cop. But it also has deeper meaning because both Yan and Lau ‘play’ at being cops throughout.

Yan reveals he’s a cop as a means of getting closer to therapist Dr Lee. Lau states he’s a cop when he exits the elevator at the end of the film (i.e., in order to escape). Both men are cops, but both are also gangsters – all at the same time.

For most of us becoming ‘who we really are’ is a lifelong journey, and an open-ended question. In Infernal Affairs, Lau and Yan are handed ready-made identities. Each has to learn how to balance this with other masks, as well as the fragments of their true selves.

It sounds dizzying – and is. Neither character is sure of who he is any more, or if he’s the hero or the villain. And the tragedy is that both are pinned to an existence chosen by and for the benefit of others.

i. The police mole

Yan has had enough of subterfuge. He thought he’d be undercover for three years but it’s been almost 10 – yet even he isn’t aware of how destructive this is. When SP Wong (Anthony Wong) gives him a watch as a birthday present, Yan doesn’t know what to make of it: he thinks it’s a spy cam.

This illustrates how isolated he’s become from social traditions. Consider too how Yan’s family figures are all stand-ins: Wong is a father figure, while Dr Lee is a stand-in love interest. There’s a chance Yan has a child, too, but doesn’t even know it.

Yan struggles most with his gangster alter ego, going so far as confessing to Dr Lee that he’s really a cop. This is perhaps the most meaningful thing Yan can say, because being undercover has robbed him of conversation, intimacy and even language.

Instead, Yan communicates via Morse Code – a striking symbol of how he is a possession (of the police department) rather than a free man. He doesn’t have free speech … he doesn’t even have speech.

Ultimately, his clash with Lau is a battle for true identity, i.e., freedom. This is what Yan demands when they meet at the end of the film, when he asks to be allowed to live as a “normal man”.

Lau’s response to the question at the start and end of the film (who wants to trade places with Yan?) hints at his struggle with undercover life. Other than this, he’s inscrutable – and it falls to girlfriend Mary to reveal his inner turmoil.

“I can write about a man with 28 different personalities,”she says of the novel she’s working on. Here Lau interjects “Me?”and is laughed off – and yet Mary goes on to describe his act perfectly.

Later she uses the novel to voice her (perhaps unconscious) unease. “The more I think about it, the more pathetic the main character seems,”she says. And then, mirroring the tension Lau faces, she asks, “Should I turn him into a good guy?”

Ultimately, the novel is a bust because Mary can’t figure out if her protagonist is a good guy or not. By this time, she’s speaking plainly about Lau, whom she now knows is double dealing.

If Mary gives voice to Lau’s struggle, we also see it through the symbols of ID. There are several shots of Lau looking at his police ID badge (and Wong’s). He holds his badge up at the end the movie to prove he’s a good guy.

He and Yan even exchange names at the very start of the film, oblivious to who the other is. And Lau almost draws attention to his subterfuge when he pretends to be an attorney, once more changing his identity to mislead others.

Lau also pushes his identities onto other characters for the same ends. He tells the other cops, “Look, there’s a triad member” – when really he is. And he re-casts Wong as a corrupt cop, thereby causing his death.

As Yan and Lau juggle multiple identities each is increasingly concerned about whether they are the hero or the villain.

Yan struggles with this most openly. He asks Dr Lee what she thinks of him, adding, “Do you think I’m a good guy or a bad guy?” If Lau wonders the same thing of himself, it’s up to Mary’s meta-narrative to spell it out.

Later, when Mary discovers he’s a double agent, Lau promises to return Yan’s identity and make things square. This may even be what he intends but then Inspector B – the second mole – shows up. It’s a pivotal scene, and the source of the film’s shocking twist.

Inspector B shoots Yan just moments from the end of the film, and is then killed by Lau. His presence ends Yan and Lau’s bid for freedom. One is dead, and the other is locked into gangster life (or perhaps promoted within it).

Speaking of which, it’s telling that much of the film takes place on various rooftops. It makes for a great contrast with the film’s dark underbelly – of murder, betrayal, drug deals and corruption. It also represents the high stakes of being undercover, perhaps best illustrated by Wong being thrown to his death. The deeper the lie, the further there is to fall.

It also illustrates once more this tension between good and bad, the dark and light. Lau asks Yan why undercover cops like to hang around on rooftops. Yan tells him, “unlike you, I’m not afraid of the light.” Consider too that when Yan is killed, Lau goes back down (in the elevator), literally and figuratively returning to the depths.

Who is the real mole?

The film’s biggest misdirection is the idea that Yan and Lau only have to fear each other.

We see this in Keung’s game of Guess the Cop. He tells Yan that someone doing something without paying attention to it, and watching them instead, is a cop. On these terms, everyone appears to be a cop (which may be true, because the gang is under heavy surveillance).

Of course, the irony is that Yan really is a cop. But what he and Lau don’t see (and neither does the audience) is that there’s more than one mole.

Keung is an ‘almost mole’. He’s not a cop [this is made more ambiguous in The Departed], but he cares about saving Yan’s life. When he has the opportunity to betray Yan, he chooses instead to protect his double identity.

There’s nothing ambiguous about Inspector B. As Lau’s shadow double, he’s so deep undercover that neither Lau nor the audience see him coming.

B provides Lau’s means of escape at the end of the film, when he reveals he too joined the police force on Sam’s orders. With hindsight, this also means he’s present in several of the film’s key scenes. For example, he appears to broadcast the changed radio frequency during the first police sting.

He even subtly warns Lau that he has overlooked an important detail during his bogus interrogation as an attorney: “How did you know it’s Mo’s hideout?”

Keung and B are counterparts, too, in the way that Sam views and uses them as slightly stupid and disposable. But away from Sam, both provide an exit for the character they look up to: Yan and Lau respectively.

“What thousands must die so that Caesar may become great?”

If all stories are driven by a conflict which must be resolved, the battle here is for identity. Or rather, for the freedom to choose.

Sam sets this out at the start of the film when he says, “This game is about taking fate into our own hands” and “You can choose your own future”. But of course, neither Lau nor Yan have this choice.

Instead, both men are sacrificed “so that Caesar may become great”. This is true of Sam, who is prepared to murder to get the power he craves. But it’s also true of SP Wong, who leaves Yan hanging in limbo for a decade.

It’s no accident that both Wong and Sam are father figures. Wong lives up to the spirit of this relationship, seeming to sacrifice himself so that Yan can escape. Lau and Sam are father-and-son more as a business transaction (consider the code they use, such as when Lau phones home to tell Dad he won’t be home for dinner). When the opportunity is there, however, Lau is ready to kill Sam.

Like this moment, the film’s ending is ambiguous. Lau says he intends to do the right thing, only to be offered a new opportunity. Lau may finally be free of Sam – or he may just be the new Caesar, standing taller for the bodies of the men he sacrifices along the way. The king is dead – long live the king. For now.