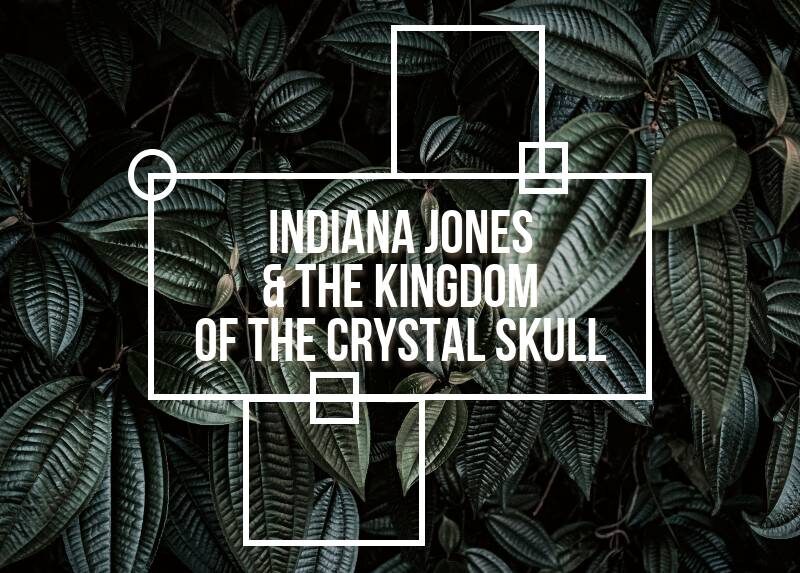 The Kingdom of the Crystal Skull sees Indiana Jones hunting for arcane and ancient knowledge. But a little learning can be a dangerous thing …

What is Indiana Jones and the Kingdom of the Crystal Skull about?

Nevada, 1957. Russian soldiers searching for classified US archaeological remains kidnap explorer Indiana Jones (Harrison Ford) to get what they want.

Indy narrowly escapes, only to land in another scrape. Tearaway teen Mutt Williams (Shia LaBoeuf) reveals a mutual friend is missing, along with Mutt’s mother. With time running out – and Russian agents closing in – the pair head for South America on the trail of a mythical city of gold.

Indiana Jones and the search for knowledge

The fourth film in the Indiana Jones franchise is all about the search for knowledge; in fact, it’s what the series is built on.

Indy’s character celebrates nerdishly obsessive expertise. But as we have a somewhat complicated cultural relationship with know-it-alls, Jones is actually composed of two identities. One is a bookish professor, the other a whip-toting action hero.

It’s the classic superhero set-up, right down to the spectacles Professor Henry Jones wears but alter ego Indy doesn’t need. There are similarities with Clark Kent and Superman, of course, but also Good Will Hunting, which off-sets academic genius with aggression.

As per each film in the franchise, Indy is on a quest to unlock hidden knowledge, which in turn leads to mythical treasures. However, these objects of rare and destructive beauty are always fleeting.

In Raiders of the Lost Ark (the first film in the franchise), the US government hides the Ark of the Covenant in a remote warehouse … seemingly unconcerned by its ‘nuclear’ powers. In Crystal Skull, all evidence of alien skulls, the city of gold and a portal to other worlds vanishes into space and under water, lost once more to eternity.

Indy also makes explicit the overlap between the twin desires of wisdom and wealth:

“The Ugha word for gold translates as ‘treasure’. But their treasure wasn’t gold, it was knowledge. Knowledge was their treasure.”

Perhaps they’re not so different. Knowledge, like gold, can be in frustratingly short supply. And to control either is a potent source of power.

If discovery for the good of humankind sounds a fine thing, well, it’s never that straightforward.

Like the Nazi predecessors of previous films, Russian leader Irina Spalko (Cate Blanchett) doesn’t realise knowledge must be earned. And sure you can stand on the shoulders of giants but don’t be surprised if you fall off.

Essentially, Spalko wants to copy Jones’s homework but cheating leaves her dangerously ignorant. “I want to know everything!” she says, before her brain melts under the weight of infinite knowledge. Perhaps it was algebra.

Professor Oxley (John Hurt) skirts the same fate. His obsession with finding the alien skulls, along with forced exposure to their power, drives him insane.

This is ambiguous, however, at least in the way his ‘insanity’ overlaps pop culture representations of genius: the feverish, scribbled notes, for instance (A Beautiful Mind, Shine etc).

Ox is spared destruction because he understands the skulls in a way Spalko doesn’t – and can’t, because she hasn’t done the work. Similarly, while Spalko asks for ultimate knowledge, Indy runs the other way. He knows enough to understand “there are more things in heaven and earth, Horatio” (Hamlet).

The franchise returns repeatedly to the human quest for knowledge hidden by gods and governments – yet concludes here that perhaps not everything is ours to know.

Not everyone is cut out for wisdom. In The Kingdom of the Crystal Skull, the hierarchy is one of deserved Vs undeserved knowledge.

Naturally, Irina Spalko is undeserving. Double-crossing Mac (Ray Winstone) isn’t even in the running – he only cares for gold.

However, the hierarchy also runs along cultural lines. Indiana Jones is a hunter of antiquities. He rescues artefacts from supposedly savage tribes who can’t possibly understand the value of what they’ve been guarding for centuries.

Once looted liberated, these treasures are displayed in glass cases for Westerners to admire, or locked away for safe keeping or studying. The fact they’re culturally significant as gods, heirlooms or ancestors is a trifling matter [comedian James Acaster calls it the finders, keepers defence].

The film dodges the complexities by highlighting the savagery of the local custodians, setting them up as antagonists and indistinguishable from the Russians.

In the graveyard in Peru these antagonists are more dead than alive (the skull masks), the implication being we shouldn’t feel guilty about looting from zombies.

In Akator, they’re again seen as less than human. Here, they’re so primitive they can’t be reasoned with. They can only be controlled – like the ants – using the skull. Shortly afterwards, Spalko’s troops massacre them.

Incidentally, this plot device secures Indy’s escape, as presumably otherwise they’d be waiting for him on the way out of the temple.

In The Last Crusade, the custodian is a knight – a Westerner and servant of the Christian god. He fares quite differently and distinctly to the franchise’s various indigenous populations.

Indy’s purpose is to reveal things which are hidden: knowledge, aliens, dead languages and maps. But in fact, the film is also full of hidden identities.

The big one is that Indy and Mutt don’t know they’re related. Indy thinks Mutt is the side kick for this adventure, until he’s revealed as the son (AND side kick, to be fair).

It also repeats to a lesser degree with Mary (Mutt’s mother) and Marion (as Indy knows her). The subtle misnaming is a way of reintroducing Ma/Mary/Marion later on as a plot twist and franchise resolution – more of that below.

Shifting identity gets a bigger platform in Mac’s character.

Mac plays the side kick at the start of the film, until he betrays Indy. He switches sides again later on saying he’s actually a triple agent (CIA pretending to work for the Russians).

It’s another bluff, though, because he’s still working for the Russians. So does that make Mac a quadruple agent, or knock him back to double agent? Neither and both. He’s not working for the Americans or the Russians, he’s only out for the gold. Hiding his self interest is the real deception.

How do we spot the bad guys?

The Crystal Skull offers a basic binary system: America Vs Russia. It’s not really a choice, though, because the film makes its position pretty clear.

For instance, why is the atomic village a replica of suburban America rather than an enemy location? Perhaps it’s to remind the audience what’s at stake: the destruction of the American way of life, complete with consumer mod cons and picket fences.

There’s a larger narrative significance to this if you consider the film has to convey Cold War tensions to an audience largely too young to remember it for real.

More ambivalent is the echo of the atomic bombing of Japan by US forces in August 1945. Spalko also references this when she says, “Now I am become Death, the destroyer of worlds” (via Oppenheimer and the so-called Manhattan Project).

Either way, seeing the devastation shows why Indy’s quest matters … though it doesn’t quite align with the Ark of the Covenant in a warehouse up the road, and which could obliterate us all in a second.

Finally, while Indy stops short of grave robbing Orellana’s knife, Mac has no such qualms – and the plot pays him back in spades.

Why are they looking for skulls?

Actually, not everyone is hunting for skulls – at least, not initially:

So, why skulls at all? They’re a visual representation of their innate value in the film, i.e., the seat of knowledge.

And crystal skull mythology in particular, like the Roswell alien the film also references, are modern mysteries that we create and maintain in the same way the earliest societies had their religious origin stories.

This largely fits with the franchise’s previous quests for mythical artefacts that surpass human ability. The Ark of the Covenant, Shiva’s stones and the goblet of Christ: all have their supernatural powers and sky-dwelling creators. Our ancestors saw the hand of god, we see aliens.

In this sense, The Crystal Skull is a natural and predictable evolution of the franchise, which begins with the Old Testament and ends here with a modern reappraisal of creation myths. As in 2012 horror Prometheus, for instance, it has aliens play a role in the evolution of our species.

The alien ending may be largely disliked, but it’s in keeping with cinema’s trend for modernist rewriting of creation stories and biblical lore.

How The Crystal Skull resolves the franchise

Some storytelling functions aren’t just about plot and audience perception; they’re also about a film’s internal universe. In The Crystal Skull, some plot points resolve journeys started in earlier films.

It’s nostalgia, in other words, and it reminds us why we’re invested in Indiana Jones at all (though arguably it wasn’t quite enough here, based on lower IMDb ratings for this episode of the franchise).

So, how does The Crystal Skull echo the earlier movies?

Incidentally, the above also reveal the character pieces that the series relies on. There’s the side kick, the love interest, the double crosser, etc.

Such neat resolution seems premature now that Indiana Jones 5 is a thing. Nonetheless, The Crystal Skull wraps up a story begun in 1981 – not only through nostalgia, but by giving Indy the son and wife he let slip through his fingers the first time round.

True, this somewhat implies a final ending because marriage and family are often a full stop in storytelling. Still, if you string enough full stops together any sentence or story doesn’t end, it merely pauses …

Indiana Jones and the Kingdom of the Crystal Skull (2008), directed by Steven Spielberg

Ambiguity of existence: Do Androids Dream of Electric Sheep? explained