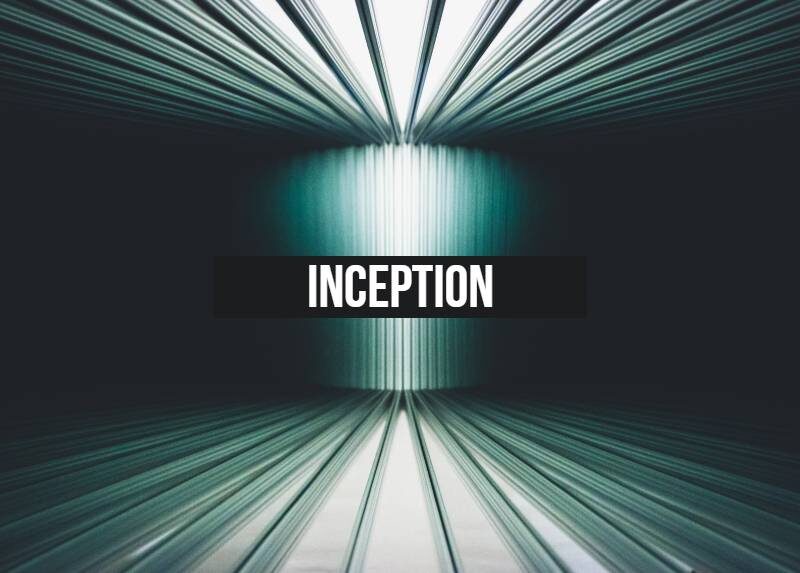 What is Inception about?

As an ‘extractor’, Cobb (Leonardo DiCaprio) uses dream-sharing technology to infiltrate a person’s subconscious and steal their most guarded secrets. Then business man Saito (Ken Watanabe), asks him to do the opposite – to plant an idea.Cobb’s team sets up a reverse heist but they each risk being trapped in the dreamworld … or dying there.

Inception (noun): the starting point of an institution, endeavour or activity

“You’re asking me for inception,” Cobb tells Saito. “I hope you do understand the gravity of that request.” What Saito is asking for can change a man – it can come to define him.

Earlier in the film Cobb announces that ideas are most resilient and resourceful kind of parasite:

“Once an idea’s taken hold in the brain it’s almost impossible to eradicate. A person can cover it up, ignore it – but it stays there.”

In this story inception is the act of planting ideas, with the film recounting one particular attempt to jump-start inspiration.

But the story is also about the consequences of manipulation. Cobbs backstory eventually reveals he’s done this before … and the guilt is destroying him.

Inception is famous for its layers of meaning and ‘dream within a dream within a dream’ concept. It’s not such a leap to imagine that what Cobb thinks he’s doing to Robert Fischer (Cillian Murphy) is what’s being done to Cobb himself.

How the plot unfolds

Assuming the film does actually start in what we think of as reality, this is what we find:

As a heist movie, each member of the team has a very specific role that defines their actions and scope in the story (see also The Great Escape). Saito is the exception, because he’s the outsider.

The others say they have “no room for tourists” but Saito comes along for the ride anyway. While he plays a significant role in pulling off the heist he has no predefined role.

What the plot is hiding

Here’s what also happens in Inception:

Early in the film, Cobb hints that he knows inception can be done.

Later we learn that he did it to his wife, Mal (Marion Cotillard). Trying to snap her out of her attachment to the dream world, he breaks into her subconscious and plants the idea that her world isn’t real. This forces her to wake up.

But the interference backfires. Once awake Mal thinks she’s still dreaming. Eventually she kills herself to return to the reality she thinks is still out there.

Cobb’s guilt and regret consume him. He can keep neither his dream world, nor his memories of Mal, clear of reality. Mal – his subconscious – constantly breaks through.

“You think you can just build a prison of memories to lock her in? You think that’s going to contain her?”

It’s interesting that Ariadne calls Cobb’s memories a constructed prison. When Cobb explains dream architecture to her he explains the need to: “build a bank vault or a jail, something secure”.

While the heist is disguised as breaking into Fischer’s subconscious, it’s also a way for Cobb to face his own guilt and finally release Mal.

It’s only by returning to limbo – supposedly to rescue Saito – that Cobb can find his way back to reality. Limbo is Cobb’s bank vault, and the entire plot is a means of getting Cobb back there.

There are tons of similarities with this in Shutter Island, also released in 2010 and starring … Leonardo DiCaprio

Inception is built around repetition. Plots mirror each other, and characters say the same lines several times but in different locations.

The main trope is the idea of regret – or, rather, no regrets. Saito and Cobb discuss several times the idea of rejecting the fate of becoming “an old man, filled with regret, waiting to die alone”.

The dreamers use the Edith Piaf song Je Ne Regrette Rien (‘I regret nothing’) to wake them up at each level of the dream world. The film’s soundtrack uses the same song massively slowed down (something that’s revealed at the very end of the closing credits).

It’s as if someone is giving Cobb an audio clue throughout the entire film … it’s time to wake up and stop dwelling on regret.

Fischer’s moment of realisation comes when his father dies (or, technically, when Fischer re-imagines his death in the dream world).

Similarly, one level down in limbo Cobb re-imagines a death-bed scene with Mal, finally ready to make peace with what happened:

“I couldn’t make you real. I’m not capable of imagining you in all your complexity and… perfection. As you really were. You’re the best I can do. And you’re not real.”

But if Inception really is an intervention story, it’s not clear who ultimately pulls the strings.

Ariadne, as the newest recruit to the squad, plays the part of the ‘audience’, in that Cobb explains to her (and therefore to us) how the technology works.

Through her scenes/speeches, we learn how dream heists work, the significance of totems, and Mal’s hold over Cobb.

It’s strange for a neophyte to be quite so knowing. Ariadne even becomes something of a psychologist to explain how Cobb’s subconscious is manipulating him.

Ultimately, she also spells out what they’re doing to Cobb:

And Cobb isn’t alone. He has a whole cast of characters guiding him through the maze. As with her mythological namesake, Ariadne provides the thread that leads Cobb back to reality, just as it did for Theseus.

Not a heist but an intervention

The film, while ambiguous at every turn, suggests Inception is Cobb’s intervention in a number of ways:

Other theories about Inception