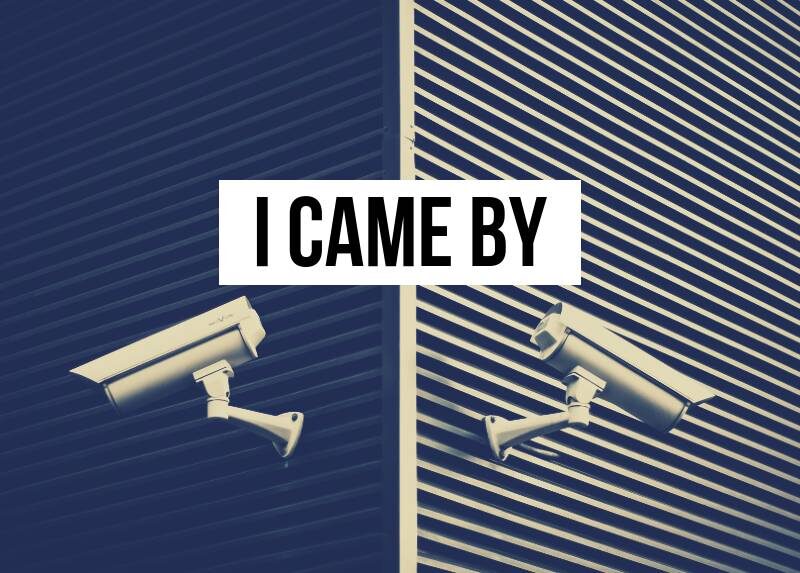 Stories from the margins, invisible men and a touch of Dickens? How I Came By weaves social fable into basement thriller.

What is I Came By about?

Toby (George MacKay) and Jay (Percelle Ascott) are graffiti taggers with a social conscience. They haunt London’s elite by night, breaking into wealthy homes to spray their catchphrase in glorious technicolour: “I came by”.

When Jay ducks out of the operation, Toby vows to carry on as a lone urban avenger. Then he breaks into the home of a former judge, only to learn that no good deed goes unpunished.

This page unpacks class, otherness and the meaning of graffiti in I Came By, by British-Iranian director Babak Anvari – with spoilers.

I Came By pulls an early and audacious twist. Seemingly about Toby, a feckless 23-year-old who thinks he’s Robin Hood with an attitude (… Robin Hoodie?), the plot bumps him off in the first act. It then switches to mum Lizzie, only to kill her off in the second act.

This is Hitchcock’s trick in Psycho, lifted from Robert Bloch’s source novel and given extra oomph by the death of its big-name star 47 minutes into the movie (incidentally, Toby also dies at around the 40-minute mark).

I Came By runs the gag not once, but twice – and is brutally disorienting for it. We’re most invested in Toby and Liz (Kelly Macdonald), and know most about their lives – only for them to disappear.

There are a couple of things to note here, though. First, there’s the movie’s message that privilege is a whole other world. It looks a lot like the world we all share, but has private, exclusive spaces and a shared language (accents and vocabulary, but also codes of dress and behaviour).

When Toby finds a secret room in the basement, he opens a door – not to Narnia, but to that other world. Opening it unleashes the horrors of human nature … and the knowledge that Hector can do what he likes in the outside world, too. That’s how privilege works.

And, like privilege in the real world, those at the bottom pay the highest price.

I Came By is all about invisibility. Or, rather, different ways of not seeing.

Former High Court judge Hector Blake’s camouflage is wealth and breeding. He’s been to the right schools and has the right connections, accent and skin colour … when others suspect him of murder, the accusations don’t stick.

Hector (Hugh Bonneville) wears his privilege as a mask, a second identity that lets him get away with murder. It’s a strategic choice, but one that plays into social conditioning about class (accent bias is the tip of the iceberg).

His victims are invisible in ways they don’t get to choose. Hector keeps them in his basement so the world can’t hear them scream, but the irony is these men are already unseen and unheard.

They’re all Parsi asylum seekers, gay men cut off from their families and who fall between the cracks of the refugee system.

I Came By wears a mask of sorts, too. It presents as thriller but, in the end, is more social fable. The story it’s really telling is the one that book-ends the film:

In between lies systematic brutality and ethnic cleansing – yet its victims remain at the edges of the narrative. This film is about them, but is told through more ‘relatable’ characters. In the end, they exist in the story the same way they serve Hector’s purpose: as nameless victims of torture.

Whether oversight or indictment, the film’s take on marginalisation is notable. Even its heroic characters live in the shadows.

By comparison, working-class voices are often missing from big-budget cinema, or gentrified to be more acceptable. Even Charlie Bucket has perfect vowels, manners and morals (2005’s Charlie & The Chocolate Factory), aligning with notions of the deserving poor.

Others are all-trait, i.e., aggression, stupidity, saltiness or hilarity. Sometimes erasure is baked into the story, such as My Fair Lady’s class makeover.

I Came By bucks the trend, at least on paper. Toby and Jay are working-class men, which makes them both unseen and hyper-visible at the same time.

Jay has it particularly tough. When Lizzie asks him to help her break-in, he refuses because, as a Black man, his punishment will be greater than hers (see Full Fact for context). When he hands Hector to the police, he does it anonymously to protect himself. This is the opposite of privilege.

Still, the contradiction balances his self-delusion. He sees himself as Robin Hood, yet apart from mugging off a commuter, doesn’t actually redistribute any wealth. Instead, he breaks into apartments to leave the equivalent of a “sorry we missed you” card.

Most significantly, the film unpicks the lie that rich people are our betters, and that respectability is a reliable indicator of morals or trust.

Why does Hector Blake kill?

Hector finds an easy target in society’s unfortunates, but what drives him to kill in the first place? Conveniently, his back story spiel breaks it all down for us.

Hector’s dad took pity on a young Parsi man called Ravi, inviting him to live with the family. Eventually the two became lovers, leading to Mrs Blake killing herself, and Hector being packed off to boarding school.

Years later, Hector gets revenge by beating Ravi to a bloody pulp, an experience he calls “so liberating”. So why stop there? He begins hunting men like Ravi, torturing them then burning their remains in his kiln.

About that kiln. Hector says he took up pottery to honour his wife, but it’s likely he deliberately had her sectioned. He fabricates the hobby to explain the kiln and the shelf that hides the torture chamber. That’s why the pots have price stickers; he didn’t actually make them.

Hector kills Toby and Lizzie because they get in the way, but he kills the others because he wants to. When he confesses to masseuse Omid (as foreplay to killing him), he talks about revenge as a catalyst. In fact, this is all kink, right down to being watched by his dad.

PS: having a painting of a family member watch over your murderous bonking spree is nowhere near as diabolical as beating a man to death.

Inevitably, the houses in I Came By come to represent their characters’ psychological states.

Liz’s cosy but cluttered home mirrors her dysfunctional relationship with Toby. Toby’s room is a cocoon of self-affirmation, where graffiti slogans and YouTube videos make sense of a disordered world.

Hector has two homes, natch. His pristine Dulwich home is the model of respectability, but it’s all for show. Above ground, it’s a performance of identity. Below ground, depravity runs free.

After killing Lizzie, Hector returns to his childhood home. Remember jilted bride Miss Haversham from Dickens’ Great Expectations? Like her, Hector’s home is frozen in time, preserved exactly as it was when his world fell apart.

Is this problematic? It implies Hector is trapped in childhood psychosis rather than making adult choices; that murdering is something that happens to him.

While trauma is a complex thing, it seems disingenuous to suggest a man who installs murder rooms in his various homes isn’t in charge of his actions.

After all, he’s able to perform the public role of a man who doesn’t kill. Like Miss Haversham, he has a choice about whether to stay frozen in time – and he embraces it.

Hector’s childhood surely belongs in a Larkin poem: “they fuck you up, your mum and dad. / They may not mean to, but they do”.

This isn’t so surprising: I Came By is all about how our parents shape us, for better or worse.

“I’m here to live their dream. That’s what a good son does. He completes his parent’s vision for the future.”

Hector rebels against his dad’s vision – albeit in a class appropriate way, which naturally means still being wildly successful. More significantly, he says he kills for revenge … though like the Haversham problem this downplays his agency in the act.

Surprisingly, Toby mirrors Hector. He masks his identity: literally, with a scarf, but also in the personae he wears around different people. He uses trespass and power (graffiti) to deal with grief. And for all his social conscience, he treats his mum badly – even hiding her TV remote to mess with her (gaslighting, actually).

Naz’s parents disown her when she gets pregnant (adding to the film’s frustrating reliance on extremist Asian parents). And with the baby on the way, Jay experiences the push-pull of parenthood from the other side. His conflict is how to break free of the past and be a good dad.

This certainly separates him from Hector. It also feels quite poignant in comparison with Lizzie, who never stops wanting the best for her child … but has no say in fate.

Side note: the prime mover

With Toby and Lizzie out of the picture, it eventually falls to Jay to get justice. What’s interesting about this is that – technically – he sets up their deaths.

The writing on the wall

What is graffiti for? Public art, act of rebellion, territorial pissing? In I Came By, graffiti is a signpost. It’s a dig at inequality, but also reveals Toby’s grief and isolation. By the end of the film, it functions as closure, again book-ending the film by mirroring its opening scene.

If spray-painting posh homes is a lazy kind of rebellion, the finale transforms it into activism and social justice (though compare also serial killer calling cards).

Hector Blake has fine art and elephant tusks; Jay and Toby have graffiti – the art of the streets. All are totems of hierarchy. Similarly, Hector’s murder weapon is a cricket bat, with its class implications.

In the end, though, the graffiti points back at us. I Came By can be read as metaphor for attitudes to asylum seekers, their fate within the justice system and our blindness to their existence, exploitation and abuse.

For those who grow weary of helping the vulnerable, or who distinguish between the deserving and undeserving poor, Hector’s torture chamber is an unspeakable convenience.

Whether the film entirely works as either thriller or metaphor is an open-ended question. Either way, it leaks a certain truth about the things we choose to see, our tolerance to and fetishisation of Otherness, and the hypnotic effects of class.