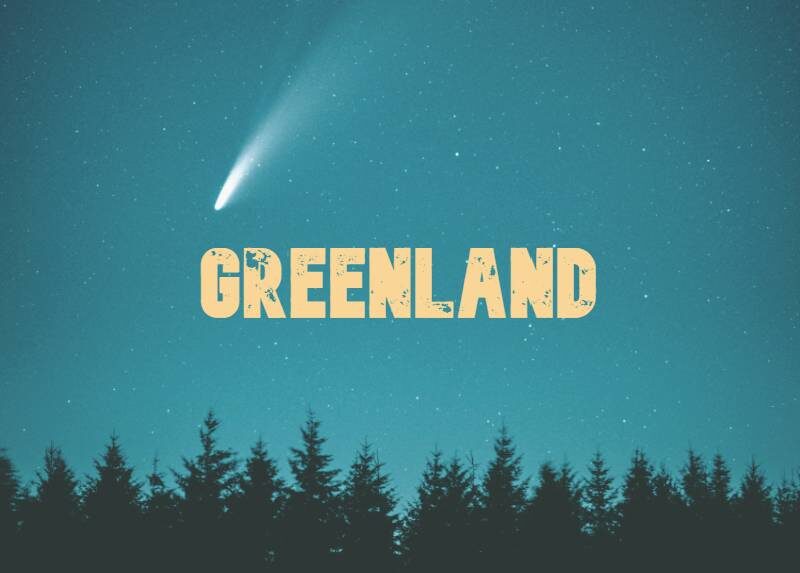 With Earth braced for impact from a planet-killing comet, one family races to reach safety in time.

What is Greenland about?

Like everyone else on Earth, the Garrity family can’t wait to watch a deep space comet brush past the Earth’s atmosphere. But during the event’s livestream they learn this is no flyby: the comet’s about to crash, ending the world as we know it.

Luckily the Garritys are chosen for emergency relocation. But with so many others left behind reaching the ark becomes a terrifying battle that sees the family split up, attacked, and scrambling for safety.

This article explains themes in 2020 disaster movie Greenland – with spoilers.

Do you watch disaster movies to see the hero saved, or to see others perish? Hopefully it’s mostly the former … but chances are it’s a bit of both.

If no one died in disaster movies, the saving wouldn’t mean so much. Trial by fire proves the protagonists are worth saving, and thus worthy of audience attention.

This is especially true of Greenland. Like other disaster movies (especially those that feature planet-wide destruction), it’s rife with religious overtones.

In Knowing, angelic aliens lead children away to heavenly salvation. In Greenland, muscle-bound dad John Garrity (Gerard Butler) does everything he can to get his family to the promised land before doomsday. At first this looks like a sure thing when the Garritys get a place in a top-secret underground bunker.

In the Bible, the Lord tells Noah to build an ark in preparation for a planet-killing flood. Apocalypse movies have embraced this idea and imagery (along with our obsession with end-times). From Deep Impact and 2012 to The Day the Earth Stood Still, arks – vehicles of salvation – crop up repeatedly.

The mechanism features in Greenland, too. Here, the lottery is the source of the movie’s main tension: who deserves a place in the ark? Who deserves to be saved?

Why are the Garritys special?

As a structural engineer, John Garrity has a useful job that can help rebuild society in the ‘after life’. His ticket includes wife Allison (Morena Baccarin) and young son Nathan (Roger Dale Floyd). Later, Nathan’s diabetes sees him cruelly bumped from the list.

As in Deep Impact, there’s a hierarchy to salvation. The lottery for ark places includes those deemed valuable to society. But it excludes those who are a drain on resources – the old, ill or otherwise expendable.

With the family now excluded, John Garrity must prove himself worthy of entering paradise. He does this in a number of ways:

The backdrop to all this is that other families aren’t as worthy of salvation. Some are unlucky because of age or job choice (keep that in mind when you next pick a career). Others have spoiled souls already: the couple who pass Nathan off as their son, for instance, and the man who tries to kill Garrity for his ID bracelet.

As with Deep Impact, the salvation hierarchy is key. In that earlier film, journalist Jenny Lerner (Téa Leoni) gives up her place in the ark because social and moral expectations insist her life as a single woman is worth less than that of a mother and baby.

This is another aspect in common with Greenland: all roads lead to love and family.

Why disaster movies are all about dads

The family unit is so central to human experience that we instinctively recognise what it stands for in movies: it’s shorthand for love and triumph and the human spirit.

It’s also a subtle social reinforcement of the moral worth of family life over the individual. Again, compare the fate of Deep Impact’s Jenny Lerner.

The family unit – real or imagined – has currency in disaster and destruction movies, and fathers are crucial to this. Perhaps this is because they’re an earthly counterpart to the spiritual father (God). It’s also an unavoidable association alongside the genre’s fixation with hell, heaven and apocalypse.

In 2012, dad John Cusack races to save his family from doomsday. In The Poseidon Adventure, Gene Hackman’s priest is the father stand-in (Catholic priests are called father). Dennis Quaid attempts to save both humanity and son Jake Gyllenhaal in The Day After Tomorrow.

In Greenland, Gerard Butler is the dad who must save his family. And like all these other fathers, he’s a fallen figure who has failed once and must now prove himself.

How similar are Greenland and Deep Impact?

Deep Impact (1998) is the broader film, with multiple plots and protagonists. Rather than being a reboot or straight copy, Greenland could be a subplot in the earlier movie. While Deep Impact sets up a whole backstory for the comet, Greenland jumps in at the ark lottery and follows through to the apocalypse.

Greenland also mirrors some of the other film’s plot devices and symbols, notably:

Why do the arks already exist?

If Greenland’s comet was only discovered a few weeks ago, how do the arks already exist? When John and Nathan are picking up party supplies, they even see the first rescue planes already leaving. Viewing Greenland in light of the Deep Impact timeline suggests some answers to this.

When journalist Jenny Lerner (Deep Impact) digs up a story about the mysterious ‘Ellie’, officials beg her to bury it. Lerner has actually stumbled across intel about an E.L.E – an extinction level event.

Presumably the world’s governments make a similar decision in Greenland. They hide the truth until the very last minute to avoid chaos, and to protect the evacuation plans.

The film backs this up with its bleak – perhaps realistic – prediction of human behaviour in the face of destruction.

Society falls apart within hours. Several of those facing destruction are willing to lie, cheat and steal their way into the arks. But there’s a reason why this can’t succeed…

What does the ending mean?

Greenland is about the end of the world. There’s fire and brimstone, and much gnashing of teeth. It’s about worthy and unworthy souls, and about the sacrifice needed to enter the promised land. It’s not difficult to see parallels with (especially Judeo-Christian) religious stories.

But rather than pure allegory – a story of heaven and hell – some of this is unavoidable because it’s a disaster movie. Religious symbolism is baked into the genre. And some of it is inseparable from human experience: we look for hope when things go wrong.

The Greenland ark is the Garritys’ last chance to survive. It’s presented as uninhabited, unspoilt land – an unblemished Garden of Eden. It speaks to colonial dreams of pure lands awaiting western expansion (conveniently forgetting the communities and ecosystems already there).

This idea of starting over features in many destruction movies. As modern societies struggle to make sense of the here and now, destroying everything and starting from scratch – with the wicked and unworthy left behind, no less – may appeal on a subconscious level. Again, disaster movies are as much about who doesn’t get in as who does.

While the film’s plot is about survival at all costs, Greenland represents a heaven-like state after the hell of apocalypse. The Garritys even experience a pseudo death, seeing their lives flash before their eyes when the comet hits. Unsurprisingly, these memories are solely about family goodness.

As the blast doors open we’re met with the sight of the destroyed planes of all those who didn’t arrive in time – those who weren’t worthy enough. It’s a stark, frightening scene, yet one interspersed with bird song.

As with the story of Noah’s Ark, the birds represent the continuation of life, and the hope of the human race. This is why we have disaster movies at all. They’re our modern myths, telling stories of terrible disaster, incredible daring, and how the human spirit will overcome.

Is the cop the real killer in Vertigo?