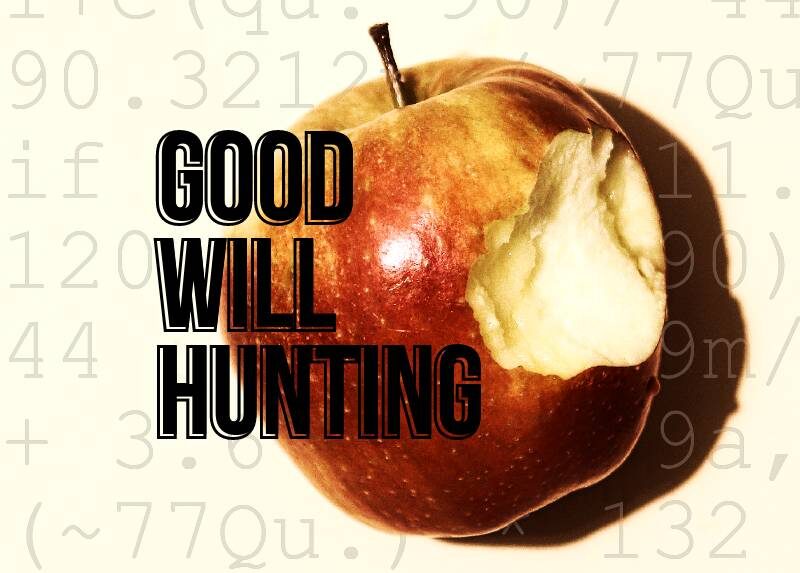 There are a couple of lottery tickets in Good Will Hunting. Only one is real. So what’s luck got to do, got to do with it?

What is Good Will Hunting about?

Will Hunting (Matt Damon) is a 20-year-old with a string of criminal offences to his name. He’s also a self-taught genius.

When Professor Gerald Lambeau (Stellan Skarsgård) discovers Will’s talent for maths, he ropes in psychologist Sean Maguire (Robin Williams) to keep him out of prison.

With Maguire his first stable influence in a long time, Will finds himself re-thinking what he wants from life – and whether he’s prepared to take a chance on getting it.

This article discusses themes, theories and explanations for Good Will Hunting – with spoilers.

Would you take a gamble on happiness?

There are a couple of lottery tickets in Good Will Hunting. Only one is real.

The real lottery ticket belongs to Sean Maguire. The first time we see it is when Maguire and Lambeau meet in a bar and argue about Will’s future career. The second time is at the end of the film, when the two men mend their friendship.

This ticket stands for the film’s central theme: life isn’t pain free, but you have to take a chance to move past tragedy.

Maguire and Hunting must both learn how to make this leap of faith. Maguire did this when he chose his wife over a legendary baseball game. But then she died and, deliberately or not, Maguire hid himself away from the world.

Will Hunting, meanwhile, bears the scars of physical and emotional abuse. Intimacy feels threatening, so he keeps it at arms’ length. He pushes away those who want to be close to him, and punishes those he feels slighted or intimidated by.

The film ends with both Maguire and Will taking a chance on a new kind of life, a new journey. Maguire goes travelling, while Will goes after Skylar, the woman he loves. Instead of letting their fears define them, each man gambles on happiness.

How privilege stands in the way

Lotteries are also emblems of social inequality, of the hurdles to levelling up by hard work alone. In a stacked race, luck is a valuable commodity.

Hence the film’s other lottery ticket is a concept: it’s the idea that some gifts can’t be bought. Will Hunting’s genius, for example, is a fluke. He’s a janitor at a prestigious university (MIT), a place he feels he doesn’t belong socially.

Those with privilege and power often use it to exclude others from the inner circle, for instance by keeping working-class people out of higher education.

But as Will points out, some of these students are wasting their time on an unremarkable education. They’re memorising the work of others, rather than learning to think for themselves:

“You dropped 150 grand on an education you could have got for a dollar fifty in late charges at the public library.”

Will doesn’t have any of the things that supposedly make us valuable (money, power, influence), yet he wins the lottery when it comes to intelligence.

This is a ticket to a better life, whether by choosing fame and fortune – as Lambeau wants – or by embracing a sturdier self image, as Maguire suggests.

At first Will isn’t interested in either. Then Chuckie challenges him: “You’re sitting on a winning lottery ticket. You’re too much of a pussy to cash it in, and that’s bullshit.”

Winning the lottery isn’t just about Will, Chuckie says. It’s the hope it gives all those who don’t have luck OR privilege. “You owe it to me,” he tells Will.

Chuckie adds that the best part of his day is picking Will up every morning. Each time a part of him hopes that Will will have left – no goodbye, no nothing – to make something of his talents.

This is how the movie ends. Chuckie, to a smaller degree, also wins the lottery, in that he’s granted the thing he claims to want most.

This film is peppered with scenes and characters that reflect class attitudes and antagonism:

Most plots rely on barriers. Without an impediment to overcome, there’s no story – and Good Will Hunting has more hurdles than the Grand National.

While class here represents a number of obstacles, is it troubling that it reinforces certain stereotypes?

Middle- and upper-class life – the life of books – is supposedly a life of higher intellect and nobility. Working-class life is about crime and, especially, aggression.

In fact, this kind of (masculine) working-class existence is fetishised in a particular character type: the working-class warrior.

This is the aggressive or loutish thug who must overcome or conquer this aspect of his character to fit in. Or, where he has intelligence, it’s matched by his ‘true’ beastlier nature. Consider:

Good Will Hunting has touching and hopeful things to say about being human – and about positive male relationships. And yet it does a curious thing in fetishising working-class characters, while also championing them.

Ultimately, though, this reflects the world of the movie – and it’s a world we have off-screen, too.

Society consists of unfair limits and arbitrary privilege. But, the movie says, all the money and breeding in the world can’t guarantee you’ll be the smartest fish is the bowl. Genes are a lottery, so luck is one more antidote to social inequality.

Is there a bad Will Hunting?

When we first meet him in the movie, Will hasn’t had much chance to be good, because he’s had all the tough breaks in life. ‘Good’ Will Hunting represents his potential, one he finally embraces at the end of the film.

‘Bad’ Will Hunting is the guy living with the effects of abuse, poverty and emotional trauma. He’s the one nursing a grudge since Kindergarten, and who uses it to beat another guy to a pulp.

Bad Will Hunting represents the lonely life that lies ahead if Will can’t learn to let people in, to accept that “you’re not perfect, sport”.

In the film, Will is given a question: which man do you want to be?

His choices are foreshadowed in Lambeau and Maguire. Both men see themselves as father figures to Will (and Will of course is missing a father). They also represent the two paths he could take; they are him 20 years in the future.

Lambeau uses his intellect to garner admiration. That’s why we hear so much about his medals and awards … and why we also see him flirt creepily with female students.

Maguire is more obviously an older version of Will. Both are from South Boston, and both have intellect matched by aggression. Maguire is the man who takes a chance on love rather than what others expect. And, as a result, he lives the more ‘authentic’ life.

This, ultimately is what Will wants, too. In the end, both channel aggression into bravery – because (as the film shows us repeatedly), fortune favours the brave.