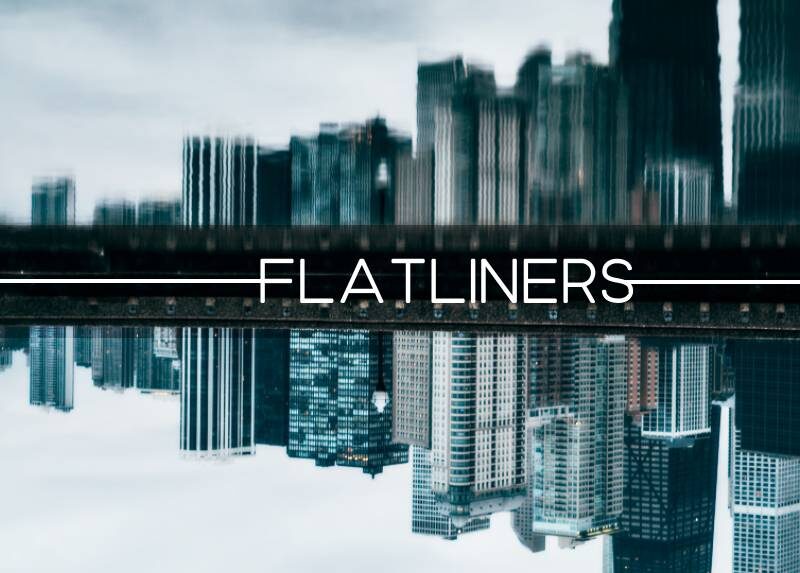 Cocky medical students play Russian Roulette with death to peek into the afterlife. But where do these ‘flatliners’ really end up?

What is Flatliners about?

Arrogant medical student Nelson (Kiefer Sutherland) wants to die in the name of science. This is no one-way trip, however. Nelson wants to stop his heart and ‘flatline’ for 60 seconds, then have his friends resuscitate him.

When he makes it back unscathed, the others want to go under, too. But Nelson isn’t telling them everything. When he visited the afterlife, he didn’t come back alone …

Flatliners sits somewhere between Mary Shelley’s Frankenstein and R. L. Stevenson’s Strange Case of Dr Jekyll and Mr Hyde. Like those Gothic horror stories, it’s about scientists who push the boundaries of the impossible … and sin against God and society as a result.

Here, Nelson Wright is the ‘mad scientist’ itching to discover what lies beyond death.

The Hippocratic Oath and similar ethics codes asks doctors to never intentionally cause harm. Nelson throws this out of the window when he devises an experiment that involves a form of guided suicide.

In some versions of the modern Hippocratic Oath, doctors promise not to play God – yet this is exactly what Nelson has in mind. He assumes control over life and death, not because of medical necessity, but because he can.

Incidentally, when David (Kevin Bacon) bends the rules – and loses his place on the course – he’s trying to save a patient’s life. Similarly, we see Rachel (Julia Roberts), Hurley (William Baldwin) and Steckle (Oliver Platt) training or working as doctors.

In contrast, Nelson is less established as a caring figure – which ties in with his ‘scientist’ persona and loose regard for medical ethics.

This comes full circle when he withholds information about the experiment’s side effects, putting his friends in danger on and off the operating table.

They’re not completely innocent either, though. Each ditches their ethics to take part in the experiment – and, ultimately, for similar reasons: curiosity, conquest and personal reward.

The flatliners want to know if near-death tales of bright lights and out-of-body experiences are true. But what they find appears to be hell, i.e., a place where they pay for their sins.

Resuscitation breaks them out of the bad place – but they can’t shrug off their punishment so easily. Their sins follow them into reality, where the consequences play out as hauntings instead.

So, what are their true-life sins?

Flatlining unlocks these guilty memories. Going to the afterlife sends them to a metaphorical Room 101. It’s a psychological space where each must face their greatest fear – or in this case, greatest guilt.

Their near death experiences look like hell – more of that below – but play out like intense therapy. In fact, given the liberal use of defibrillation, you could call it shock therapy.

In any case, each person becomes the victim of their own brutality, finally recognising the pain they’ve caused others.

Rachel is an exception here. Her insight is more like a lucid dream that reveals the truth: she wasn’t responsible for her dad’s death.

Either way, the end of the film reveals the hauntings are actually hallucinations.

When David rescues Nelson in the back of his truck, he’s alone and hurting himself. Billy doesn’t exist in any physical form, but instead represents Nelson’s subconscious struggle with remorse.

David breaks free of karma first. Note, though, that he doesn’t engineer this in any particular way. As an adult, he simply acknowledges the way he behaved was harmful, and makes amends.

Saying sorry to Winnie Hicks ends his suffering. Whether it makes any real difference to the girl he terrorised is a more complex question. Either way, the film’s take on repentance parallels the 12 Steps of Alcoholics Anonymous.

In contrast, when Nelson confronts Billy’s gravestone, he yells: “I thought I’d paid my dues!” He thinks being sent away to Stoneham School for Boys was punishment enough. As a result, he feels little guilt for what happened to Billy.

Interestingly, Nelson glimpses the key to relief the first time he flatlines. That night he dreams of falling out of a tree, foreshadowing the end of the film. This is his method of atonement: experiencing Billy’s fear and death for himself, and feeling true remorse.

This knowledge allows him to ‘wake up’, both to the truth and from death (when he dies on the table during his second trip, er, down under).

Hurley’s sins are more troubling. He’s written as a troubled young man who makes poor choices. His wake-up call, and release from hell, comes when his fiancée discovers his tapes and leaves him.

Yet this leaves Hurley’s true disgrace unsaid and unpunished. He manipulates women into sleeping with him; but without true consent, this is serial rape. He then videos them – again, without their permission – and keeps the tapes like a collection of creepy skin trophies.

The film underplays the sociopathy of this. So do his friends when they shrug off his womanising … including his attempts to manipulate their other friend, Rachel.

Traditional models of the underworld are reassuringly communal places, aren’t they?

That is, medieval illustrations of hell may be frightening, but at least they’re crowded. When Dante describes hell in his Divine Comedy, there are so many souls down there it’s like a house party. The damned, we’ve long held, suffer together.

We still cling to this idea of a communal afterlife. We say the good will meet again in heaven … then say the same about hell. As one meme puts it: “I may be going to hell, but at least all my friends will be there.”

Flatliners takes a more isolating – and frightening – view of damnation. When five medical students open a portal to the underworld, theirs is a very private misery. There are no flames … and no other sinners. Instead, each must relive the terror of past sins alone.

This vision of hell is more in keeping with our social beliefs, it has to be said, where success is often synonymous with individualism.

Take Nelson: he has a huge apartment but lives alone. He’s already rich, in other words. Meanwhile, the décor is so painfully modernist it won’t stand for a wardrobe (he has a clothes rail instead … and a rack of identical white shirts).

We can interpret Nelson’s minimalism as a red flag. Like Heat’s Neil McCauley, it suggests a lack of attachment to people, places or things. And that, as it turns out, is Nelson’s big flaw.

Side note: the death dream theory

Flatliners shows us four people whose near-death experiences make them re-evaluate their world view. But another way of inspecting the film is as Nelson’s death dream from start to finish.

It begins with Nelson going under and ends when he wakes up. In between, he inhabits a curiously empty world. He lives in a city devoid of bustling side walks, and doesn’t interact with anyone other than his friends.

Nelson’s haunting is the most developed, and his sin the most serious … and not just because he killed someone.

Flatliners ends with a pictorial nod to the Greek myth of Prometheus. In the myth, Prometheus steals fire from the gods to give to humans. His punishment is to be chained to a rock, where an eagle eats his liver for all eternity. It sounds a lot like the idea of eternal hell we’ve since inherited.

The film’s plot also shares the transgressive science (and reanimation) of Shelley’s Frankenstein – or The Modern Prometheus, to give it its full title.

Nelson’s experiment steals divine power and gives it to humans. The consequence is a raft of disturbing events played out through dream characters that represent parts of his personality.

The film’s tension comes from the clash of divinity and individualism. Seeing the characters as projections fits with Nelson’s extreme, flawed brand of individualism.

Each time one of these characters experiences death is chance for him to turn back, to do the right thing. However, only David – his socially aware superego – can admit wrongdoing:

And that’s when Nelson gets a second chance at life.

Like the deluded lovers in Alfred Hitchocks’ Rope, Nelson thinks he’s special. Intellect and daring make him an übermensch – a ‘super man’, or superior being. Also like Hitchcocks’ killers, he believes that gives him the right to murder.

After his first near-death experience, Nelson feels even more god-like. “Can you hear the traffic on the lake shore?” he asks David.

“Underneath that, there’s a hum. It’s the street lights. Even fainter, I can hear a kind of dragging sound. And it’s getting louder.”

Actually, it’s the sound of his conscience catching up with him, via his paralysed doggo, Champ – that’s the dragging sound.

So. Nelson goes looking for God in himself, but finds only his demons. The same goes for his friends – with the exception of David.

Nelson dies the underworld and, like the dreamers in The Matrix, it kills him for real. In dying, he achieves peace by accepting responsibility and remorse.

It looks like game over – until David intervenes. As an atheist, his prayer carries extra juice. For starters, his angry pleading for Nelson’s life finally acknowledges that God exists.

This scene mirrors what’s happening in the underworld at the same time. Like Nelson, David admits wrongdoing and shows genuine remorse … to God. Interestingly, what remains unresolved is whose prayer is answered: Nelson’s, or David’s?

In the cult of individualism, personal action trumps God, community and social duty. These students think they can peek into the underworld at a time that’s most convenient to them. But in breaking barriers, they discover new boundaries. Ultimately, a higher power still calls the shots.