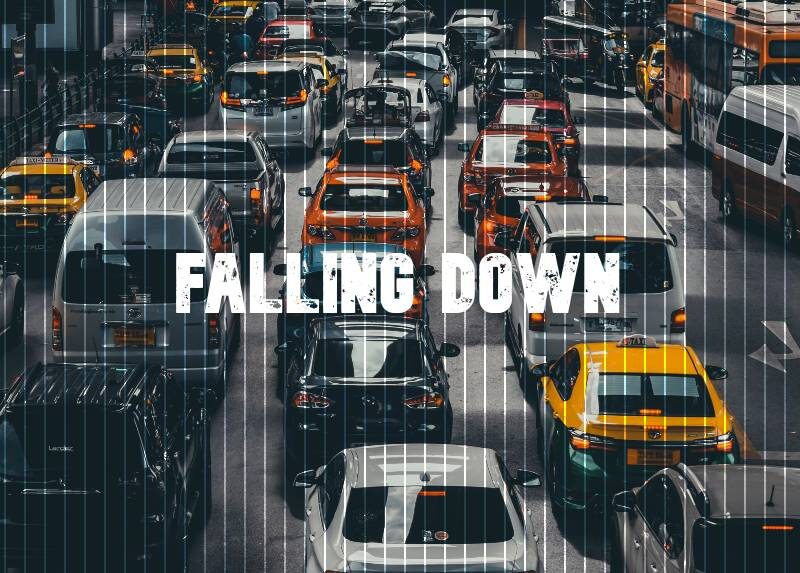 Falling Down’s lead character has no fixed name. That’s fitting for a story that repeatedly flips how we feel about its hero-turned-fallen-angel.

What is Falling Down about?

After getting stuck in a traffic jam on a sweltering day, an uptight office worker loses his cool. He just wants to get home to his little girl on her birthday, but as he crosses L.A. on foot he’s drawn into a spiral of rage, prejudice and shocking violence.

A man with no name

For most of Falling Down, Michael Douglas’s character doesn’t have a name – that’s how much the system has robbed him of dignity. Later we learn he’s lost his job despite years of service as a defence engineer.

Then he calls ex-wife Elizabeth (Barbara Hershey) but can’t get any words out. Not only has she taken away his daughter and home, she’s stolen his voice.

The film credits this poor, put-upon man as “D-Fens”, the same as his licence plate. But in fact he does have a name of his own: William Foster.

The ambiguity is apt for a story that repeatedly questions how we judge its protagonist. Anonymous or Everyman? Guilty or not guilty? Hero or villain?

Your answer probably depends on whether you recognise Bill’s world view.

Bill Foster is the man who fights back. He takes a stand for all the little people denied homes, jobs and “economic viability”. Except … he’s not really doing it for them.

Like Foster, Detective Prendergast (Robert Duvall) is exploited by his job, his wife and his colleagues. But while Prendergast continues to serve society despite its flaws, Bill lashes out because he thinks he’s owed more.

He embraces violence because he’s convinced his rage is reasonable. In the end, it’s just one of many delusions about self and society.

For all the fancy words about nationhood and nostalgia, Bill’s attack on a Korean store owner is unbridled racism. Hence the shot of a smashed box of ornamental flags. Bill invokes “America” when it’s convenient to his prejudice, with little care for the responsibilities of patriotism.

His breakdown isn’t due to a hot day or a crappy car – or an overpriced can of soda. The pressure has been building for months and years. That hole in his shoe didn’t appear overnight; it’s the physical symptom of long-term unemployment and hardship.

This begs a question of Bill and all those like him: is racism bound by hatred of Otherness, or is it (also) an outlet for the frustrations for people who can’t or won’t get angry at those with power?

After all, Bill may be mistreated by state and society, yet rather than aiming his rage at structural failings he punches down on people who face greater challenges. His racism is a convenient but lazy response, an easy retaliation when life kicks you (also central to 1998’s visceral American History X).

This somewhat answers the contradiction of Bill’s jingoism. He despises the immigration that makes his city a foreign, unfamiliar place – yet is married to an Italian woman. It doesn’t have to make sense; it only has to be convenient.

On the other hand, the way he treats wife Elizabeth is a big clue that Bill isn’t the hero he claims to be.

Falling Down and trading up

Bill’s white-collar identity at the start of the film is a costume. He pretends to go to work every day in the same way that he pretends he’s still a family man.

Underneath the artifice, he’s sweating – in fact, that’s how the film begins. Then he snaps, and begins trading up to ever more unstable identities.

He steals a baseball bat, then swaps it for a knife, which becomes a bag of guns … and a rocket launcher. Each time he levels up: from working stiff to vigilante to mercenary.

Incidentally, this is a variation on action films that take an average guy and reveal the hero hiding within all along (see The Hunt for Red October).

Bill acknowledges the transformation when he discards his briefcase, the badge of corporate America:

His car is another symbol of corporate and consumer obedience. Ditching it means getting off the beaten track and into the unknown. But rather than discovering some Waldenesque idyll, well, it’s tough at the bottom of society.

And yet Bill’s continually surprised that his transformation frightens others. “I’m not the thief!” he yells … even as he robs Mr Lee of income and safety.

To be fair, the universe seems to confirm this as a warped kind of heroism. When he’s caught in a drive-by shooting he doesn’t even have to duck for every bullet to miss him. What’s that if not the invincibility of superheroes?

By the end of the film, the tragic reality is staring him in the face. Prendergast calls it based on experience: Foster will kill his wife and kid, then himself.

Needless to say, Bill is astounded:

“How’d that happen? I did everything they told me to. … I helped to protect America. You should be rewarded for that. Instead they give it to the plastic surgeons. You know, they lied to me.

The ambiguity of violence

If there’s any ambiguity to the character, motivations and responses of the man they call D-Fens, it’s at least partly steered by his being a white, middle-class man.

Falling Down’s black / bleak comedy is a sardonic look at modern life. It’s fictional – yet the same scenarios play out every day in real life to quite different ends for those outside the protections of whiteness, class, education and other things that buy leniency. Note too that Foster the killer gets a long conversation with an understanding cop, before choosing suicide as an exit route.

The discomfort of prejudice, plus the character’s complexity, makes Falling Down a fascinating film. It says an awful lot about the human condition – much of it under the radar. The story is tragic but funny. The main character is both horrible and deserving of sympathy. His troubles are universal, but his responses suck.

Society says we should be defined by our jobs, which is all well and good until the jobs disappear. Unemployed Foster instead falls from one identity to another, as if trying to find himself.

As he lashes out at strangers and immigrants, he’s really fighting the unrecognisable aspects of himself.

“If you hate a person, you hate something in him that is part of yourself”

Foster, now an outsider, hates foreigners. He lacks money (and love), so has no sympathy for poverty in others.

Unable to fix himself – because of course what ails him are structural failings – he’s increasingly adrift from self and reality. When the Nazi storekeeper proclaims, “I’m you!”, he shoots his reflection in disgust. Who wouldn’t?

“I guess you could say D-FENS is like Los Angeles. For both of them, it’s adjust-or-die time – that’s what the movie is about.” [screenwriter Ebbe Roe Smith in the Los Angeles Times]

Like the protagonists in Heat, Prendergast and D-Fens are doubles. They’re mirror reflections: similar and in sync, yet at the same time complete opposites.

Here, both take heat from crappy colleagues and strangely distant wives, yet respond in very different ways. Prendergast – like Seven’s Detective Somerset – continues to fight for a flawed world, while Foster takes up arms against it.

Each has lost a daughter, too. Prendergasts’ child dies in her sleep. Foster is separated from his by a restraining order.

Both are haunted by ghost images, an array of blink-and-miss-it shots of young girls that peppers the film. They crop up in yards, car windows, photos and advertisements, as if tracking the men across the city. Or, for Foster, like a homing beacon.

Inevitably, the men end up on opposite sides of the law as cop and killer. And in recognition of their twinned status, only Prendergast can connect the dots and catch-up with Foster.

The mechanism of the double usually means that, while the two characters effectively complete each other, the plot can’t sustain both of them. One usually over-writes or overcomes the other (see also Gattaca).

Falling Down teases our subconscious sense of this with its playful take on the superstition of the cop’s last day. In movie lore, Prendergast’s odds of retiring alive are slim.

Of course Prendergast can’t die – and I think we know that long before the end. If Prendergast dies, Foster lives. Yet the plot tells us repeatedly that Foster is obsolete, because his attitudes are out of step with modernity.

At the start of the film Foster has lost his family, so his quest is to win them back. He even says repeatedly that he just wants to go home (though what he really means is a return to less complicated times and the nostalgia of the past) .

Only Prendergast, his other half, knows this is impossible: men of Foster’s mindset are like bullets already fired.

In the end, this is the tragedy of the story writ large. Foster is so far from self and reality that he thinks he’s walking a righteous path – back to American values, to the past. His fall from grace begins long before he plunges from a pier.

The descent begins when his job disappears, along with his family and social support. He’s falling all the way through the film, a one-way journey with a deadly and tragic trajectory.

Falling Down (1993), directed by Joel Schumacher

A brief introduction to The Machine Stops, by E.M. Forster