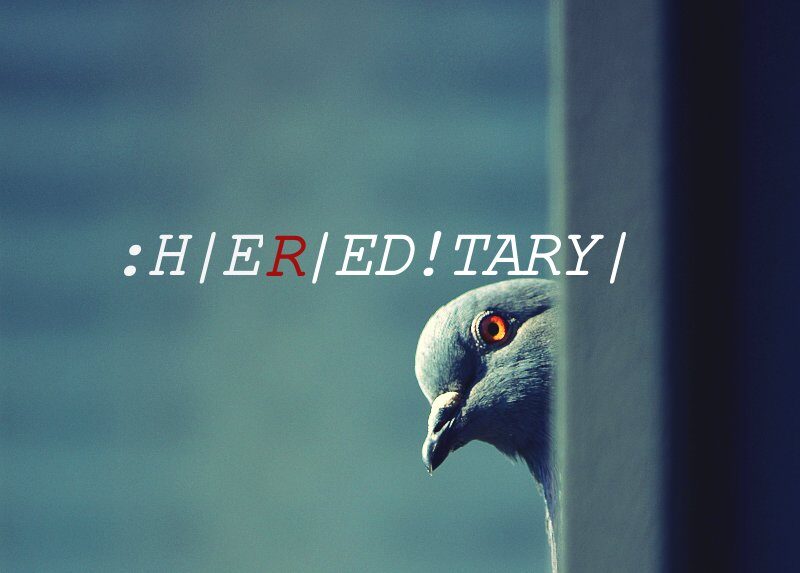 From fun-size houses to larger-than-life horror: how Hereditary blurs the lines between models, madness, psychosis and reality.

Annie Graham (Toni Collette) is a miniaturist. She turns personal history and trauma into diorama and dolls houses – and she has lots of material to draw from.

First her mother dies after a long and difficult illness, then her children are involved in a macabre accident. As grief tears them apart, the family find themselves at the mercy of dark forces and disturbing events.

This page unpacks symbolism and storytelling in 2018 horror film Hereditary with spoilers … and sleepless nights, probably.

The source of unease

Hereditary is a curious horror film, in that its biggest scares happen once the movie is over. Unlike Poltergeist and The Ring, it doesn’t rely on everyday objects (TVs, telephones) to trigger this post-credits reality – though it certainly has fun with tongue clicking.

Aside from intense blips of violence, the film has few jump scares. Instead, it creates quietly disturbing images that linger (hello, dead grandma in the attic …).

The story’s hypnotic symbolism and abstract ideas are particularly tricky to pin down – a lack of closure your brain may try to resolve long after the story is told.

And while Hereditary uses well-worn tropes of the supernatural, it wraps them in human vulnerabilities such as death, grief and madness – all things that truly frighten us.

So. Having sketched out its modus operandi, here are some ways in which the horror works, and what it says about satanic ritual, symbolism … and very small things.

What Hereditary is all about

Strip away the supernatural flights of fancy, and Hereditary tells a simple and recognisable story about a family consumed by grief.

Annie’s relationship with her mom was always tricky. Even without dissociative identity disorder and dementia, Ellen was manipulative and coercive. Despite this, her death hits Annie hard, and leaves her trying to reconcile loss with resentment.

When Annie later glimpses her dead mother in the corner of the room, it’s an omen of the horror yet to come. But at the same time, seeing or hearing people we’ve lost is a normal symptom of grief – there’s nothing super-natural about it. (See also Don’t Let Go)

Thirteen-year-old Charlie (Milly Shapiro) is more distraught. She was much closer to grandmother Ellen – for reasons that eventually rip this ‘simple’ story apart at the seams.

While family members have very different reactions to bereavement, each deals with it in private. Consider the way Annie sneaks off to counselling, for instance.

This dynamic becomes untenable when Charlie dies. Like many couples who lose a child, marriage can’t sustain Annie and Steve (Gabriel Byrne). Rather than drawing the family together, bereavement destroys them. Annie sums up the tragedy during one explosive dinner: “What a waste!”

Ellen’s death, then, is a kind of preamble. It introduces the film’s duality – unbearable loss and supernatural horror – and bridges the gap between them. Charlie’s death amplifies both.

After she’s decapitated in a car accident, the film leans into the visceral horror of losing a child. It’s a brutal scene, with a motif that comes to stand for the trauma of death. When grief takes hold it’s easy to lose your head, become a prisoner of your thoughts, or lose touch with reality altogether.

Hereditary, horror and metaphors of grief

Overlaying the tragic tale of a family destroyed by grief is a second story about possession and demonic ritual.

Now, on one hand, these fantastical elements are an extended metaphor for grief. Like elements in a painting, they transform the pain of bereavement into stark and disturbing imagery.

When Annie holds a séance for Charlie, it’s not a hundred miles from seeing her dead mother in the corner of the room. People die, and sometimes we don’t want to let go. Taken to extreme, excessive ends, we find ways to bring them back through fetish (Rebecca) or reanimation (Flatliners, Pet Semetary). In Hereditary, it’s through a warped kind of spiritualism.

Similarly, Peter’s (Alex Wolff) guilt about Charlie plays out through psychosis because he’s haunted by his part in her death. After the accident, he can’t shake the image of a rear view mirror fixed in the centre of his reality, just like the night he killed Charlie.

In this sense, the film’s horror narrative is a play on having ‘the devil on your back’. That is, the concept of the eternal human struggle between good and self-interest (the latter is much the easier – see The Devil’s Advocate).

Members of Ellen’s coven choose self interest. They believe resurrecting a demon king will bring them rewards and riches.

Incidentally, when Peter discovers dad Steve’s charred body, we see what he can’t – the demonically possessed Annie crouching on the ceiling. This is literally the devil on his back. Like the night of the accident, terror once more lies where he can’t bear to look: behind him.

Yet what makes Hereditary so effective is that the horror exists in its own right, too. It doesn’t just subvert a narrative about grief, but has roots that predate the story we see on screen.

Some grandmothers join knitting groups; Grandma Ellen joins her local demonic cult. She’s not just a card-carrying member, either. She’s its queen … with sticky ramifications for her family.

The coven is dedicated to the resurrection of the demon Paimon, one of the eight kings of hell. Pulling it off means decanting Paimon’s spirit into a human body.

The human body in question is initially Charlie’s. In fact, Ellen’s been grooming her for this since she was a baby.

It’s likely Charlie is already possessed, or certainly under the influence, at the start of the film, btw. This would explain why:

Annie explains she wouldn’t let Ellen near firstborn Peter, “which is why I gave her my daughter, who she immediately stabbed her hooks into”. It’s a telling phrase, and implies Annie may be more complicit than she lets on.

It also lends an interesting ambiguity to Charlie’s question after the funeral: “who’s gonna take care of me?” This may be grief speaking or her demon … or both.

Charlie’s also upset because Ellen wanted her to be a boy (apparently Paimon is gender-choosy). Annie’s reply reveals something interesting: she was a tomboy, too.

This suggests Ellen’s demonic ambitions go back years. For instance, Annie’s brother hanged himself after blaming Ellen for “putting people inside him”. Meh. You say people, I say Paimon.

As is often the misfortune of horror movie families, the Graham home becomes the epicentre of demonic activity.

More over, Ellen’s coven keeps protective watch over the family (or rather, the host bodies) in various ways. Consider:

Annie’s dioramas mirror this demonic undercurrent. Consider the way she copies ‘the writing on the wall’, into her miniature scenes, for instance.

They also reveal the hidden history she won’t say out loud. When Annie sees dead Ellen in the corner of the room, her first instinct is to hide a diorama. Why is that?

Well, the blink-and-miss-it miniature shows Annie in bed with a baby, and Ellen with her breast out as if to feed it. This dovetails with explanations that Ellen wouldn’t let Annie feed Charlie, and the women’s conflict over the children.

What does ‘hereditary’ mean for Annie?

Horror has long made monsters of illness, carving sub-human killers from the symptoms of disease and dysfunction (see the birth of vampire legends).

It’s an affinity that speaks to centuries of misunderstanding and fear of mental illness, as well as the ambiguity of treatment Vs torture. Shutter Island has interesting things to say about the latter.

The Bible offers a glimpse into the genre’s roots, where possession looks a lot like mental trauma. In turn, horror has merged narrative tropes of possession and psychosis. As per the story of Legion, these include super-human strength, self-harm, and identity disorders.

It’s an unfair alignment, and hard to excuse in contemporary stories. Nonetheless, it chimes with Hereditary’s coupling of mental illness to possession.

One implication is that Annie stands to inherit mental illness, exactly as befell her parents and brother. “That was my mom’s life”, she tells her grief meeting, not realising it may be her fate, too.

Later she worries dormant patterns (sleepwalking, immolation fantasies) will return with a vengeance.

The horror that follows is thus metaphor both for grief and emerging psychosis. Annie slowly spins out of touch with reality; Steve blames himself for going along with her delusions.

None of them are immune to the symptoms of madness, though. Steve resorts to pills, while Peter sinks into a dark dream-world. And Annie … Annie climbs the walls.

Interestingly, the switch happens at Charlie’s funeral. The camera runs parallel to the coffin being lowered into the grave, as if we’re following the family into the depths.

The scene that follows is distorted as Peter peers through a coloured window. In other words, he’s peering through a glass darkly, and suddenly we’re not in Kansas any more.

Ellen’s cult commitment invokes another kind of inheritance. The women in the family must sacrifice themselves to resurrect Paimon in male form, and each must lose their heads to do it. No, it makes no logical sense, but religious ritual is rarely grounded in reality.

Various signs point to the inevitable resolution of this ancient prophesy:

All of this, then, is because Peter’s body is the real prize. Thus Joan intones to the newly awakened Paimon that they’ve “corrected your first female body and give you now this healthy male host”. Which is a bit of a cheek, all things considered.

Whose house are we watching?

Ultimately, Hereditary is a sideways take on the haunted house story. But, Russian Doll-like, there are a number of nested houses to this narrative:

So Hereditary is about a haunted house – but which one?

The cinematography reinforces this ambiguity, to the point where we’re never quite sure what we’re seeing.

There are times when Annie’s replicas seem to stand in for scenery and location shots. At other times, real environments are stylised to resemble the models. This is most obvious when outdoor shots switch jarringly between night and day, for instance, but equally in rooms which could all be dioramas.

Most memorable of all is the stunning opening shot, which slides across a dolls house and into one of the bedrooms. This doesn’t transition into Peter’s bedroom, by the way; it is his bedroom.

In the end, is anything we see grounded in reality, or is it all one more dolls house diorama? Well, as any film or work of fiction, it’s weighted toward the latter. The story takes us in and out of a dizzying series of models of different scales; by the time we get to the end, the last remaining characters are stranded among life-size puppets.

The film’s wild finale, then, is mapped out from the very beginning. The story, like its satanic scripture, sets up a poisoned chalice of inheritance – and it’s a bitter brew.

The significance of the colour white in Fahrenheit 451