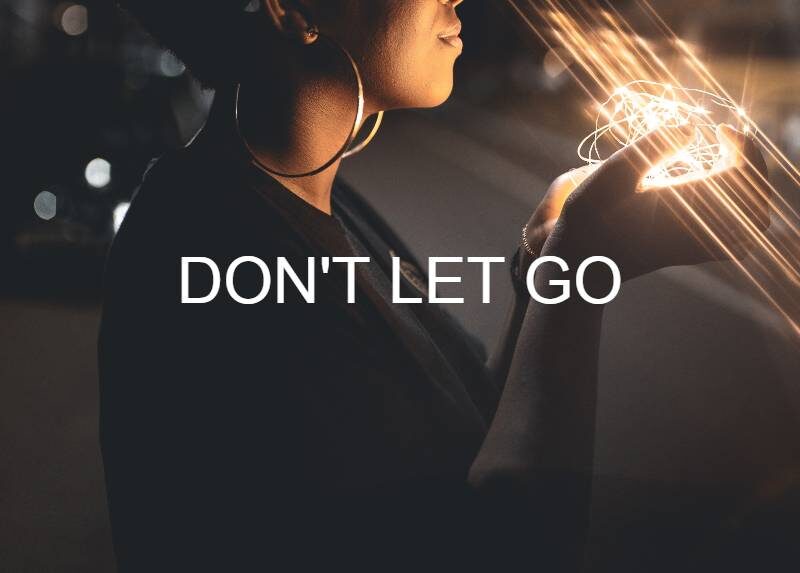 Don’t Let Go is a sci-fi thriller with a side of grief, guardian angels and reincarnation. Here’s how it plays out.

What is Don’t Let Go about?

L.A. detective Jack Radcliffe (David Oyelowo) is a father figure to niece Ashley (Storm Reid), so he’s distraught when she’s murdered in cold blood. But then she starts calling him for cosy phone chats …

Don’t Let Go is a genre-defying sci-fi thriller: it’s a little bit Inception with a hint of Arrival. It may lack the big-budget effects – and closure – of these latter movies, but its bold storytelling packs a punch.

There are several ways of reading the movie, from time shifts to parallel dimensions. In fact the story appears to use several of them at the same time.

Let’s break out the spoilers.

A film about grief

Don’t Let Go is about grief: it’s right there in the title. The dreamlike plot is an allegory for bereavement, a time during which – for a while – nothing makes sense.

People who experience bereavement hallucination might believe they can hear, see, feel or are speaking to someone they’ve lost.

This mirrors Jack’s grief. He can’t believe Ashley is gone, so he creates a reality in which she’s still available.

But while the movie is about grief, it’s possible Jack is dead, too.

How many times does Jack die?

Jack dies after the drive-by shooting. We hear his heart monitor flat line and there’s a red flash (which seems to denote some kind of reality shift). Afterwards, the details of Ashley’s murder have subtly changed.

The red flash appears again at the end of the movie, suggesting fake friend Bobby kills him here, too. But this time, Jack – or a version of him – makes the leap home to reunite with Ashley.

In Buddhism and Hinduism, achieving nirvana (enlightenment) breaks the cycle of reincarnation and ushers souls into the afterlife.

And that’s kind of what happens to Jack.

He dies and is reincarnated several times before eventually making the right choices that take him back to Ashley (see also Edge of Tomorrow).

Of course, this leaves the possibility that Jack is already dead at the start of the film, and what we watch is yet one more cycle of reincarnation.

The oddly self-contained movie universe leans towards this with its dreamlike setting, in which only Jack and Ashley have any depth.

They interact with two or three other characters, but mostly with each other. Ashley doesn’t have any friends. And when we glimpse passengers or pedestrians we don’t see their faces or hear them speak – they don’t have any substance.

There’s a cheeky nod to this in the opening scenes, when Jack asks Ashley what movie she saw and she replies: “Zombies!” And there are other teasers, including when Jack says “this is a nightmare”, and when Ashley jokes he has ESP.

The chaos of choice

For Jack, these choices and consequences depend on whether or not he’s available to Ashley. For example:

These choices play out over multiple timelines, because the first murder somehow opens a wormhole that connects Jack’s present with Ashley’s past. The movie explains this as an answered prayer:

“I pray that God will give me a second chance.”

Either way, once Jack figures out he’s living two weeks into Ashley’s future, he uses hindsight to influence her choices, too.

This works a bit like the illusion of parallel train tracks that seem to converge in the distance because of perspective.

However, Jack and Ashley’s timelines do intersect, for instance, when Ashley paints the red X on the garage door. Jack’s vision distorts slightly, as if a touched by a ghost (which is another possibility – Ashley is a ghost).

Initially, the closest they get to each other is when they ‘meet’ in the diner two weeks apart – we even see them sitting almost within touching distance.

Eventually, Jack is able to nudge their timelines back together (though keep in mind that the Jack who survives at the end of the movie knows nothing about the murders, Bobby or the wormhole).

Ashley’s dad is no good. He’s a drug addict who can’t stay out of trouble. Even when Bobby warns him to get out of town, Garret puts himself – and his family – in harm’s way. Jack is the opposite. He’s a hard-working cop and a caring uncle.

Jack’s relationship with Ashley is similarly idealised. While her parents repeatedly let her down, Jack steps up time and again. He’s quite the guardian angel. [Perhaps it’s Jack who is in the afterlife and looking out for Ashley.]

“He forgot an obligation with my niece, which wasn’t really erratic – it was typical.”

Ultimately, the film rights the wrongs of undeserving parenthood. It bumps off mum and dad, and (eventually) brings Jack and Ashley together as a healthier family unit.

How do they save each other?

The film ends with a number of realisations and alignments. Bobby is the mysterious Georgie, a dirty cop who works for drug gangs. He kills Garret’s family as payback. By the time Jack realises this, it’s too late. Bobby tells Jack to kneel down so he can execute him.

But Jack also has a realisation about reincarnation / time travel / choices. He tells Ashley:

If you save yourself, you’ll save me. If you save me, I will save you.

This is where all kinds of plurality converge:

If Ashley escapes from Bobby, she doesn’t die. There’s no murder and no investigation that leads to Bobby killing Jack. Instead of dying, Jack is at home – where he can answer the door in time to save Ashley from Bobby.

It’s a bit of a Möbius strip. But it’s what makes this film infernally tricky and – if you like that kind of thing – pretty cool.

The Menu (2022): taking a bite out of entertainment culture | Review