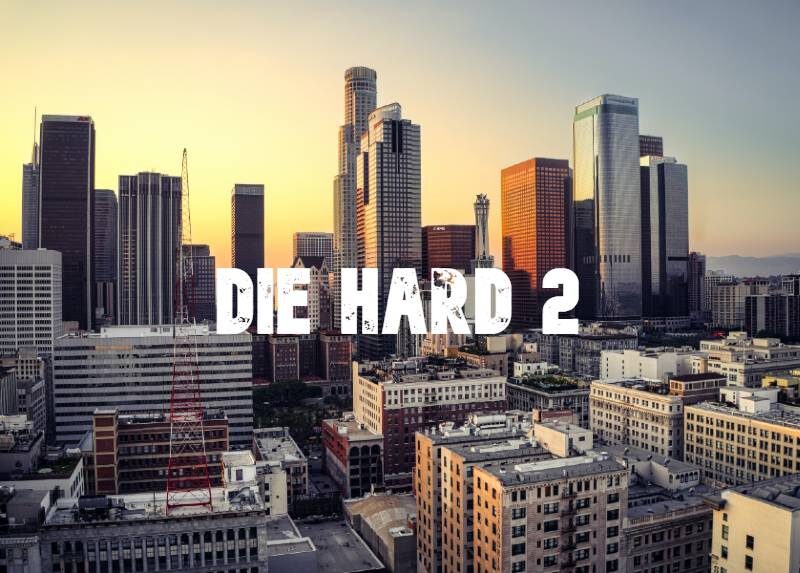 From pacing to symbolism, Die Hard 2 depends on John McClane being a smoker – and them’s the fax. Spoilers. Obviously.

About 10 minutes into Die Hard 2, McClane (Bruce Willis) sits in the airport bar and smokes a cigarette without using his hands. It’s a striking image – and this is saying something for a film laden with graphic violence and William Sadler’s ‘naked ballet’.

McClane lights up, then stows both cigarette pack and lighter in different pockets simultaneously. For a few seconds he’s hands-free but still puffing away (while also identifying that some folk are up to no good).

But whether McClane smokes with his hands, a hookah or gay abandon – so what?

In 1990, the year Die Hard 2 was released, 1 in 4 U.S. adults were smokers, yet we see very few characters smoking on screen, not even for background realism. McClane is different. But different how – and why does smoking seal the deal?

McClane is the kind of guy who can battle the forces of evil and single-handedly save the planet. He has to: his own team is a liability. They’re semi useless (Trudeau), totally useless (Capt Lorenzo) or deadly turncoats (Major Grant).

The good guys are subtly clipped – emasculated in some fashion – so that they never outshine McClane. The bad guys may be hyper masculine, but McClane always wins in the end.

McClane is the only smoker in the same way that he’s a lone hero – or rather, lone ranger. In fact, McClane is a very particular kind of cowboy: he’s the Marlboro Man.

Marlboro Man (or the Marlboro Cowboy) was a marketing campaign for the cigarette brand. The ads ran from the 1950s to the 90s, and came to stand for “the ultimate American cowboy and masculine trademark.” (AdvertisingAge)

In both Die Hard and Die Hard 2, Hans Gruber and Capt. Lorenzo even refer to McClane as another archetypal cowboy – John Wayne.

But if McClane is a lone hero, it’s partly because of class.

Smoking is more common among lower earners. Former UK Health Secretary John Reid once called it, “one of the few pleasures left for the poor on sink estates and in working men’s clubs”. So McClane smokes, and we get the measure of the man.

He’s a working class white guy thrust into worlds he doesn’t belong. His enemies use high-tech gadgets; he uses hands and fists and street smarts. His wife belongs to the new world; he’s a salt-of-the-Earth beat cop.

Smoking works on film. It’s purely visual, with none of the smell or the nagging health concerns. It also has a history of standing in for sex or sexual attraction, though the need for that particular symbolism has fallen out of fashion.

“There is no need for phallic symbols today when naked breasts and naked bottoms jiggle and bounce a foot from the camera,” Aljean Harmetz wrote in the New York Times (article may be paywalled).

Die Hard 2 isn’t that kind of movie, but it’s interesting that its single scene of overt flirting is also one in which McClane is smoking.

The sight of McClane hooking up with Al Powell by phone ‘n’ fax is clearly too much for the young woman whose equipment he borrows. She suggests they meet later but McClane – in charge, masculine … goddamit, a cowboy – taps his wedding ring and tells her he’s after “just the fax, ma’am”.

There’s a similar turn of events in the first Die Hard movie, when McClane catches the eye of a young flight attendant. He clocks her glance and looks back … but waits until reaching the baggage carousel to light up.

As Harmetz puts it: “Until some brave new world allows frontal male nudity, cigarettes will probably remain a handy shorthand for potency, even though, in our less subtle age, guns have taken over much of that function.”

Smoking as an emotional cue

Cinema is no place for poker players: the audience has to see emotions to know they’re there.

Smoking shows McClane’s frustration when he can’t stop flight Windsor 114 from crashing. It’s a segue between killing a guy with a baggage carousel and McClane connecting the dots. And it’s a victory dance after he ejects from the General’s plane seconds before it explodes.

Presumably McClane smokes at these points because it’s easy for the plot, and because as the masculine ideal his options are limited otherwise. Though, to his credit, he does cry – kind of – when he can’t avert a plane crash.

For McClane, cigarette breaks are down-time from slaughter – for him and for us: they’re a breathing space between action sequences.

The mystery of the never-ended cigarette

Die Hard 2 has more than 2 hours of screen time to play with, but ain’t no one got time to watch McClane smoke a whole cigarette. McClane lights up on screen six times (and only five times to smoke a cigarette).

Shots of McClane smoking are brief and almost subliminal. It’s like a character tic or a catchphrase – except here, the important thing is that we see or sense that McClane is a smoker. Why? So that we know he has a lighter. Why? Because it’s that lighter which he uses to spark a plane’s leaking fuel to literally bring down the bad guys. (See: Chekov’s Gun)

Sure, if McClane wasn’t a smoker there could have been some other way to introduce a lighter but that would have meant less time to see a guy being stabbed in the eye with an icicle, an unarmed pensioner being shot in a church, or a villain being shredded by a plane’s propeller.

Rather than killing off McClane with some long drawn-out cancer, smoking kills off the crooks instead, allowing him in turn to save his wife’s plane (and, as a consequence, a number of other planes in the vicinity).

Smoking may have fallen out of fashion off-screen but in Die Hard 2, its functions remain frozen in perpetuity. Smoking doesn’t just seal the deal … it saves the day. But only in Hollywood.